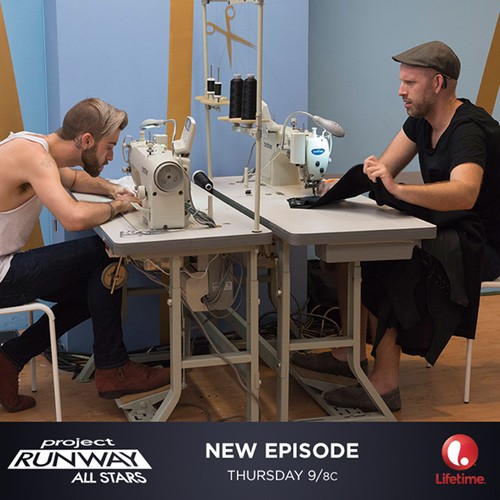 On the last episode, the designers had to create feminine looks from the masculine materials at a construction site. Did you watch the last episode? If you missed it, we have a full and detailed recap right here for you.

On tonight’s episode as per the Lifetime synopsis, “with exclusive access to the Broadway musical, ‘Wicked,’ the designers compete to create couture inspired fashion. What a treat for Project Runway fans!  Michael Costello,  Justin LeBlanc and Mondo Guerra will present their latest collections.”

Tonight’s episode of Project Runway Allstars kicks off with the designers arriving at the Wicked set at Gershwin Theater.  Alyssa Milano arrives and says that there are two sides to every story just like in the musical Wicked, so this week will be a fashion face-off of good and evil.  The designers will pair up and face off against each other.  Justin will be facing Fabio, Kate is going up against Sonjia.  Helen will be competing against Benjamin.  Michelle versus Chris.  Sam and Jay are going head to head, as well as Dmitry and Gunnar.  Tonight they’ll be creating couture gowns, with either good or wicked themes.  And, they will each only have a budget of $200.

The designers get sketching.  Sonjia decides to branch out and add pants to her gown.  Fabio is working on an upscale gown as well, and he has decided to add pants because he doesn’t think anyone else will do pants.  After sketching, the designers head to Mood fabric store to pick out their fabrics.  Chris is making an evil gown, he decides to use gray fabric because he knows everyone else will be using black.

After fabric shopping, everyone heads to the design room to stark working on their gowns.  Justin gets to work and confesses he is intimidated about going up against Fabio, he thinks he is one of the best designers there.  Gunnar is determined to beat Dmitry because he is sick of him underestimating him as a designer.

Chris checks out Helen’s dress and is impressed, he thinks she is going above and beyond.  Sonjia checks out the competition, and Kate is having a tough time making a wicked dress and not a pretty white dress which she usually makes.

The designer’s mentor Zanna Roberts Rossi arrives at the workroom to check out their dresses and critique what they have done so far.  She announces that the winner of this week’s competition’s dress will be put on display at the Gershwin Theater.   Zanna stops by Chris’s gray dress first, and tells him to make sure it doesn’t “look crafty.”  Chris’s competition Michelle’s dress is much more minimal than his, Zanna tells her to make sure it is perfect though since it is so minimal.  Zanna is not a fan of Fabio’s dress and thinks that he has too much going on and reminds him what happened to Alexandra last week.  Zanna gushes over Sanjia’s dress, she warns Helen that her dress looks like a shower loofa.  Sam’s critique doesn’t go well either, and Jay is confident that he will beat her and win the competition.

The models arrive for their fitting, and Chris and Michelle gather around Fabio’s dress and offer him advice, which really annoys Dmitry.  Everyone gushes about how great and sparkly Sam’s dress looks.  Chris laughs that some of the designers and completely scrapping their dresses.  Fabio is in over his head and has way too much work to do at the end of the night, he is scared he won’t finish in time.

The next day the designers rush back to the workroom to finish their dresses before the runway show.  The models arrive to be dressed, and Chris is happy with how his dress looks once he gets it on the model.  Dmitry lectures model to “bring the drama” on the runway, and Michelle laughs behind his back that his dress isn’t even couture – it looks like a ballroom dress and you can “see his model’s cooter.”  The designers to the models to the salon to get their hair and make-up done.

It’s time for the Good VS. Evil runway show.  Alyssa takes the runway and introduces the judges, Isaac Mizrahi, Betsey Johnson, and Modern Family actress Ariel Winter.  The designers take their seats and the models begin parading down the runway in their dresses.

After the judges’ critiques and deliberation, it is time to announce a winner.  Alyssa announces that Dmitry and Sam are safe, this week’s winner is Sonjia – her gown will be on display at Gershwin Theater when the musical Wicked is being performed.  Fabio and Helen are safe, Chris is officially eliminated from Project Runway Allstars.