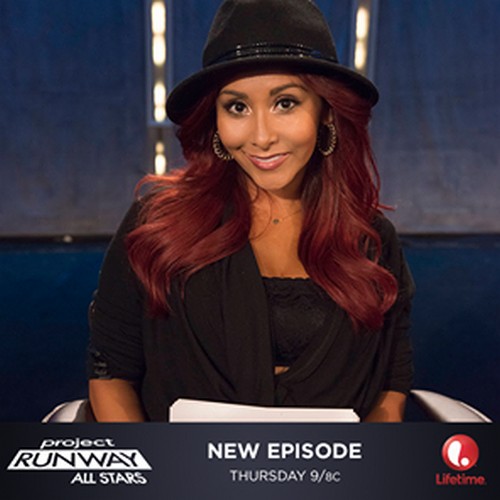 On the last episode, the designers create collections inspired by New York’s uptown or downtown scene. After careful deliberation, the judges announced that the winning designer was Fabio.  And, Patricia was officially eliminated. Did you watch the last episode? If you missed it, we have a full and detailed recap right here for you.

On tonight’s episode as per the Lifetime synopsis, “the designers must create feminine looks from the masculine materials at a construction site.”

Tonight’s episode of Project Runway kicks off with Alyssa Milano giving the allstars their next challenge.  She takes them to a warehouse full of construction equipment and building supplies and tells them that they have 15 minutes to gather supplies to build their next design.  The designers get a little violent and begin feuding over what supplies belong to who.

He designers take their trash bins full of hardware supplies back to the workroom to get started.  Benjamin and Justin realize that they are both working with the same supplies – and are concerned that their dresses are going to be identical.  Meanwhile, Jay is irritating everyone by loudly shredding a tarp by hand.  Michelle gets busy putting together a chevron dress made out of construction worker’s vests.

The designer’s mentor Zanna Roberts Rossi arrives at the workroom to check in on the designers’ progress and critique their designs.  She’s impressed with the corset that Chris is making out of bungie cords, but she is concerned because Dmitry is making almost the exact same thing.  Jay’s belt made out of nails is interesting, but Zanna says that it is not feminine enough.  Justin’s design is a hit – Zanna dubs it “beautiful.”  Michelle’s chevron dress worries Zanna because the judges might think that it is too sporty or manly.

After Zanna leaves, Sonjia panics and scraps her entire dress and begins putting together a new one with construction tape.  The models arrive for their fittings, and  all of the designers laugh at Alexandra’s dress once it is on her model.  Michelle laughs that the dress looks like the model got drunk and on her way home from the bar fell in a construction site and got fence stuck to her dress.

The next day the designers head back to the workroom to put their finishing touches on their designs.  The models arrive to be dressed, and Alexandria struggles with her fence/cage dress.  The designers head to the salon to pick out their models’ hair and make-up looks.  Justin is thrilled with his model’s finished look, but Chris is scared about what the judges are going to say.  Sonjia is done with her caution tape dress and is very proud of herself.

It’s time for the runway show, Alyssa Milano takes the runway and introduces the judges Georgina, Isaac, Ellie and guest judges from Jersey Shore – Snookie and J-Woww.  The designers take their seats, and the models begin marching down the runway in their construction site designs.

After the runway show, Alyssa announces that Dmitry, Fabio, Helen, Sam, Gunnar, Benjamin, and Sonjia are safe and excuses them from the runway.  The remaining six designers left on the runway are the top three and bottom three designers of the night. Kate is up first – the judges have mixed opinions, some of them love that she used the back of tiles and think it is dainty, but others thinks it is “too arts and craftsy.”  Snooki gushes that she wants to wear it to her wedding.  Michelle’s dress is popular, but the judges think she is slacking and needs to “up her game.”  Justin’s zip-tie dress is a hit with the judges and

Alyssa claims it shows how smart of a designer he is.  Alexandria’s fence/cage dress is “too costumey” and reminds them of spiders, Ellie likes it though.  Jay’s tarp dress and nail necklace is pretty popular among the judges, Snooki and J-Wow say it looks like a “fabulous garbage gar dress.”  The judges excuse the designers so they can decide on a winner.