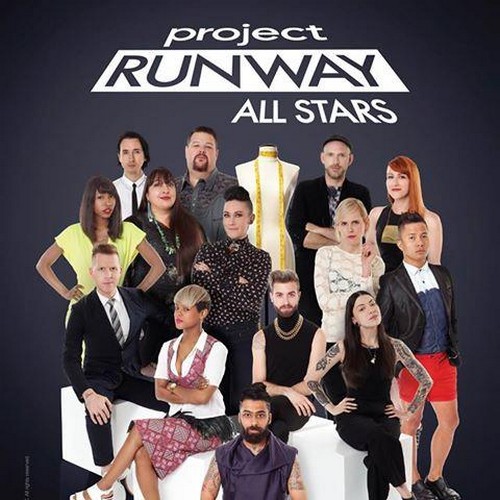 Tonight on Lifetime Emmy Award winning Tim Gunn’s Project Runway All Stars 2014 continues with an all new Thursday December 11, season 4 episode 6 called, “Luck Be a Lady” and we have your weekly recap below. On tonight’s episode a fashion gamble tests the all-star designers that remain: Fabio; Sonji; Sam; Michelle; Justin; Gunnar; Jay and Dmitri .

On the last episode, the designers met royalty in London and used this meeting as the inspiration to create winter wear. Did you watch the last episode? If you missed it, we have a full and detailed recap right here for you.

On tonight’s episode as per the Lifetime synopsis, “The stakes are high as the designers roll the dice on the runway for a fashion gamble.”

Tonight’s episode of Project Runway All Stars begins with Alyssa greeting the designers, she announces that this week’s challenge is a “fashion gamble.”  Each designer will be given the chance to choose their own fabric and style.  They will have to roll a pair of dice to see what their combos will be.  They roll the dice and this is what fabrics and events they wind up with.

Once they know what their assignments are they head back to the workroom to get started on their designs.  Gunnar is feeling inspired by butterflies and wants to make a wrap dress that feels like a caccoon.  Helen gets to work on a fitted brocade dress, Justin is feeling lucky that he got an easy assignment, but he has decided to think out side of the box and make a short dress for a gallery opening.

The designers head to Mood to pick out their fabrics, Michelle decides on four hideous lace fabrics and is certain that if she puts them together the combo will be pretty.  Fabio finds a pink denim and meanwhile Dmitry makes his way to the velvet section and finds a metallic fabric that he knows will be difficult to work with.

Everyone heads back to the design room and Dmitry gets to work on a velvet jumper.  Sonji has a hot pink brocade that she knows is going to shock the judges.  But, none of the designers are happy because they don’t think that her fabric is brocade, it’s actually quilted.  Everyone is gossiping about her fabric being the wrong type, so Fabio decides to be a good friend and tell her that if she uses it she may be disqualified because it is not brocade.  Sonji is not happy, but she doesn’t want to take a chance so she decides to use a much less exciting brocade fabric that she picked out.

Zanna arrives at the work room to check in on the designers and critique what they have done so far.  Zanna loves Michelle’s layered lace look so far and thinks that it is “classy.”  Gunnar is working on a feathered top and Zanna warns him that if he doesn’t position the feathers correctly it will look like his model has a hairy chest.  She isn’t exactly smitten with Fabio’s jumper either, and informs him that the ugly pink color looks like Pepto-Bismol.  Zanna lectures Sonji that her dress looks too cheap, and she needs to do something to give it some oomph before the judges see it.

The models arrive for their fittings, and Gunnar is thrilled with his model’s skin tone because it looks amazing with his dress.  When Jay’s model puts on the dress, Helen notices that she looks like she is going to the club and she is supposed to be looking like she is going to Sunday Brunch.  Jay is obviously not happy with Helen sticking her nose in his work area and talking badly about his design.  Helen tries to apologize and explain that she was just looking out for him – but he calls her a bitch.

It’s almost time for the runway show and the designers are scrambling to finish up their outfits.  They begin dressing their models – and Sonjia is literally putting a half sewn dress on her model and finishing it as they go.  She has no idea what the finished product is going to looks like.  Meanwhile the designers begin taking their models to the studio to get their hair and make-up ready for the show.

Now, it’s time for this week’s runway show.  The judges and designers take their seats and Alyssa Milano introduces this week’s judges: Georgina Chapman, Isaac Mizrahi, Michael Bastian.  Alyssa reveals that whoever wins this competition- she will wear their dress for a photo shoot in Marie Claire.

After the show Alyssa says that Jay, Dmitry, and Sam are safe this week and they can leave the runway and head backstage.  The judges decide to tackle Helen’s brocade dress first – they aren’t sure why she had a midriff showing and a high slit in the dress, she did a little too much.  Sonjia’s brocade bachelorette party dress receives mixed reviews, the judges rave about Justin’s short silk dress – but they think he is “missing something,” and is a bit heavy with long sleeves. He had the easiest combination – and the judges are confused as to why he didn’t excel in this competition.

After the critiques are over and careful deliberation, it is time to announce the winner.  Alyssa reveals that Helen and Michelle are safe, and Sonjia is this week’s winner.  Justin and Fabio are in the bottom three this week, but they are safe. Gunnar is officially eliminated from Project Runway All Stars.