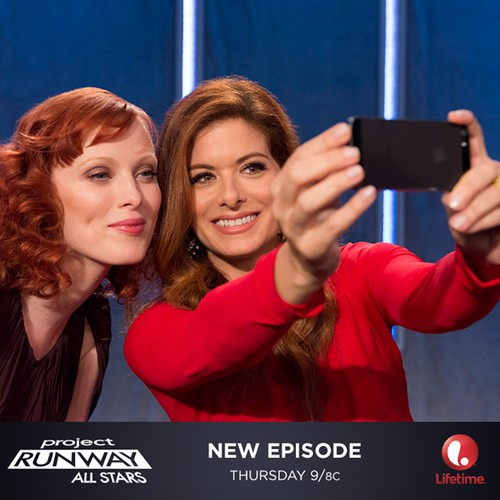 Tonight on Lifetime Emmy Award winning Tim Gunn’s Project Runway All Stars 2014 continues with an all new Thursday December 4,  season 4 episode 5 called, “Designing for the Duchess” and we have your weekly recap below. On tonight’s episode the clothiers meet British royalty in London as inspiration to create winter fashions. Guest judge: Debra Messing.

On the last episode, the designers had to create colorful party dresses inspired by their personal relationships. Did you watch the last episode? If you missed it, we have a full and detailed recap right here for you.

On tonight’s episode as per the Lifetime synopsis, “the designers meet royalty in London and use this meeting as the inspiration to create winter wear.”

Tonight’s episode of Project Runway All Stars kicks off with Alyssa Milano introducing the designers to this week’s inspiration…Paddington Bear. Alyssa announces that she is sending the designers to Paddington Station in London, England. Their flights are booked – and when they arrive in England a special guest will greet them and tell them what this week’s challenge is.

The All-stars rush home and pack, and then board their flight to London. They arrive in London, where their mentor Zanna is waiting for them with special guest Sarah Ferguson, the Duchess of York. Fergie reveals that this week their challenge is to make an outdoor coat inspired the weather in London. Zanna sends them on a tour of London so that they can sketch ideas, and will stop at a fabric store. Sarah Ferguson announces that she will wear the winner’s coat.

The designers board their trolley and begin their tour, Benjamin reminds everyone that he is from London – and even points out the old studio where he used to work. Meanwhile, Dmitry begins sketching and is determined to put a London skyline on his coat. Jay is working on a detailed military style jacket. They arrive at a London fabric, and they each have a budget of $324 to buy the fabric they need for their London-inspired coats.

After their whirlwind trip to London, the all-stars head back to New York to get started on their coats. Dmitry is frustrated because his fabric “didn’t travel well” and is wrinkled and because of the type of material it is he can’t steam it or iron it.

Zanna arrives for her critiques to check up on what the all-stars have done so far. Sam’s oversized moto coat is a gray, and Zanna reminds her that she needs to overplay other features because the color is so underplayed. Zanna warns Michelle that because of the style she is trying to pull off – she needs to make sure her black coat is “impeccable.” Fabio’s coat with its mesh sleeves is a hit, and Zanna gushes that she absolutely loved it. Once again Dmitry and Zanna don’t see eye to eye on his coat, and he plans to ignore her critiques..again.

The models arrive for their fitting, and Michelle is confident that she has this competition in the bag – the only all-star she thinks that will be any competition this week is challenge. Sam is pleased with her coat once she sees it on her model, and decides to make it a little larger since he model is so lanky. Meanwhile, Benjamin doesn’t even have anything done to put on his model – and complains that he has jetlag, and is still feeling down over the negative critique that Zanna gave him.

Time is winding down and the designers head to the studio to pick out their models’ hair and make-up, and put the finishing touches on their winter coat’s with accessories off from the “QVC Wall.” It’s time for the runway show, the designers and judges take their seats and the models begin parading down the runway in their London-inspired winter coats.

After the fashion show is complete, Alyssa announces that Sonjia, Helen, Gunnar, and Michelle are safe and they may leave the runway. It’s time to critique the remaining designers. Justin’s coat is a hit among the judges, especially guest judge Debra Messing. Alyssa gushes that she loves the back of Jay’s coat, but not the front – there is too much going on. The judges think that Dmitry’s coat expresses London style perfectly. Sam’s coat is compared to a “pair of curtains,” and Debra Messing doesn’t like the way the sides lift up. Fabio explains that his coat was inspired by a full-glass building next to a cathedral and the judges are thrilled with his sleeve length and fitting. Benjamin’s coat doesn’t receive rave reviews either.

After careful consideration it is time to announce the winner of this week’s competition. Alyssa Milano announces that Justin and Dmitry are safe – and Fabio is the winner of the winter coat challenge. That means that Sam, Jay, and Benjamin are in the bottom three this week. Alyssa reveals that Jay and Samantha are safe…and Benjamin is officially eliminated from Project Runway Allstars.