Project Runway All Stars Recap “Wear Your Heart on Your Sleeve”: Season 4 Episode 4 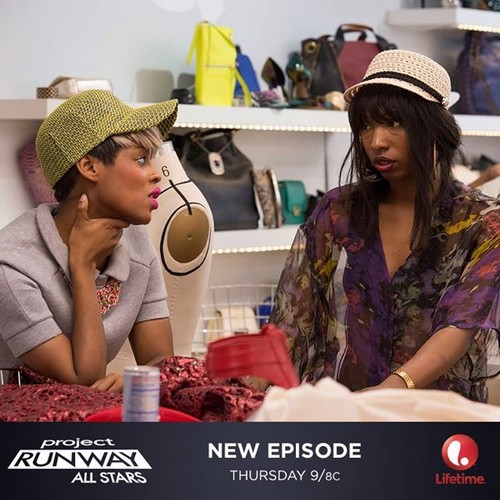 Tonight on Lifetime Emmy Award winning Tim Gunn’s Project Runway All Stars 2014 continues with an all new Thursday November 20, season 4 episode 4 called,“Wear Your Heart on Your Sleeve” and we have your weekly recap below. On tonight’s episode the all-star clothiers spin out flashy party dresses inspired by their personal relationships. Appearing: Nina Garcia.

On the last episode, with exclusive access to the Broadway musical, ‘Wicked,’ the designers competed to create couture inspired fashion. What a treat for Project Runway fans!  Michael Costello,  Justin LeBlanc and Mondo Guerra presented their latest collections. Did you watch the last episode? If you missed it, we have a full and detailed recap right here for you.

On tonight’s episode as per the Lifetime synopsis, “the designers must create colorful party dresses inspired by their personal relationships.”

Tonight’s episode of Project Runway Allstars begins with the designers arriving at the Marie Claire’s headquarters where Nina and Alyssa Milano are waiting for them.  They announce that this week’s theme is “past, present, and future.”  Nina reveals that this week they will be creating a colorful party dress that represents their past, present, and future, and they only have a budget of $100.  The winner of this week’s challenge will win a $15,000 pendant from Zale’s Jewelry Store and a $10,000 gift card.

The allstars begin sketching their designs and then they head to the fabric store.  Dmitry decides to be brave and settles for a vinyl material.  Benjamin notices all of the other designers are choosing reds and pinks, so he decides to think outside of the box and selects a gold fabric.

Once they have their fabric they head back to the workroom and get started.  Kate begins working on a “sexy baby-doll dress.”  Sonjia looks around and realizes that almost everyone is using red or pink.  Her fabric is a dark red, but it stands out a little because it is a lacy print.  Gunnar is rehashing his past love life as he works on his dress and he brinks down in tears, he confesses that he is “newly single” and he hopes that this competition will help him get some closure.

The designer’s mentor Zanna Roberts Rossi arrives to critique what they have done so far.  Zanna tells Gunnar that he needs to spice his dress up a bit, to make his red dress stand out from the others.  Benjamin is working on a spider web on the back of his dress, and Zanna is a fan.  Zanna is not a fan of Sanjia’s red lacey dress.  She says that it is too “mother of the bride” and she needs to spice it up.   Zanna informs Dmitry that his dress looks “too cheap.”  Kate’s dress is dubbed a “snoozefest.”  Michelle reveals that she has already been married, divorced, and is engaged again – and her dress is inspired by her love life.  Before Zanna leaves she warns the designers that she isn’t seeing enough of their personal journeys in their dresses.

After Zanna leaves the models arrive for their first fittings.  Once Kate gets her baby-doll dress on her model she can tell that her model “doesn’t feel sexy enough” so she plans on going back to the drawing board and scrapping the dress that Zanna said looked like a maternity dress.  There is only an hour left – and Kate begins panicking and patterning her dress and banging it out on the sewing machine. Time is up, and the designers have to head home.
[10:02:06 PM] Amanda Austin: The next day the designers head back to the design room to finish up their dresses.  Fabio hits the accessory wall to pick out shoes and a clutch for his model.  The designers head to the studio to pick out their models hair and make-up, the all-stars finish dressing their models just in the nick of time.  It’s time for this week’s runway show.

Alyssa Milano takes the runway and introduces this week’s judges: Nina Garcia, Isaac Mizraahi, Danielle Bernstein, and Seth Aaron Henderson.  Everyone takes their seats and the models begin parading down the runway in the designer’s “past, present, and future” party dresses. After the show Alyssa announces that Zales was so impressed with their designs – they are giving $1000 gift cards to everyone, on top of the grand prize.

Alyssa announces that Michelle, Justin, Sam, Jay, and Fabio are safe and excuses them from the runway.  Sonjia is up first – she explains the meaning behind the red lace dress.  The judges rave about the dress, it’s a hit with Nina and Isaac.  Alyssa gushes that it “rocks her world.”  Gunnar’s dress is not  hit with the judges though, they tells him that it is a mess and chaotic.  Nina loves the fabric that Benjamin used, but the judges think his dress is too “costumey.”  The judges rave about Helen’s dress, and Alyssa dubs it “tragically romantic.”  The judges aren’t happy that Kate used such a neutral color, and don’t like her hem, or lack of.  Isaac says that Dmitry’s dress looks like it belongs on Real Housewives.

After deliberating the judges are ready to announce this week’s winner.  Alyssa says that Dmitry and Sonjia are safe, and Helen is the winner.  Benjamin and Gunnar are in the bottom three, but they are safe.  Kate is officially eliminated from Project Runway All Stars.