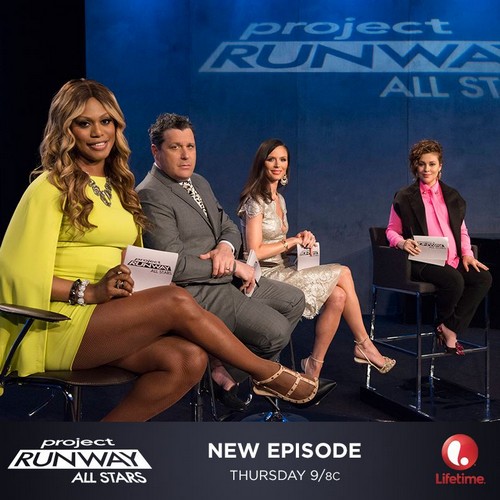 Tonight on Lifetime Emmy Award winning Tim Gunn’s Project Runway All Stars 2014 continues with an all new Thursday December 18, season 4 episode 7 called “Mix and Math.com” and we have your weekly recap below. On tonight’s episode, the clothiers fashion looks for dating-site singles. Guest judge: Laverne Cox (“Orange Is the New Black”).

On the last episode, the stakes were high as the designers rolled the dice on the runway for a fashion gamble. Did you watch the last episode? If you missed it, we have a full and detailed recap right here for you.

On tonight’s episode as per the Lifetime synopsis, “The designers must create looks for Match.com singles to wear on first dates.”

Alyssa Milano might have just scared the contestants of Project Runway All Stars likes no one else could have. On tonight’s all new episode, the first thing our favorite lovable host told her designers was that they were going to be paired off and the designers were not told to be why until after teams were made. Which to be honesty was completely unfair. Because Sonjia had ended up picking teams that for all intents and purposes look like they’re going to fail with this week’s challenge.

The designers are acting this week in accordance with Match.com. They’ll be dressing both men and women (so none of their usual models) for their special first dates they’ve made through the website. And the problem our designers seem to be having with this – is that some of them simply can’t make clothes for men.

Michelle is talented. After all she had to be to make it so far in the competition but for some reason she’s doubting herself on this week’s challenge. The prospect of dressing a man is tripping her up and she rather blame her failings on the lack of help she’s getting from her partner Samantha than push through. Apparently she says she doesn’t feel well and so that made her expect Sam to want to help yet Michelle’s partner is looking at their situation in terms of the competition – if Michelle does mess up then it can’t affect her own work.

That’s Sam’s mentality! Meanwhile, everyone else is getting a hand up. The designers are critiquing each other and saying what works. And Sam had talked to Sonjia to see what works.

So in all fairness, Michelle did have a right to feel like she was being sabotaged but in the end she still pulled off a pretty impressive outfit. She made some modern slacks and she gave her guy a comfortable cashmere cardigan. Both of which he loved and later his date appreciated (sidenote: cashmere is super soft and the perfect thing to wear when you’re giving a hug!).

In fact, all the designers did a pretty good job in picking out designs for their singles. They knew they would be dealing with real people that needed to feel both fashionable and particularly comfortable and for the most part they pulled that part off. However Justin did receive one criticism from the guy he dressed. He was told the shirt was just a tad too small – it felt tight across his chest and it restricted his movement.

After they had their dates, the singles came back to walk the runway. They put on their specially crafted date wear and had their makeup professionally done to match. So when they hit that stage – each of them were truly shown off to their best advantage.

Though oddly the judges’ comments weren’t as cutting as Michelle. It seems she kept quiet about a lot of the designs she saw and during her confessional – she basically called most of what she saw crap.

The first couple that was up was Helen and Craig. They were designed by Dmitry and Sonjia. Sonjia went with the perfect color for her first-dater but she didn’t apply the cut out to her designer dress the right way. Hence she lost points for that. Dmitry on the other hand received mostly praise.

The second couple were dressed by Samantha and Michelle. And both women got a lot of flak. Michelle for putting her first-dater in cashmere that in no way at all looked like cashmere and the pants she designed were just as lackluster. As for Sam, she did the worst thing she could possible do. She covered a woman’s but and chest. Both which of which that should have been on show on the first date.

Yet that didn’t compare to what Justin and Helen did with the third couple. Justin’s outfit was Banana Republic and Helen’s design was merely a hot mess. She put her first-dater in a dress that made her look pregnant.

And as for the last couple that was designed Jay and Fabio, it seems they actually got off lucky. Jay and Fabio designed two of the best outfits of the night. They dressed two men and the men instantly hit it off even as they wore clothes that matched the other ones’ personality. So the risk Jay and Fabio made did pay off.

Fabio later won tonight’s challenge and prize. Meaning he’s won an all-expense paid date from Match.com but the real shocker came when the judges told Helen and Justin that for tonight, just for tonight, they were safe.

Those two designers had tried to create outfits that matched the first-daters and in doing so they sorely disappointed the judges. But they’ve been allowed to stay so hopefully they’ll turn things around next week!