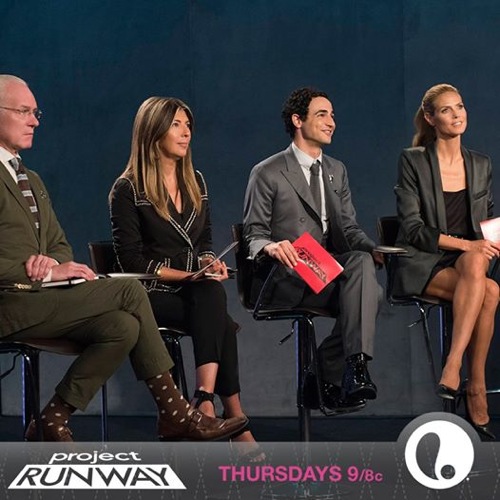 Tonight on Lifetime Emmy Award winning Tim Gunn’s Project Runway 2014 continues with an all new Thursday October 16, season 13 episode 13 called, “Finale, Part 1.” On tonight’s episode In part 1 of the two-part season 13 finale, the designers head to Rome with Tim Gunn for inspiration and to shop for fabric.

On last week’s episode the competition heated up when a challenge determined which contestants would go to Fashion Week. Included: Eliminated designers return to the workroom.  Did you watch the last episode? If you missed it, we have a full and detailed recap right here for you.

On tonight’s episode Tim Gunn and the designers travel to Rome for inspiration and fabric shopping before heading home.

Tonight’s episode is going to be another drama packed one, which you won’t want to miss. So be sure to tune in for our live coverage of Lifetime′s Project Runway season 13 episode 13 at 9PM EST! While you wait for our recap, hit the comments and let us know how excited you are about this new episode of Project Runway tonight.

Tonight’s episode of Project Runway begins with the final four meeting with Heidi Klum. She reveals that they have a budget of $9,000 to create a ten look collection over the course of the next five weeks, the winning collection will be shown at New York Fashion Week. Tim has a surprise for the Kini, Sean, Amanda, and Char. They are going on an all-expense paid trip to Rome, Italy so they can find inspiration for their Fashion Week collection.

The final four arrive in Italy and Tim Gunn takes them to the coliseum and the exact location where Julius Caesar and Brutus fought. Afterwards they hit up the pentathlon and a few churches. The designers begin sketching during their tour and are feeling inspired by the Italian architecture.

Afterwards, Tim and the designers head out to lunch. Sean confesses that he has no idea where he is going to work on his Fashion Week outfits because he doesn’t even own a sewing machine. Tom points out to Char that she hasn’t won a single competition the entire season, she admits that she just feels grateful to have made it so far. After lunch the designers head to the park to start sketching, Tim Gunn meets with each of them and gives them a little pep talk and encourages them to stay true to themselves and make sure their pieces are in harmony with each other.

Before heading home, Tim Gunn takes the designers to a high-end fabric store called Valli to shop around. They aren’t obligated to buy any fabric at the store. Tim just want to give them an opportunity to use Italian fabric on their designs and get inspired. The designers are shocked at how expensive the fabrics are. Kini and Sean opt not to purchase any, and Amanda and Char spend almost $1000.00 on fabric.

Now, it’s time for Tim Gunn to visit the designers at their homes to check on their progress on their Fashion Week collections. First, he pays Kini a visit. He confesses to Tim that he had serious designer’s block when he first got home from Italy. But, he does have some looks put together now. He has decided to do a “Park Avenue Princess Visiting Italy” theme. After checking in on his designs, Kini takes Tim out back to introduce him to his family. Kini’s mom gushes about how proud they are of him, and that’s why they named him “Kini” which translates to the “King of The Morning Star.” Kini’s family decides to throw Tim an authentic Hawaiian luau while he is visiting.

Next Tim travels to Detroit to check in on Char. Char meets Tim at the park and introduces him to her step-mom, grandfather, and brother. Afterwards Char takes Tim to her house to look at her designs so far. She reveals that she doesn’t have any sketches, she decided to go all free-hand. In Italy Char learned that a little bit goes a long way. Tim reminds her that she has to make sure that the pieces are cohesive and are all part of one collection.

After leaving Detroit, Tim heads to Amanda’s Nashville. He is surprised when he sees that nothing is finished. Amanda might be in over her head, she is even planning on screenprinting. He tells her to reign it in a little bit, he tells her to rake out all of the extra stuff, like the fringe. After checking out her designs so far, Tim sits down with Amanda and her husband Will and discusses how far Amanda has come since the last time she was on the show during Season 11.

Tim arrives in NY to check in on Sean at his new studio to critique his work so far. Sean and Tim head down to the water front and Sean fills him in on his life in New Zealand and how he learned to sew with newspapers. They head to Sean’s studio, and Sean reveals that his collection is based on the fall of Julius Caesar. Sean is concerned though because he is using fringe, and he is afraid the judges are tired of it. Tim is concerned though, he doesn’t think that they are cohesive enough and don’t go well together.

After working on their Fashion Week collections for a few weeks at home, the final four designers head back to New York with all of their progress. They arrive at their workroom and begin unpacking the outfits that they have put together. They begin scoping out the competition, and Sean thinks that his only competition is Amanda. Kini thinks that Char’s collection is a mess and she isn’t even on the same level as them.

Tim Gunn arrives at the work room and tells them that they have a few hours to work, and then they will have to head to their Mary Kay consultation to pick out their models hair and make-up. The majority of Kini’s outfits are denim, so he wants his models to have bold cat eyes to offset his designs. Amanda’s collection is kind of 70’s theme, so she picks out an orangey pallet for her model’s make-up. Back in the design room, Kini’s outfits are done, Char and Amanda have the most amount of work to do.

Tim shows up at the workroom and announces that the judges would like to see a sneak peek of their collections before the Fashion Week show. They will each have to show off three outfits on the runway today, and they have two hours to prepare them. Their models arrive to be fitted, and they get their hair and make-up done, they head down to the runway with the designers.

No one is getting eliminated today, but the judges would like a chance to give the designer’s feedback before NY Fashion Week. After the models parade down the runway in their final designs, the judges meet with the designers to discuss their collections. Sean meets with the judges first, Heidi likes what he has done and says that it looks “fresh and modern.” They tell him that he shouldn’t change a thing and has put together a great collection.

Char shares her designs with the judges next, and says that she wanted it to be a “breath of fresh air.” Heidi is concerned because none of them tie in with each other. Her striped jumper is a hit with the judges, but they want to see more of her personal style in her designs. The judges love that Amanda designed her own jewelry, but they think that she needs to lay off the Bohemian style a little and elevate her clothes to another level. Kini’s structured denim looks don’t go over well with the judges. Heidi tells him to restyle his collection completely, and is afraid that they look like something an old lady would wear.

After their critiques the designers head back to the work room. Kini is overwhelmed, and confesses that deep down inside he is freaking out about redo-ing his entire collection. The other designers comfort him, Sean is shocked at how critical the judges are being. It is insane to tell someone to redo an entire collection in 24 hours.