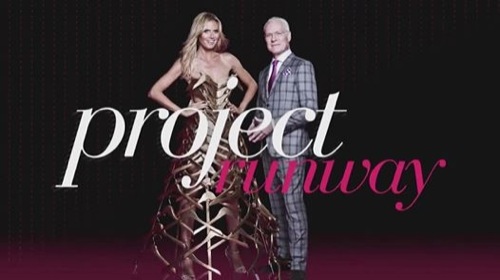 On last week’s episode Tim Gunn and the designers traveled to Rome for inspiration and fabric shopping before heading home. Did you watch the last episode? If you missed it, we have a full and detailed recap right here for you.

On tonight’s episode the finalists prepare to present their collections at New York Fashion Week; the winner is chosen.

Tonight’s episode is going to be another drama packed one, which you won’t want to miss. So be sure to tune in for our live coverage of Lifetime′s Project Runway season 13 episode 14 at 9PM EST! While you wait for our recap, hit the comments and let us know how excited you are about this new episode of Project Runway tonight.

Tonight’s episode begins now – Refresh Page often to get the most current updates! Spoilers Below!

Tonight’s episode of Project Runway will tell us who wins and kicks off with the final four regrouping after the judges’ feedback on their New York Fashion Week collections. Kini is discouraged because the judges told him he has to redo all ten of his outfits. Tim Gunn surprises the designers and tells them he is going to take them to Mood fabric store and they all have a budget of $300. Amanda opts to stay behind in the workroom and skip going to the fabric store, she doesn’t need any more supplies.

They return to the work room, and Kini is feeling a lot more confident. He decide to scrap his one coat, and he knows he can sew fast, so he isn’t as stressed as before. Char gets to work on a sweatshirt that says “Fly” on the front of it. Amanda encourages her and says it is a good idea, but it is clear that Kini and Sean think it is a horrible idea.

Tim Gunn arrives to check in on the final four designers. He stops at Amanda’s station, and she is thinking about redo-ing multiple outfits. Tim reassures her that her designs are fine and now she is overthinking everything. Tim is impressed with Kini’s progress, and reassures him that he is making his collection look much more youthful, just like the judges told him to do.

Amanda sneaks peek at the other designers, she thinks that Sean is her biggest competition. Their runway show is in two days, and Char has to redo four outfits. She shows Tim her new fabric and says she is going to do a full skirt out of it, he is not a fan of the pattern she has selected and says that it is “too old.”

The models arrive for their fittings, Char tells her model to go have a seat in the corner, because she isn’t ready to even put her clothes on a model. Kini is astonished at hoe he was able to revamp his collection. After their fittings the designers head back to their rooms for the night.

Their runway show is tomorrow – the designers head back to their workroom for their final day of work. Tim tells them they only have until 5:00 PM to put the finishing touches on their designs, and they have to head to the make-up studio to pick out their model’s looks for tomorrow. Tim sends them back to their rooms early and tells them to get some rest because they will be waking up at the crack of dawn and heading to NY Fashion Week with their collections.

The next morning, Kini, Amanda, Char, and Sean head to NY Fashion Week before the sun is even up. They get to work backstage prepping their models. Char ran out of time, so she decided to put the turquoise dress back in to her collection the Tim told her to scrap. Tim tells her to do whatever she wants to do because it is her show. It’s time for the show, the designers line up their models backstage, and the audience is full of hundreds of people. Amanda happens to glance down and notices that one of her models just decided to change her shoes. Everyone in her collection has the exact same pair of shoes on, except for the model that decided to put on a different pair.

While Amanda gets the shoe debacle straightened out, Heidi Klum takes the runway and kicks off the show, introducing the judges and guest judge actress Amy Rossum. Amanda’s collection is up first, she heads out on the runway and introduces herself and then the models parade out in the ten outfits that she created. Amanda and Tim Gunn Watch from backstage and are both happy with the show.

Up next is Char, she races around to put some finishing touches on her models and then heads out on the runway to introduce herself. After’s Char’s show, Kini and Alex follow while the judges sit in the audience taking in the collections and making notes.

After the runway show, the final four line up for the judge’s critiques. Char’s collection gets mixed opinions, they are impressed with the fact that her clothes can be worn by every-day women. The judges are huge fans of Amanda’s custom jewelry, and they think she is ready for the next level of major designing. Heidi was skeptical about the cutout dress in her collection though. Sean’s collection is dubbed “fabulous” and “sophisticated.” Heidi didn’t like the dress over the pants look though and thought that it was messy. The judges think that Kini is gifted and are amazed at how quickly he was able to redo his collection. They love the fact that he could take denim and make it look so sophisticated, They do think that his final dress was a little much though, and a “little too drag queen.”

Heidi asks Char what it would mean for her to win Project Runway. She thinks that winning would be a good reward for herself after all of the hard work and effort that she has put in to this season. Amanda gushes that she really wants to be in Marie Clare, and wants to build her own brand, winning Project Runway would help her get there. Sean says that winning Project Runway would be able to make all the things and ideas he has inside of him a reality. Kini confesses that it would be “more than the world” for him to win this season. The judges excuse the final four so that they can discuss who they think should win this season of Project Runway.

After some serious deliberation the judges call the judges back to the runway so they can announce this season’s winner. Kini, Sean, Amanda, and Char line up on the runway. Heidi announces that Char and Kini are out, the final two are officially Sean and Amanda.

Heidi reveals that Amanda is the runner up, and Sean is the winner of Season 13 of Project Runway.