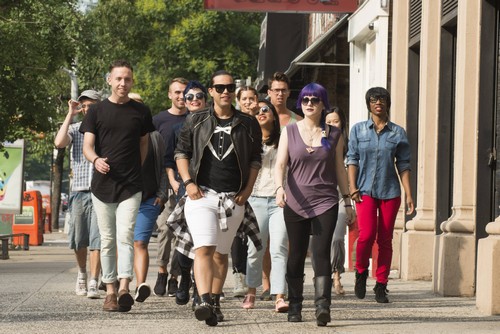 On the last episode the designers found out that there’s more to the audition then they knew, turns out that there was another part of the audition that they didn’t know about; they had to pass this other audition in order to get on the show. Angela escaped elimination leaving Mitchell and Jefferson vying for the last spot. She vowed to work harder and not get so nervous. Mitchell was saved while Jefferson got those 2 German words no Project Runway contestant wants to hear. “Auf Wiedersehen!”. Did you watch the last episode? If you missed it we have a full and detailed recap, right here for you.

On tonight’s episode the designers visit a local movie theater, then must produce a fashionable look from unconventional materials found in the theater and on a movie set. Fashion blogger Garance Dore is the guest

Tonight’s episode is going to be another drama packed one, which you won’t want to miss. So be sure to tune in for our live coverage of Lifetime′s Project Runway premiere at 9PM EST! While you wait for our recap, hit the comments and let us know how excited you are about the new episode of Project Runway tonight.

Tonight on Project Runway an afternoon at the movie theatre becomes a challenge where the designers  must create fashionable looks out of items found in a theatre or film set.

Tonight’s episode begins in the apartment where the designers are fast asleep. They awaken to popcorn on the kitchen counter and a message saying they are going to a morning matinee. The designers immediately begin to speculate on their next challenge. All the talk about the next challenge only reminds them of their last challenge and the designers are all baffled about how Sandhya won. There’s no time to spend on worrying about it because they must quickly get to the movie theatre. Once they are in the theatre the screen begins to show a trailer when out of nowhere Tim Gunn pops up on the screen to give the designers the details on their next challenge. Tim Gunn tells the designers their next challenge is all about the movies and they will be asked to incorporate their movie experience into their fashion designs in an unconventional challenge. Carrie is excited about unconventional while some of the designers are not. Tim Gunn explains they will have access to everything involved in movies which include costumes, movie theatre concession items and drapes. Of course it wouldn’t be an unconventional challenge without a twist. Tim Gunn points out that they are all sitting in groups of 3 which represents the groups they must work in for the challenge. The designers must create a cohesive collection of 3 pieces which makes some designers happy and puts others on edge. Hernan, Carrie and Sandhya make up the red team which Samantha seems to think is the worst team possible. Carrie is worried about working with Sandhya since she has immunity from the last challenge.

Tim Gunn yells action and the designers race toward the props. Once time is up they head to the work room to make since of all the stuff they grabbed and to coordinate with their group members. Tim Gunn says for this challenge there will be one winning team and one designer who wins from that team and a losing team and one designer who will be eliminated from that group. Left with that news the designers begin working together to come up with a group collection. The silver group agrees to stay away from actual fabric and to make their own in order to wow the judges. Red Team Sandhya, Carrie and Hernan agree to work separate and then bring it together at the end instead of forcing the collection. The Green team goes with a high fashion and avant grade theme. The purple team meshes all their styles together and goes with cocktail dresses in a blue tint. The blue team agrees on playing on the villain teem but nervous Angela isn’t feeling it and wants to represent the good guy. of course she gets really nervous and begins to cry.

The red team’s strategy seems to be working for them and they are moving along pretty smoothly. Sandhya decides to use numbers and letters on her look but Carrie doesn’t like it because she and Hernan are not using numbers. Carrie feels that Sandhya is doing what she wants because he has immunity. Hernan agrees and feels that the judges are really going to point it out that one person strayed instead of making it cohesive.

Tim Gunn comes in to check in with the teams but everyone greets him in silence and stressful looks. He goes around to each group and gives pointers and tips to steer the teams in the right direction in Tim Gunn Fashion. Tim Gunn tell Angela he doesn’t like her flower design and tells the red team that their designs are all over the place.

The designers continue to work on their collections and the silver team show Tim their designs which he like s but thinks their ideas are bit ambitious and may not be able to be completed in the allotted time. He tells all the groups that their models will be in soon and that they will have tip 10:30pm to finish. The red team tried to get their collection to work and Hernan gets frustrated with Sandhya and tells her that the way she’s going is not working. She best upset and walks away because she feels like they aren’t respecting her voice. Sandhya ends up in tears and Mitchell comforts her. Sandhya ends up talking to Tim to get advice and tells him that she is being picked on. Tim Gunn tells her that she is a strong designer who could win the whole season which gives Sandhya just what she needs to go back to the workroom and tackle the challenge head on.

The designers start to see that Angela is also struggling with her design and that she still only has just a form and not an actual design. The models come in and the designer begin to fit the designs to heir bodies. Angela struggle since she doesn’t have much to go on and the little bit she does have doesn’t fit the model. Meanwhile the silver team fits their models but haven’t contoured their designs to fit the models with leaves a lot of body parts hang in out. There’s no time to fix it because it’s time for the designers to head back to the apartment.

The next day the designers head back to the workroom and the red team goes in feeling refreshed and ready to work together. Tim Gunn greets the group and tells them they have 2 hours to fit their models and send them to the hair and makeup studio. He compliments the designers on their collections and puts them to work. The blue team pulls together to help Angela finish her design but she refuses their help. The models come in and the designers begin to dress them and coordinate hair and makeup. As time runs down Angela is scrambling to finish and the silver team struggles to put their barbarella collection together which leaves the other designers confused. The red team follows Hernan’s lead and brings it a lll together as one cohesive collection. Time runs out and the judges must wrap it up and put their designs on the runway.

Before the show begin Heidi introduces the judges which consists of herself, Nina Garcia, Zac Posen and guest judge top fashion blogger Garance Dore. She explains that Tim Gunn will not be judging but has one save for the season that allows him to bring back one designer who has been eliminated if he disagrees.

The models walk the runway and the show wraps. Before the judging begins Heidi points out that the judges loved Shawn and    looks but didn’t like Angela’s which brought the whole team down. She points out that if Angela’s had been up to snuff they would’ve won. Their team ends up being safe but Angela is feeling horrible after that feedback from Heidi.

Heidi then excuses all that are safe leaving 2 teams on the runway; the red team and the silver team. Heidi explains that they represent the team that won and the team that lost. The silver team is the winning team which leaves the red team as the losing scores.  The judges love the silver team’s collection and says theirs was the most original with designs that were different yet cohesive. Nina says the most exciting part was the color and that each dress had different shapes for different bodies. They congratulate the girls and send them off the runway and turn to the losing team.

The judges weren’t thrilled that the red team designed 3 dresses that looked the same. Zac posen says the pieces are rough and Heidi points out they all look like girls in a music video. Carrie and Hernan blame Tim Gunn for coming in and saying they need to be more cohesive. Nina says Sandyha’s is the worst and that she’s lucky to have immunity. Hernan begins to cry and so does Sandhya. The judges ask them who they think should go home and Sandya says none but Carrie doesn’t hesitate to throw Sandhya under the bus basically saying she should go home. Hernan says Angela from the other team should go home and Nina says it really doesn’t matter because they have made their decision. Sandhya is stunned that they would both stoop to that level. They send the losing team off the runway so they can deliberate. They aren’t too keen on the way Carrie immaturely defended the designs when they were clearly all the same. They make their decision and bring the winning and losing team back to the runway.

They congratulate veteran Amanda as the winner of the challenge which also gives her immunity for the next challenge. Sandhya is excused from the runway because she has immunity from the last challenge. Carrie is sent home and Hernan is allowed to stay. Carrie thanks the judges for the experience and says they made the wrong choice. She calls out Sandhya in front of all the designers and says she is the one who should be going home but isn’t because of immunity which is unfair.