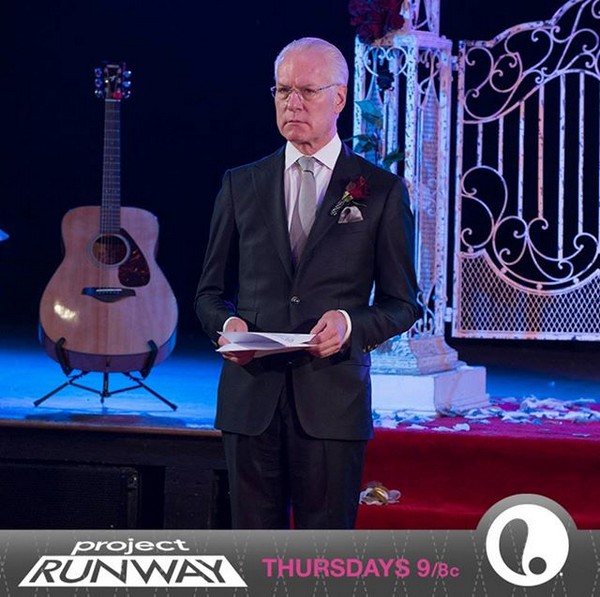 Tonight on Lifetime Emmy Award winning Tim Gunn returns with a new episode for season 13 of PROJECT RUNWAY. On tonight’s episode called, “It’s a Nice Day for a Rock Wedding,” the designers must impress the judges by creating unconventional wedding dresses.

On the last episode the designers had to create looks for Heidi Klum to wear at the Creative Arts Emmy Awards. Sean was the winner of the challenge and Heidi decided to wear his design. Mitchel and Kristine were officially eliminated from Project Runway. Did you watch the last episode? If you missed it we have a full and detailed recap, right here for you.

Tonight’s episode is going to be another drama packed one, which you won’t want to miss. So be sure to tune in for our live coverage of Lifetime′s Project Runway season 13 episode 6 at 9PM EST! While you wait for our recap, hit the comments and let us know how excited you are about the new episode of Project Runway tonight.

Tonight’s episode of Project Runway begins with the designers preparing to head to the Webster Music Hall to learn what their next challenge is. There is a lot of tension because out of the clear blue Korina informed Amanda that she was a “phony designer.”

When the designers arrive at the Music Hall, they are shocked when Tim Gunn arrives with Dita Von Teese on his arm. He announces that their next challenge is the “Wedding Challenge,” they will have to create a unique unconventional wedding dress, and a corresponding dress for their bride to wear to the reception. Since they have to make two dresses, they will be working in teams of two today. Tim Gunn draws names to determine who will be working with who. The teams are as follows: Fade & Emily, Alexander & Samantha, Kini & Sean, Sandyha & Char, Amanda & Korina.

The designers hit their sketchbooks and start brainstorming dresses. Char and Sandyha decide to go with a rockstar wedding dress, with yellow leather. Fade and Emily are discussing working with denim. Amanda and Korina are off to a bumpy start because Korina wants to make a bride suit instead of a wedding dress. Kini and Sean are exploring dresses with tuxedo tops. They head to Mood and each spend $400 on their fabric for their dresses.

Back at the work room the designers get started on their unconventional wedding dresses. The other designers are all shocked by the hideous yellow leather Char and Sandyha are pinning on to their mannequin. And, Fade and Emily appear to be working with peach and black, which is apparently a big nono. Kini is confident that his and Sean’s dress is the winner. Korina is feeling like she is on top of the world, but her partner Amanda is still furious about being called a “phony” earlier. Amanda heads to the breakroom and vents to fade about Korina and Char ganging up on her earlier.

Tim Gunn arrives to check in on the teams. Alexander and Samantha are under the microscope first, Tim isn’t sure about the appliques they are attaching to the front of the lace dress. Tim says that the top Char is working on “is a mess.” And, he says they chose a tough color. Tim like Fade and Emily’s dresses, but he is concerned because they are nothing alike and doesn’t look like something that the same woman would wear.

Tim pays Kini and Sean a visit, their reception dress is a mock tuxedo and Tim gives them the idea to add a cummerbund. Tim says good-bye to the designers and says that their models will be in at 11:00. Amanda and Korina are still bickering about their designs. Korina is dead set on creating a suit, so Amanda is not helping her, she knows the judges aren’t going to like it so she doesn’t want to be a part of it. The models arrive and the designers begin fitting them. Everyone is shocked by how loud and yellow Sandyha and Char’s dresses are. Char is beginning to panic because it is not looking the way she expected.

Back at the designer’s rooms there is a ton of drama, Korina vents to Char about how Amanda is the judges’ “Golden Child” and she knows if it comes down to the two of them they are going to send her home instead of Amanda. Meanwhile in the other room Fade and Amanda are gossiping about Korina and her negative attitude.

The designers head to the work room the next morning to add the final touches to their outfits. Amanda is stressed because Korina is still working on the jacket and hasn’t even started the pants, since she is done with her dress she decides to do the pants for Korina since she knows they aren’t going to get done. The designers head to the make-up studio to pick out their model’s hair and make-up. Samantha wants her model’s hair flattened with volume on the back. Emily is trying to figure out what to do with her model’s hair since she is going to be wearing a gothic black veil. Meanwhile back in the design room Alexander is trying not to laugh at Sandyha’s wedding dress, he says it looks like a “corn cob after you eat the corn off it.” Korina and Amanda’s model arrives and the pants that Amanda made are too small for her. They try to stitch her in, but then the zipper rips in the back. Kini’s dress is officially done, and Samantha thinks it is amazing. It’s time for the designers and models to head down to the runway.

The designers and judges and guest judge Dita Von Teese take their seats, and the models hit the runway. After the runway show Heidi takes the catwalk and announces that Amanda and Korina are safe this week and they can leave the runway. Amanda and Korina are shocked and head to the back room. Four teams remain, one member from the winning team will be the winner of the competition, and one member form the losing team will be going home.

First the judges tackle Fade and Emily’s dresses. Heidi likes both looks a lot, but Dita von Teese is not impressed with the gothic wedding dress. She says that it is “laughable and cliché.” The judges are impressed with Fade’s painting on the fabric of his dress. Kini and Sean explain to the judges that they designed their dresses for a woman that is more comfortable in business attire. The judges rave about their designs, but are a little skeptical about the bunch of fabric on the side of Kini’s dress. The judges are appalled by Char and Sandyha’s dresses, Heidi announces that they are an “epic fail.” And the judges joke that the two models look like Big Bird and Tweety. The judges think that Samantha and Alexander’s dresses are “over embellished.” They think it looks like an 80’s dress, and is cheap and cliché, and lacking originality.

The judges head backstage to take closer looks at the dresses on the models. The judges are horrified once they get closer looks at Char and Sandyha’s dresses. They pull up Char’s dress and realize she literally just pinned scraps together, and up close they realize that Samantha and Alexander’s dress is made of beautiful lace but they ruined it with the appliques. The judges bicker over whether Sean or Kini should be a winner today. Sean won last week, and Kini has never won, Heidi argues that Kini deserves a win.

The judges bring the designers back to the runway. Heidi announces that Sean and Kini are the winning team, and Sean is the winner of the challenge. Emily, Fade, Alexander, and Samantha are safe this week and are told to leave the runway. Sandyha and Char are the losing team this week. Char is officially eliminated from Project Runway.