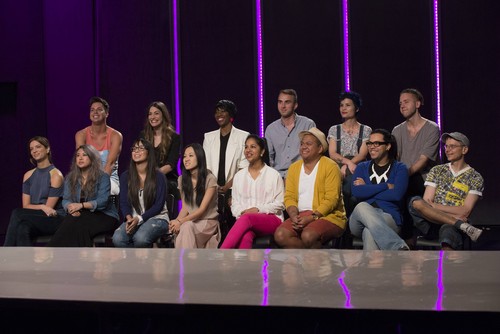 On the last episode the designers visited a local movie theater, then they had to produce a fashionable look from unconventional materials found in the theater and on a movie set. Fashion blogger Garance Dore was the guest. Did you watch the last episode? If you missed it we have a full and detailed recap, right here for you.

On tonight’s episode Designers must use “Marie Claire” magazines from 20 years ago as their inspiration, the designers then must create looks that are futuristic.

Tonight’s episode is going to be another drama packed one, which you won’t want to miss. So be sure to tune in for our live coverage of Lifetime′s Project Runway premiere at 9PM EST! While you wait for our recap, hit the comments and let us know how excited you are about the new episode of Project Runway tonight.

On tonight’s episode of Project Runway “Welcome to the Future” designers must use “Marie Claire” magazines from 20 years ago as their inspiration to create looks they think will be relevant 20 years in the future.

Tonight’s episode starts with some of the designers talking about how Sandhaya should of went home. Angela cries because she’s not doing well in the competition. There’s not much time to talk because it’s time to meet Tim Gunn for their next challenge. Tim Gunn meets them on the runway with the editor-in-chief of Marie Claire magazine. She tells them the magazine is celebrating their 20 year anniversary and that the magazine started in 1994. Tim asks her if she remembers what she was wearing back then and then reveals their next challenge which is using clothes from the past to design for the future. For this challenge the designers get to go to the fabric store to choose fabrics for their look. But first they had to the workroom to sketch out there designs. Once they finish sketching they head to Mood to pick out their fabrics. Each designer runs through the store trying to find fabric they think will work for the future. Tim reminds them they don’t have much time and the designers are feeling the crunch.

Time is up and the designers head back to the workroom only to find pictures of each designer from 1994 posted on the wall. Needless to say all the designers are super embarrassed but thrilled to go down memory Lane. Everyone loves Emily’s sexy picture who was 21 at the time. All the designers decide to go with a dark look except Sandhaya and Mitchell who decides to go with something fun.

Meanwhile certain cliques are starting to form in the workroom leaving designers like Sandhaya feeling left out. Tim comes in to check on the designers. He worries that Angela isn’t doing enough for her look which only feeds her anxiety. Tim also worries about Mitchell’s look who has a lot of fabric combinations and a skirt that looks like a tutu. He suggests that he makes it a little more sophisticated. Kristine uses the movie Clueless as inspiration for her look. Sandhaya wants to integrate safety pins into her look and Mitchell is confused and so is Tim. He tells her it’s too gimmicky and to tone it down.

Tim checks in with veteran Amanda who tells him she’s going with efficient clothing. Clothing that’s all in one and interchangeable. Char does a different twist of the pantsuit and says 20 years from now women will be breaking rules in fashion. Alexander struggles with making his one piece and Tim suggests he make it a two-piece.

Three hours before the end of the day the models come in and it’s time for the first fitting. Alexander is really struggling because his outfit is puckering on the model and the top makes it look like she has a union-boob. Meanwhile Sandhaya is feeling super confident when she fits her model. Hernan’s look isn’t quite working and he’s having a hard time covering up his model. Angela is feeling less nervous when she fits her model and starts feeling confident although the other designers feel her look is boring. Alexander scraps the uni-boob top at the last minute and starts over.

It’s the next day and the designers rush in to finish their looks. Tim comes in to tell them they only have two hours to fit their models, accessorize and get hair and makeup done. Alexander is feeling the pressure because he had to start all over and Amanda is worried. Angela is running around like a chicken with its head cut off and the other designers are annoyed with her always looking frantic. As usual everyone’s confused by Sandaya’s look. Tim gives the 10 minute call and the designers put last minute touches on their looks.

Time is up and Tim announces that it’s time to take the future to the runway. Heidi greets them on the runway and introduces the judges Zac Posen, Nina Garcia, editor-in-chief of Marie Claire and the guest judge tv host Amanda De Cadenet. She also introduces Tim Gunn who has the ability to save a designer who is been eliminated. The show starts and the models walk the runway.

[10:30:36 PM] SERENA SPATES: The show ends and Heidi calls all the designers forward who are safe and excuses them from the runway. But before they leave she tells Amanda she’s lucky to have immunity because her design was awful. There are six designers left on the runway which include the three who have the highest scores and the three with the lowest. Heidi then brings out their models and starts with Angela. The judges aren’t impressed with her modern take on the suit and feel that her design is sloppy. Next they look at Sandhaya’s design. Contrary to what all the other designers thought the judges love her look and love that she took a risk. Zac Posen tells her that her heritage is working for her and her designs. They also love Emily’s Ewok design.

They aren’t so impressed with Alexander’s look and Heidi tells him it looks like an old rug and Zac Posen adds that it looks like maternity wear. Next they judge Kristine who they feel nailed the competition. On the other hand they were disappointed with Sean’s look. Heidi tells him to step it up. Heidi then excuses all six designers from the runway so the judges can deliberate. Meanwhile in the back Angela it’s freaking out and crying because she’s having such a hard time.

After deliberating the judges bring the designers back to the runway for the final results. Heidi tells them one designer will be named the winner and one designer will be out. Emily is safe and Kristine are safe and in the top. Sandhaya is announced as the winner again and has immunity for the next challenge. Sean, Alexander and Angela are in the bottom. Alexander is in and Angela is out. Angela is shocked and of course she cries the other designers hug her and they say their goodbyes.