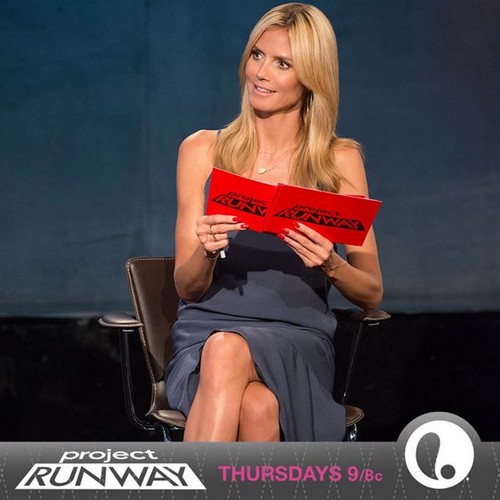 On last week’s episode the designers create avant-garde styles that must stand up to the elements, particularly rain.  The guest judge for the episode was Caitlin Fitzgerald and the winners of the episode were Sean & Kini.  Eliminated from the competition was Fäde.  More happened.  Did you watch last week’s episode?  If you missed it we have a full and detailed recap, right here for you.

On tonight’s episode it is an American Girl-inspired “Project Runway” the designers must use the dolls historical period dress to create age-appropriate looks for their young models.

Tonight’s episode of Project Runway begins with the remaining designers in their apartment. Sean and Kini are still riding high off their double win at the rainway last week. Emily calls her daughter, who she has been missing terribly lately, before they head to work. They meet Tim Gunn at the American Girl store, he introduces them to Heather, the senior designer at American Girl. They are launching a new line of American Girl dolls called “Be Forever.” This week they will be designing a modern and inspirational look for young girls, and are provided with pre-teen girls to serve as their models. Tim gives them thirty minutes to learn the characters of the dolls they are given, and take their models’ measurements.

Tim takes the designers to Mood to pick up fabric for this week’s challenge. Korrina is waiting for the sales person to cut her fabric, and Sandyha literally throws her fabric on top of her’s and asks the salesperson to cut her a yard. Korrina informs her that her fabric isn’t one yet, but Sandyha doesn’t care. She tells the salesperson she’ll come back for it and goes off to find more fabric. Korrina can’t stand Sandyha, but Sadyha doesn’t care and thinks that Korrina has disliked her since day one and she has thick skin so it doesn’t bother her. Emily is feeling confident about this week’s challenge, half of the designers haven’t ever made children’s clothes before, but Emily has a children’s clothing line that she created and her daughter models for.

The designers head to the work room with their dolls, and the books that go along with them, and get started on their designs. Korrina has a Spanish doll, and is creating her own print with multiple cottons for her doll’s outfit. Kini’s doll is a spoiled rich girl, and is making a hounds tooth coat with a dress underneath it. Sandyha’s doll is from the 1800’s and her dad is a shipmaker, so Sandyha is creating a jumper with tiny ship anchors appliques all over it.

Tim Gunn arrives to check on their designs, Alexander’s doll is from the 1970’s, so he is making a denim jumper with a sleeveless jacket. Korrina watches from afar and think that Alexaner’s jumper looks too “home made,” like her mom made it for her. Emily’s doll is from Russia, so she is making a big hoop dress with a jacket. Tim warns her that her dress might be too “grown up,” and not appropriate for children. Char’s doll is a Native American horse-rider, she is creating a vest with fringe for her. Tim tells her that it is going to look cheap and he is afraid it will flop.

Sandyha shows Tim her sailboat jumper with a frilly waste and white pants. Tim tries to tell her that the design isn’t working, but she reassures him that it will be “beautiful.” Tim admits to her that he doesn’t like her color matching and designs, but for some reasons the judges do. Sandyha clearly doesn’t want any of his advice, so he tells her to “carry on,” and leaves. The other designers watch from a distance, and all seem to agree with Tim that Sandyha’s jumper is a mess.

The girls arrive for the model fittings, and the designers begin trying their outfits on their models. Alexander is baffled because his model doesn’t fit in the outfit he made at all, he decides that kids a re just “weird shapes.” Char decided to go with the fringe even though Tim told her it would look “cheap,” and she is happy she followed her gut instinct because she loves the way the fringe vest looks on her model. Kini decides his dress looks boring on the model, so he adds a frilly skirt to it to “spruce it up a bit.” Korrina realizes she is in over her head, and there is a good chance she won’t be able to finish her design.

After working all day the designers head back to their apartment, Korrina vents to Amanda and Char that she doesn’t think her dress is going to be done. Emily finds Sandyha crying in her bed, she tells Emily that she is upset because the other designers don’t respect her. She doesn’t understand why she is nice to all of the other designers, and none of them are nice to her in return. Emily tells her to get some sleep and she will feel better in the morning.

The next morning the designers rush back to the design room to finish their outfits before the runway show. Korrina gets straight to work, hoping that she can finish her dress. On the other hand, for the first time ever, Amanda has extra time on her hands and uses that time to add some hand stitches. The models arrive for their final fittings, and the designers pick out their hair and make-up for the runway.

After the runway show Heidi announces that Amanda and Alexander’s scores qualified them to be safe and they can leave the runway. The remaining six designers on the runway are the three best and three worst outfits of the fashion show. The judges tackle Sean’s design first and aren’t impressed with his jumper, they think it was “too safe” and “snoozey.” Korrina’s dress is a hit with the judges, they love the graphical element of the dress and the colors that she chose. Sandyha’s sailor jumper isn’t a winner with the judges, they think it looks like a baby’s onesie and a “circus flamingo.” Sandyha argues with the judges and tells them that she doesn’t agree with them but she thanks them for their feedback. The judges rave about Kini’s dress, and Elizabeth Moss gushes that she wants him to make one that fits 31 year olds. Char ignored Tim’s advice and went with a fringe vest, and she made the right choice because it is a hit with the judges. The judges think that Emily’s dress looks too dark and sad, and they aren’t fans of the crochet sweater over her dress.

The judges discuss the scores among themselves, and then call the designers back to the runway. They announce that this week’s winner is Kini, Char and Korrina are also safe and in the top three. The bottom three designers are Sean, Sandyha, and Emily. Heidi announces that Sean and Emily are safe this week. Sandyha is officially eliminated from Project Runway.