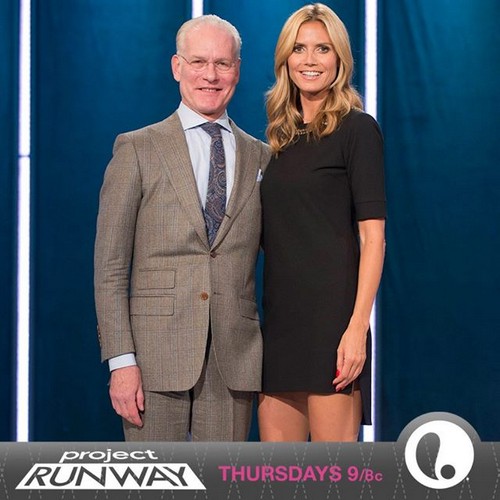 Tonight on Lifetime Emmy Award winning Tim Gunn’s Project Runway returns with an all new Thursday September 11, Season 13 episode 8 called, “Rainway.”  On tonight’s episode the designers are challenged to create avant garde looks that must be able to withstand rain.

On the last episode pieces of Chopard jewelry inspire looks. Also: The designers visit a museum exhibit featuring the work of designer Charles James. Guest judge: Caroline Scheufele, co-president of Chopard. The top three designers were Amanda and Sean, Korina was the winner of this week’s challenge. Kini, Alexander, and Samantha were in the bottom three this week, and the judges had decided to give Aleander another chance to redeem himself. Samantha was officially eliminated from Project Runway. Did you watch the last episode? If you missed it we have a full and detailed recap, right here for you.

On tonight’s episode the designers create avant-garde styles that must stand up to the elements, particularly rain. Actress Caitlin Fitzgerald (“Masters of Sex”) is the guest judge.

Tonight’s episode of Project Runway begins with the designers at their apartment, Sandyha is still devastated over Samantha being sent home. Korrina is riding high from winning the last challenge and brags that she not only won immunity, but won the LAST immunity. The designers head to the runway and Heidi and Tim present them with their next challenge, they have to create designs for the “Rainway.” This week the models will be walking down the runway while it rains on them, the designers will receive $300 to create high-fashion rain gear.

They head to the work room to start working on their designs, Amanda is working on a Cleopatra themed design. Kini is working with an upside down umbrella skirt. Sean is thinking outside of the box, and plans to use a white dress with fabric dye in it, so when the model walks down the “Rainway” the colors will run down the dress when they get wet.

The designers head to Mood to purchase their fabrics. It’s a mad house because they all need vinyl water-proof fabric which is all located in one area. Emily is confident she could win this week with her waterproof catsuit, she purchases black vinyl with a rain drop design.

After purchasing their fabric everyone heads back to the design room to get to work. Fade has no idea what he is doing, but he feels “uninspired.” He’s frustrated because he wants his design to look like something that has never been done before. Sandyha is sewing stripes to create her own neon striped textile, she thinks her design this week looks like an “organized mess.”

Tim Gunn arrives to check in on the designers so far, he is impressed with Kini’s upside down umbrella skirt. Sean shares his dripping dye dress idea with Tim, and Tim announces it is “breathtaking” but he is concerned that there is a huge margin for error if for some reason the dye doesn’t get wet enough and doesn’t run. When Tim arrives at Fade’s station, Fade reveals that he is creating a dress with a “Play button” and a “rewind sign.” Tim isn’t exactly impressed with Fade’s dress, he tells him that it needs something “loud and graphic.” Sandyha shares her striped jumpsuit and textured cloak with Tim, he tells her that it isn’t going to work. But she explains that she hasn’t finished the centerpiece and the coat is going to “take it to a higher level.”

Korinna’s dress if a tribute to a Thunderbird, and she plans to put wings on her model. Tim isn’t sure if it is going to work, but Korinna isn’t concerned because she has immunity this week. Fade is still concerned about his dress, but Amanda gives him a pep talk and reassures him that his design is going to work. The designers all head home, and since they have two days to complete their designs instead of just one, they decide to sit on the roof and drink wine all night.

It’s the second day of the “Rainway Challenge,” the designers head back to their workroom. Korinna sees her design and realizes that it looks like an Olympic Bob Sledder, she is thankful that she has immunity this week. Sandyha gets to work making pin wheels and attaching them to her dress, she thinks that when the rain falls it will turn the pinwheels.

The models arrive for their first fitting, and are shocked when the designers fill them in on the rain on the runway. Amanda laughs when she sees Kini’s dress in the model because she thinks that it looks like some sort of bondage costume. Once Fade’s dress is on his model, he thinks it looks amazing and is no longer stressed about the runway. The designer’s time is up, they pack all of their designs in to boxes to have them shipped to the “Rainway.”

The next morning the designers are up bright and early and head to the make-up and hair studio to pick out their model’s looks. Afterwards they head backstage to help their models in to their crazy designs. Amanda begins panicking because she is afraid that the water is going to make the eyeballs fall off her dress. Sean puts the finishing touches on his dye dress, and hops that it runs perfectly when the model hits the runway.

The designers and the judges take their seats, and the rain starts pouring down on the runway, the models begin parading down in their avant-garde rain gear, the judges have no idea who’s design is on which model. Sean’s color-changing dress pulled it off without a hitch. After the runway show, the judges announce that Amanda, Char, and Alexander are safe and can head back stage. The remaining six designers on the run way have the three highest and the three lowest scores, one of them will win the challenge and one of them will be going home.

The judges tackle Kini’s dress first and rave about his upside down umbrella dress, they think that it is very clever to incorporate the umbrella in to the rainway challenge. The judges gush that he Kini “brought it today big time.” Heidi isn’t impressed with Korinna’s dress, they think that the material she used makes it look like a Halloween costume, and state that it is “lackluster.” They tell her that she is very lucky she has immunity this week. The judges actually like Sandyha’s dress and her pinwheels and striped jumpsuit, however they think it is a little child-like. Fade’s dress isn’t a hit with the judges, Heidi thinks that it looks like a subway map, they wished that he had somehow incorporated the rain in the design. The judges rave about Sean’s dye dress, and Heidi says that he “created a special moment in the rain.” Emily’s armor dress is a flop, the judges tell her that it was cliché and predictable.

After taking a closer look at the dresses backstage the judges return to the rainway to announce the results. Kini, Sean, Fade, Emily, Sandyha, and Korrina line up in front of Heidi Klum and the rest of the judges. Heidi announces that Sean and Kini’s dresses tied, and they are both the winners of this challenge. The judges have decided that Fade’s design was the worst this week, and he is officially eliminated from Project Runway.