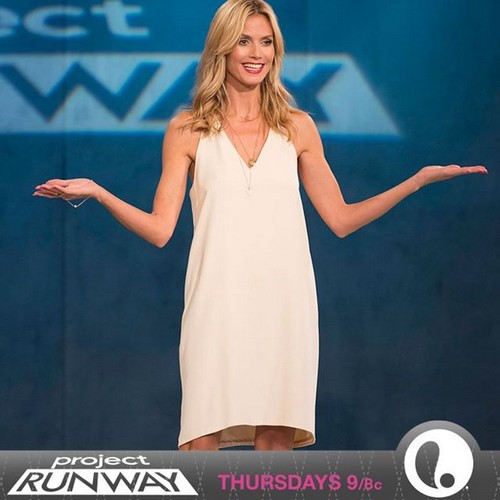 On the last episode the clothiers created unconventional wedding dresses. Dita Von Teese and Chiara Ferragni were the guest judges.Sean and Kini were the winning team, and Sean was the winner of the challenge. Emily, Fade, Alexander, and Samantha were safe were told to leave the runway. Sandyha and Char were the losing team. Char was officially eliminated from Project Runway. Did you watch the last episode? If you missed it we have a full and detailed recap, right here for you.

RECAP: Tonight’s episode of Project Runway begins with the designers preparing to head to work to learn their next challenge. Since Char left, Korina and Sandyha are missing her terribly. Meanwhile Sean is riding high off his two week winning streak, and feeling very confident about the next challenge.

The designers head to the runway where Tim Gunn is waiting with jewelry cases full of Chopard diamonds. For this challenge the designers will have to create an extravagant evening gown to match a set of the jewels for a red carpet look. Their models will wear the jewels on the runway along with their dresses. Tim chooses the designers names out of a bag at random, and they get to choose their jewelry in that order. Tim sends the designers to sketch for thirty minutes before they head to Mood to buy their fabric.

While the designers are sketching, Tim interrupts them. He announces that he has decided to use his “Tim Gunn Save” and bring Char back in to the competition because he feels a void since she was eliminated. Char arrives at the studio and Tim shows her what jewels she will be working with. Now that Tim Gunn has used his save, he will not be able to save any of the other designers for the rest of the season.

Tim takes the designers to Mood to pick out their fabrics. Char has learned her lesson, and is not going anywhere near the yellow section this week. Korina picks out a red velvet Southwest themed fabric to make a coat to go over her dress, she thinks it is going to set her design apart from everyone else’s. Samantha and Sean pay for their fabric and then realize that they both picked out the same fabric, Samantha is concerned that the judges are going to pit their designs against each other.

The designers head back to the work room and begin their red carpet dresses. Kini is already having issues with his top, he is trying to insert underwires for the chest, but they aren’t shaped correctly. Tim arrives to check in on the designers’ work so far. He stops by Char’s station, and is concerned about her neckline, he says it looks like a wedding dress, not a red carpet dress. Tim tells Kini that he needs to bring his hem down because his dress looks “short and hoochy.” Tim is also unimpressed by Korina’s Southwestern coat.

Tim loves Sean’s gown so far, he says it is going to be a “wow moment” on the runway. Samantha’s simple blue dress is the first dress she has ever made, but Tim tells her that she needs to “step it up,” because there is nothing that stands out about the piece. Alexander’s dress doesn’t meet Tim’s standards either, he flat out tells him that the neckline is not going to work with the necklace that he chose.

In the breakroom Kini confesses to Samantha that he is really stressed out about this competition and he doesn’t think his dress is going to impress the judges. The models arrive and the designers begin fitting their dresses on them. Kini has to reconstruct his dress because the breast cups don’t fit his model. Amanda doesn’t even have anything to put on her model Samantha is feeling good about her design right now, but Amanda thinks her dress looks like an “elegant snoozefest.”

Amanda’s dress is a hot mess. She comes to the conclusion that she is going to have to scrap her entire dress at 11:00 PM. Time Gunn arrives and tells the designers that their time is up for the night, so Amanda will have to return in the morning and start from basically scratch.

The next morning the designers head back to the work room, they have two hours to work until the models arrive to be dressed. Korina has never been on the top, but she is certain that her upholstery coat is going to get her noticed by the judges. Amanda begins fitting her model, and realizes that she has no time and has to stick to her original design. Korina’s coat is done and she thinks it looks amazing on her model, but she still hasn’t even made the dress that goes underneath it. Some of the designers head to the salon to help pick out their model’s make-up and hair.
It’s thirty minutes until runway time, the designers rush around to finish up their designs. Alexander is out of time, so he literally hand sews his model in to the dress. Kini laughs that you can still see the pins in Alexander’s hems. He is sure that his dress is going to be on top again in comparison to everyone else’s designs.

It’s time for the runway show, the designers and judges take their seats and the models parade down the runway in their versions of red carpet gala dresses. The judges will be blind judging on the runway, they don’t know which designer created which dress.

After the runway show, Heidi Klum announces that Fade, Emily, Char, and Sandyha are safe this week. The remaining six designers have the highest and the lowest scores of the competition, one of them will be named the winner and one of them will be eliminated. First the judges tackle Kini’s dress, they think that the cups of the dress are messy, but they like the way it flows. Amanda’s design actually turns out to be a hit, Heidi commends her for taking risks. Korina’s upholstery coat is also a hit with the judges, they tell her that it is her “best work so far.” Alexander’s dress bombs with the judges, they can see the pins and call the fabric “scary,” and you can’t see the necklace. Samantha’s dress is too “drab” for the judges, Heidi thinks that it is boring and she should have pushed a little harder.

It’s time for the judges to reveal the results. Heidi Klum announces that this week’s top three designers are Amanda and Sean, Korina is the winner of this week’s challenge. Kini, Alexander, and Samantha are in the bottom three this week, and the judges have decided to give Aleander another chance to redeem himself. Samantha is officially eliminated from Project Runway.