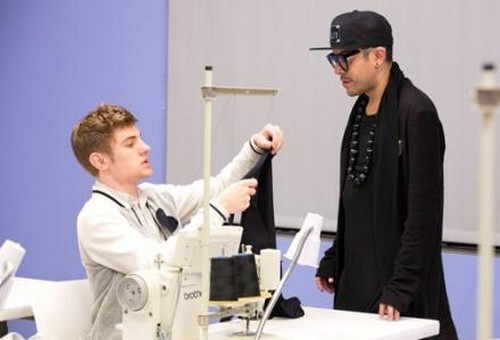 Tonight on Lifetime Emmy Award winning Tim Gunn returns with another new episode of PROJECT RUNWAY: UNDER THE GUNN called, “Steampunk Chic.”  On tonight’s episodeThe designers create an avant-garde, steampunk look.   Did you watch last week’s episode?  We did and we recapped it right here for you.

On tonight’s episode Anya confronts one of her designers and questions whether he actually created the work presented in his portfolio.   Now her designers will pay for it this week. Meanwhile, the designers create an avant-garde, steampunk look.

Tonight’s episode is going to be another drama packed one, which you won’t want to miss. So be sure to tune in for our live coverage of Lifetime′s Under the Gunn Season 1 Episode 7 at 9PM EST! While you wait for our recap, hit the comments and let us know how excited you are about the new episode of Under The Gunn tonight.

Tonight on Project Runway: Under the Gunn, the designers create an avant-garde, steampunk look. Meanwhile, Anya confronts one of her designers and questions whether he actually crated the work presented in his portfolio.

First the team of designers recap the previous week. Anya is getting frustrated with Nicholas. Nick is feeling more positive. He wants to really focus on Stephanie and wants Natalia focused. Everyone is very excited about the steampunk theme. Retro-futurism is the look and the designers are getting pumped at the thought of what they can do. Natalia says this is right up her alley. The teams have two days for the challenge.

The teams begin scouring the tables in front of the steam trains for materials they can use. Shan is a little intimidated by this and Anya tries to talk him through with some good advice. The teams are going on a trial trip for fabric and the mentors get to come along! The mentors are checking out what the designers are looking at and offering advice. Sam complains about Oscar’s big head after having one win under his belt.

The designers head back with their fabrics and Tim walks in to let them know that he and the mentors won’t be back to see them until the next day. The designers are on their own to get started! Blake is feeling really nervous about what Anya is going to say. Anya’s team talks about the fact that they haven’t won any challenges yet.

The next morning….Natalia is going way out by creating a dress that has a rolling mechanism. Blake scrapped everything from the night before and is coming with a whole new look. Tim and Nick tell Oscar that while they like the initial design, but as Oscar added a layer with a graffiti look, they thought it was not classy enough. Natalia and Tim look perplexed about her idea, but she is very confident. Tim applauds Nick on giving better critiques.

Mondo loves Asha’s dress. He gives good advice to Sam who is making good progress. Anya and Tim visit Shan who still seems unsure of himself. They give him a good advice. Anya does not understand Blake’s explanation of his design and tells him so. He is obviously frustrated and tells him he just doesn’t get it. Anya tells him she is getting frustrated with him because every week he seems to be getting more discouraged. He feels she is a drill sergeant now. Nicholas begins to share his design and Anya gets upset that he is so behind. Tim says the same. Nicholas seems uncomfortable and tries to assure Anya and Tim that he can make up for time when he starts sewing on the machine.

It’s fitting time! Nicholas is very behind and Anya is concerned because she cannot see his design until it is too late. Tim mentions to Anya that Nicholas is having a leisurely lunch. She goes in to talk to him and questions whether or not his portfolio is his work because she is not seeing that level on the runway.

Natalia needs help draping her dress and finishing up her mechanical aspect. Anya is disappointed in Nicholas’ design and he has almost given up. The other mentors feel for Anya. It is runway time and Nicholas is still stitching. Mondo feels good about his team

Asha is really happy with her design and Mondo is happy. Sam came up with a unique jacket. Michelle’s design is insane fabulous. Very well-constructed and great use of color. Nicholas is happy with his look but Anya thinks it is not strong. Blake likes the way his design flows, but Asha is not impressed. Shan put his nervous energy to good use and he pulled off an amazing design and Asha agrees! Nicholas comments that Oscar’s look may be a little too much. Nicholas feels Stephanie’s design is not avant-garde enough. Natalia’s design is next amd she pulled it off and her model rolls the dress up.

Stephanie: drab, depressing, and looks like a costume. She missed the mark.

Natalia: striking and strong, like the delicate lace with hardware, love the moving parts, superb job.

Nicholas: like the menswear idea, this is not avant-garde, no wow-factor, simplistic.

The judges have asked Anya to send home either Nicholas or Blake. Nicholas is going home. He seems pretty crushed.

Shan and Natalia are up for the winning design. Shan is the winner!