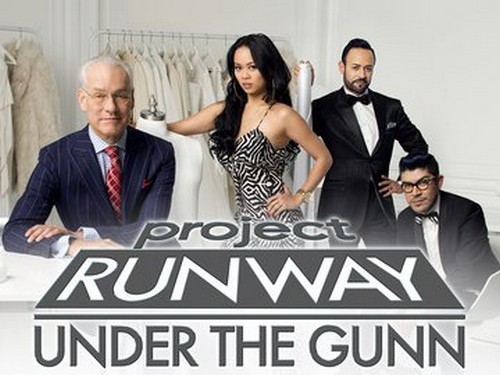 Tonight on Lifetime Emmy Award winning Tim Gunn returns with another new episode of PROJECT RUNWAY: UNDER THE GUNN called, “Team Challenge.”  On tonight’s episode the first team challenge requires the designers to create mini collections.  Did you watch last week’s episode?  We did and we recapped it right here for you.

On last week’s episode the designers are tasked with designing a look for the pop sensation and star Zendaya! Zendaya wears the winning look at a concert.  Zendaya was so excited she tweeted out to her fans to remind them, “Tomorrow’s @ProjectRunway #UnderTheGunn challenge? Designing a performance outfit for me! See you at 9/8c only on @lifetimetv.”

Tonight’s episode is going to be another drama packed one, which you won’t want to miss. So be sure to tune in for our live coverage of Lifetime′s Under the Gunn Season 1 Episode 6 at 9PM EST! While you wait for our recap, hit the comments and let us know how excited you are about the new episode of Under The Gunn tonight.

Tonight on Project Runway: Under the Gunn, the first team challenge requires the designers to create mini collections

The designers discuss the prior week and Nick takes some heat for the way he handled the Isabelle situations. Granted, she was very difficult to mentor, but a good mentor takes responsibility for his team and the outcome. Last week, Nick completely threw Isabelle under the bus and put all the blame for her poor design on her because of her lack of ability to plan better and use her time wisely. He did apologize on camera to her.

This week the designers head to Getty Villa, where there is an exhibit, “The Last Days of Pompeii.” This was the perfect setting to introduce the next challenge. Designers will be creating a three-piece collection inspired by the movie Pompeii, out tomorrow, and the exhibit. One designer from the winning team will win, while one designer from the losing team will be sent home.

The mentors meet with their teams and start brainstorming ideas. Nick’s team seems bothered that he is not listening to their ideas. He seems to know what he wants from them and is not letting them use their creativity as much as they’d like to. At Mood Fabrics, Anya is waiting to collect her team together to see everything at once before they start cutting. The mini-collection has to be cohesive so she made a good decision. Mondo’s team is planning to make their own textile.

In the workroom, everyone is busy working. After a great week last week, Mondo’s team seems to have had a good boost and have gained more confidence in him. Anya’s team is unsure about how to work together to get the look for the collection they’re going for. Shan is feeling frustrated that he is not hitting the mark on this project.

Nick’s team seemed to have lost some faith last week and are starting to rebel and not work so well together. Oscar is completely doing his own thing, and obviously doesn’t trust his mentor to lead their team, even calling his team the weakest. Tim and the mentors begin their critique with Mondos team being told their textile looks like an arts and craft number. Anya continues to try to mesh her team together to form one connected look. The focus on Nick’s team is the way they are not working together.

It’s runway day and the pressure has brought Nick’s team together. All the designers seems happy with what their team produced. Let’s hope the judges agree!

Nicholas’ look was amateur and did not look put together. Blake went for the safe…a simple black dress. Shan did better than he gave himself credit for, but it certainly wasn’t amazing. He did pull off the best design for his team.

Despite all their issues, Nick’s team really pulled off a nice mini-collection that included well-constructed items, detail, and a complete look.

Michelle does it again and pulled off another good design. Her dress was the best of Mondo’s team. Sam came through with a sleek look and Asha just missed the mark.

The winning team is announced: Nick’s team! Anya’s team is on the bottom, and therefore, someone on her team is going home tonight.

Oscar: Oscar got a lot of props tonight by all of the judges

Nicholas: Overall consensus by the judges is the design looked thrown together-Jen even said it looked like her young nephew cut the fabric. Rachel tries to take it easier on him by applauding his idea.

Blake: Wendy says the belt is overwhelming, though Jen liked it

Shan: too much embellishment on the top, compared to a mummy

A twist tonight!! The two designers on the bottom got to stay!! The judges want to see more from both of them. No one went home.