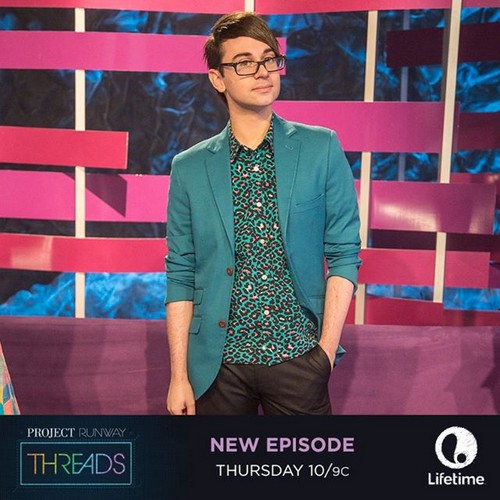 Tonight on Lifetime Project Runway Threads continues with an all new Thursday November 20, season 1 episode 4 called, “Prom” and we have our weekly recap below for you.  On tonight’s episode, young designers become the boss and share their view of fashion’s future.

On the last episode, three young designers fashion looked suitable for their favorite pop stars in a challenge complicated by an unexpected twist. Zendaya served as guest judge. Did you watch the last episode? If you missed it, we have a full and detailed recap right here for you.

On tonight’s episode are you ready to see some fabulous teen fashions tonight?  Three young designers become the boss of “Project Runway” alumni in this competition.

Tonight’s episode is going to be another drama packed one, which you won’t want to miss. So be sure to tune in for our live coverage of Lifetime′s Project Runway: Threads season 1 episode 5 at 10PM EST! While you wait for our recap, hit the comments and let us know how excited you are about this new episode of Project Runway: Threads tonight.

Kimmani, 13, is a sassy, strong willed girl who started sewing a year ago and whose dream is to be an international fashion designer. She says her other dream is to buy Jamaica. Her diva attitude has caused her to clash with her mother. For the show your style challenge, she shows a blue sleeveless top and a blue skater skirt.

Bella, 12, has a boho, beachy aesthetic. She dreams to move to NYC to model her own designs. Although she is quiet, she is confident and a fierce competitor. Her grandma will be her assistant for the competition. Her show your style look features a halter top, sheer bellbottoms and a headpiece.

Tyler is strong, determined and hilarious. He started designing at age 7 and his ultimate goal is to make real women feel like goddesses. His idols include designers McQueen and Marat. His show your style look is a dramatic cape with roses on it over a red floor-length dress. His look is meant to be symbolic of abusive relationships. He was severely bullied, and his loneliness caused him to turn to fashion.

Kimmani wins the show your style challenge. “I am really proud of myself because I didn’t come here to lose, I came here to win,” she says.

The competitors are surprised by balloons coming from the ceiling and a sign that reveals to them they will be designing for the Project Runway Prom. They will have just one day to make their looks, with unlimited access to the design studio and JoAnn Fabrics supplies.

Bella wants to make a long dress with a sweetheart neckline. Kimmani is designing a circle skirt with a top.  Tyler is designing a corset-like bustier top with a cinched chiffon skirt. He wants his look to accentuate the model’s curves.

The contestants find out about their surprise door twist, where they must create a second look using flowers. They can create a dress entirely out of the flowers or use the flowers to decorate the white dress. All of the designers are extremely worried. “I’m wondering what this advantage is and when I’m going to get it,” Kimmani says.

Next, they are told to be successful fashion designers they need to be able to control a team, and that they will be given second assistants.  The assistants come out, and they are previous Project Runway contestants.

Tyler sewed his black corset together with white thread after not being able to find the black.

Kimmani has not yet used her challenge win reward, and Tyler praises Bella’s assistant in order to get Kimmani to take him. “He does couture,” he tells her.  Kimmani says to him that she won’t take his assistant.

Kimmani ends up keeping her promise and taking Bella’s assistant.  “I can’t believe this is happening,” Bella says. “This is so awful.” Now she is concerned about being able to finish.

The designers are all scrambling to finish their second looks with one hour left before the runway show.  Tyler describes Bella’s look as a “sparkly hamburger.”

At the fashion show, these young children show that they have no idea what a prom is or what anyone would wear to the prom.

“I really wanna cry because I’m really, really happy with the outcome of the first dress,” Tieler says. “I’m excited. I’m ecstatic.” “I do feel like a true fashion designer,” he continues. “I feel on top of the world.”

Kimmani’s inspiration was what she would wear for prom, which is something colorful.  Siriano praises her first outfit for being futuristic and for showing attention to detail. He says her second dress should maybe have more flowers.

Tieler says his inspiration is a grunge girl who steps out of her comfort zone to be a classy grunge woman. He describes his second look as being a pop of color as well. His first dress is criticized for being too sophisticated for the prom. His second dress is criticized for white spots that are showing. He is told he has to pay attention to detail as a designer.  “If Kimmani wins, I’ll be in total shock,” Tieler says.

Tieler ends up winning the competition, seemingly because his first dress looked the most like an actual prom dress.