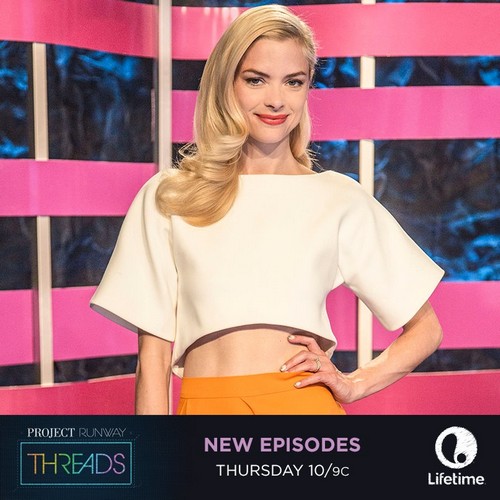 Tonight on Lifetime Project Runway Threads airs with an all new Thursday December 18, season 1 episode 8 finale called, “Show Stopper” and we have your weekly recap below. On tonight’s finale episode, a standout look is created for the young designers’ runway show. Guest judge: Jaime King.

On the last episode, the designers had to create a cover-worthy look for “Seventeen” magazine. Did you watch the last episode? If you missed it, we have a full and detailed recap right here for you.

On tonight’s episode as per the Lifetime synopsis, “The designers must create standout final looks for their runway show.”
Which teen do you think will take home the win?

Tonight’s episode is going to be another drama packed one, which you won’t want to miss. So be sure to tune in for our live coverage of Lifetime′s Project Runway: Threads season 1 episode 8 at 10PM EST! While you wait for our recap, hit the comments and let us know how excited you are about this new episode of Project Runway: Threads tonight.

Project Runway: Threads is all about showcasing young talent in the design world. Yet Zoe at 15 is admittedly very out there. So on tonight’s all new episode she created a “Depression” piece with flowers that upon closer inspection appear to be all torn up. It’s supposed to be a statement kind of piece but Judge Christian Siriano actually said he wanted to see more of an outfit and less something artsy.

Though, while Zoe may have gone overboard for the challenge “Show Us Your Style”, she still came out ahead when she went up against Maddy and Christopher’s designs.  Maddy was told she needed to add more structure to her work. Her outfit was bit “all thrown together”. And as for Christopher, he added more detail than Maddy and the judges definitely got a sense of his vintage style.

But ultimately the first challenge had to go to Zoe. Especially as no one else put as much of their individual personality into their outfit like she did. And because she won – Zoe was given a one on one consultation with Christian. Something she was bound to need after the judges then told them they were going to have to build a runway look (as part of their collection) with not a lot of time.

These are kids, remember. So the sewing is usually a child/ parent effort with the kids running the show. And kids tend to not know and/or understand the best way to articulate what they really want in terms of their “vision”. So really they needs as much time as humanly possible.

When Zoe later got the chance to talk to Christian, he helped her translate some of her somewhat chaotic thoughts towards her design. And then he told her that as the challenge winner – she could also give the other contestants the chance for a one on one with him. But she said “no” to that. Zoe didn’t see the point in having an advance if she was going to have to share it. THEN IT WASN’T GOING TO BE AN ADVANTAGE.

However the designers were given a shock. Before they could even finish their first outfits – they were told they had to create a second look.

So that threw a spanner in the works. Some of the designers hadn’t even finish mapping out what they were going to do with one outfit but now they had to think about a second outfit. Then on top of that Vanessa Simmons came back with even more dire news. She told the designers they weren’t allowed to touch their product for a full hour. All they could do was tell their assistants (parents/grandparents) how they wanted so and so done.

Hence that hour was essentially a failure for everyone involved!

The next day thought wasn’t that much better. The designers were all rushing to complete a second look and no one seemed to be happy about what they had pulled off. Thankfully their second look was just supposed to be an appetizer. Their first looks was always going to be the grand finale.

After the designer rushed through their second look, it came time for the runway and surprisingly those that had doubted themselves beforehand were suddenly filled with confidence after they saw their work in action. For instance, Maddy almost hated her dress when she was working on it. That’s how bad she thought it was going to turn out but seeing it in motion – she realized her look captured everything she was aiming for. And the same goes for Zoe. She didn’t know how her dresses were going to look until she saw the models rock it on the runway.

Christopher on the other hand was regretting cutting his dress. He thought he was going to be perfect short and only realized his mistake after seeing it in action.

And the worst part about that is that Christopher knew the judges were going to say something about the length and that’s first thing they mentioned. They all said they liked his dresses. Even if they weren’t that original. But he would have would have at least been final two if dress had been longer.

Yet that was not case. So actually the competition came down between Maddy who made her clothes look like water in motion and Zoe who created a line that was referred to as ugly pretty. Both of these young women had great futures ahead of them but only one could win Project Runway: Threads.

With her unusual style and story behind every piece – it was clear that she was going to be the winner all along! And now that she’s won – maybe she’ll start being nicer to her dad who helped reign her in when she didn’t think she needed him!