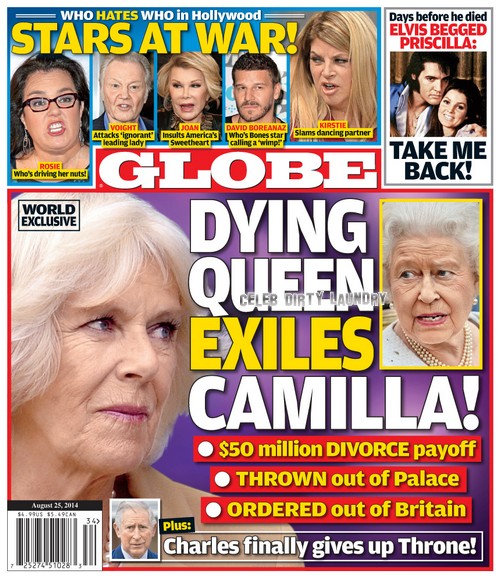 Well, this has been a very long time in coming! I’m talking about the fact that Camilla Parker-Bowles has finally been thrown out of the palace once and for all! It is really amazing how much nonsense that Queen Elizabeth put up with before finally taking some sort of serious action against Camilla. She was Prince Charles’ side chick for three decades before finally being made his wife. 3 decades of disfavor meant that Cami always had one heck of an uphill battle in getting Elizabeth to even tolerate her.

In the last year Camilla has really upped her game, thinking that is she vilified Kate Middleton while putting major pressure on Charles to fight for his birthright or else face a $350 million divorce, the pieces would fall together Kate would crumble, Charles would persevere and Cami would be the next queen. Instead Charles doesn’t care much about becoming King and the only thing that may matter less to him is staying married to his constantly drunk wife!

According to the Aug. 25th print edition of GLOBE Magazine everything has blown up in Camilla’s face in a way that she never really imagined. After Kate Middleton’s reported miscarriage of royal heir number two Queen Elizabeth has become more protective of her than ever. She realized that the stress caused by Cami can have a direct affect on Kate’s ability to reproduce and that enlightening moment prompted Queen Elizabeth to take action. Sources say that Camilla has been ordered not just from the palace but out of all of Britain! Forget about the $350 million she previously tried to demand, Elizabeth has reported her a $50 million pay off just to leave. No word yet on Cami’s reaction but if she’s smart she’ll take the money and run, right?

GLOBE always has the inside track on Hollywood and in the Aug. 25th issue they offer up a story of how Elvis actually begged Priscilla Presley to take him back just days before his untimely death. If she had said yes do you think that it might have saved Elvis’ life?

Speaking of Hollywood, who doesn’t like to hear the details on some of the biggest celebrity feuds and who hates whom?and this week GLOBE is dishing all of the dirt on some of the most recent fights – including some nasty ones over political issues! Included in the melee are Jon Voight (our favorite actor), Joan Rivers, and loudmouth Rosie O’Donnell. You’re going to want to grab yourself a copy of the Aug. 25th print edition but in the meantime – can you believe that Camilla has finally been given her walking papers?

Once again GLOBE breaks down barriers to report on what’s really going on inside the Royal Palace. Without GLOBE’s brave reporting we would never know all the details of Queen Elizabeth and Kate Middleton’s relationship or just how awful Camilla Parker-Bowles really is! I can always count on GLOBE for hours of reading pleasure so I’ll be heading out soon to get my copy.