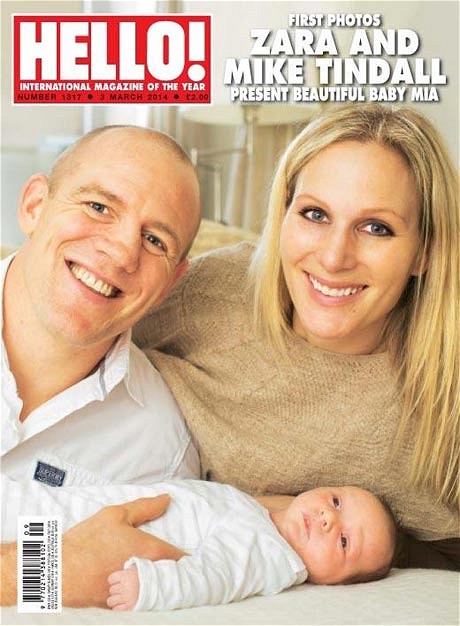 Kate Middleton > Zara Phillips? At least in Queen Elizabeth’s mind. According to reports, the Queen is not happy AT ALL about Zara’s decision to sell baby Mia’s photos to Hello! Magazine for a rumored £100,000 (The Royalist).

Mia is the Queen’s fourth great-grandchild, and Zara was reportedly one of the Queen’s favorite grandchildren, although I think that’s going to change now. In the Queen’s mind, none of her grandkids should be selling pictures of their babies to tabloids, which is famewhore-y and only done with movie stars and celebrities – not royals.

So far, Buckingham Palace hasn’t come out with an official response at this latest royal scandal, and they’re also refusing to say anything about the Queen’s thoughts on this matter. The Queen wasn’t happy when Peter Phillips [Zara’s brother] sold his wedding photos to Hello!, and she’s not going to be happy that Zara sold Mia’s photos to the same tabloid. After all, Hello!’s often responsible for printing tabloid speculation on the royal family, although they do have a relatively favorable relationship with the royals, at least in comparison to other British tabloids [Daily Fail anyone?].

It’s actually kind of sad really – Zara’s an Olympic showjumper, and she feels the need to resort to selling baby pictures to make cash? I mean, did she really need the money? Plus, she’s sullying the pristine image that the royal family’s managed to cultivate, at least in the Queen’s mind. What I wouldn’t be to give in that room when the Queen and Zara meet next, but sadly, I don’t think the details of that meeting will be released to the public.

What do you guys think about Zara selling her baby’s photos to Hello? Sure, she couldn’t have posed outside the hospital with her baby like Kate did, but maybe she could have held a conference or… well, anything apart from selling the pictures to Hello?