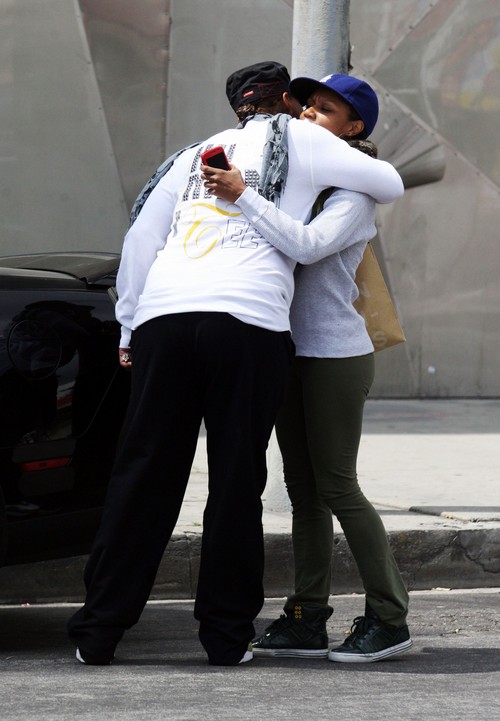 According to a mysterious report, the legendary Rapper and actress Queen Laifah is marrying her alleged girlfriend of four year, Eboni Nicholas. However, before anyone gets excited enough to go checking for a wedding registry, then we should at least have a look at the source for this article. I mean a lot of us love Queen Laifah and have always been supportive of her, but she has never actually announced her sexuality. And the picture many people have used as proof that she is in fact a lesbian could have been taken out of context like so many other photos. So is it really likely that she would suddenly want to get married just because she was inspired by Macklemore and Madonna’s Grammy performance?

According to STAR magazine, Queen Latifah hasn’t set a date or a location for the wedding just yet but she’s already told family and friends that she would want to wed sometime this year.

I’m sorry it has to be this way but this is complete bull! I don’t think Queen has ever been ashamed of her sexuality (whatever it may be) although I do believe she keeps her private life separate as a way to escape anyone commenting on her life. As you can see and hear by now that doesn’t necessarily work to the degree she wishes it does. Though it does mean Star Magazine could not have gotten their sources from her camp. She’s had the same people around for years and they’ve never talked before.

Star Magazine appear to be the people fueling this story. Somehow or another they took our question mark and turned her into a giddy bride. I don’t know how they did this and where their sources are coming from. And to tell the truth I wouldn’t be surprised if this rumor started with them. Because who else would go out of their way to not only called someone a confirmed lesbian but to also give her a long-term girlfriend?

How could they have spun such a large story based off of an old picture. Alright, Queen Latifah got her butt grabbed. They do have a point there and I won’t bother denying it event though it could have been an awkward angle. But when did one ass grab make a relationship?