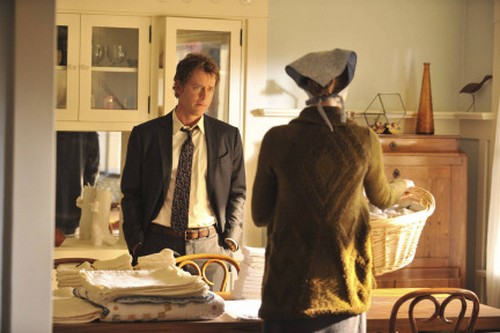 Tonight on FOX their bold new legal drama RAKE airs with its second episode called, “A Close Shave.”  On tonight Keegan (Greg Kinnear) defends a group of reformed Amish men who are accused of a hate crime against an Amish elder.  Did you watch last week’s episode?  We did and we recapped it right here for you.

On last week’s episode in the series premiere, as payment for a late night poker win, Keegan agreed to enter a guilty plea for confessed serial killer JACK TARRANT, expecting to garner a quick burst of publicity for himself off of the case. When Tarrant accused Los Angeles Chief of Police BERNIE MICHAELS of writing all of his confessional testimonies for him, it was up to Keegan to figure out which party was telling the truth, pitting Keegan against the Mayor of Los Angeles, a situation with serious repercussions, personally and professionally. Meanwhile, Keegan received payment from a client in the form of a Pacific Bluefin tuna worth 15 thousand dollars. All he had to do is get the fish to a local sushi restaurant and have them paid him so he can then paid his bookie a portion of his gambling debt

On tonight’s episode Keegan defends three Amish bakers when they’re accused of attempted murder for shaving off the beard of a bishop who was trying to save a woman he thought was in danger. Meanwhile, Scarlet and Ben plan a recommitment ceremony; and Keegan meets a woman on social media who shares…

Don’t forget to come back here tonight at 9 PM EST for your live recap of Rake season 1 episode 2 “A Close Shave.” In the meantime, be sure to hit up the comments section below and let us know what you’re most excited about for tonight’s episode.

Tonight’s episode of Rake opens with an Amish man knocking on the door of a house, three men open in the door. A young girl named Mary appears, and then the three men attack the stranger on their doorstep.

The next morning Keegan and his friend/roommate Ben are trying to make coffee. Keegan is stressed out by all of the planning Ben and his wife Scarlett are doing for their recommitment ceremony. Scarlett, Ben’s wife emerges, and says Keegan is just jealous of their relationship because he can’t commit to anyone.

Keegan heads to his office with his secretary and learns that his new Amish clients have posted bail for their attempted murder charge. Keegan goes to court, and gets “randomly selected for a full body search” by the security officers.

Keegan finally gets in to see the judge, and manages to get his case continued by showing the judge documents in Bulgarian.

After court, Keegan visits his Amish clients. Jebediah, one of his clients, owns a bakery. Jebediah is accused of trying to murder his Bishop with a razor blade. Jebediah denies trying to kill the Bishop though, according to him he was “just trying to shave him.”

Keegan uses the app Luann downloaded on his phone called “Joyride.” Every time he needs a ripe he just has to open the “Joyride” app and tell them where he is, and a random person picks him up. The woman that picks Keegan up recognizes him from television, and realizes he is a lawyer. She needs legal advice, and wants to know what determines “fair market value.” Then she begins hitting on her, so Keegan shares his bread with her from Jebediah’s bakery. He wants to see Brooke, his joyrider again soon, so she tells him to add her as his “preferred joyride driver” on the app.

Keegan meets up with Ed, the lawyer representing the Bishop that Jebediah shaved. Ed reminds Janet, the prosecutor, that the Bishop’s beard is a symbol of his faith and by shaving it off Jebediah committed a hate crime. Jebediah is facing u to 15 years in prison for shaving the Bishop.

Keegan heads to court and begins questioning Bishop Goode. Bishop Goode reveals that he went to Jebediah’s house to “fetchy Mary.” Mary ran away from his Amish town of Paradise, and he was instructed to bring her home.

After court Brooke picks up Keegan, and they listen to a hockey game. Brooke reveals that she likes to gamble, because she studies statistics. They pull over to make out, and Keegan invites Brooke to Ben and Scarlett’s recommitment ceremony.

Keegan stops by his prostitute Nikki’s house, but she smells Brooke’s perfume on him. Keegan reminds her that he pays her to sleep with him, so she shouldn’t really be jealous of him. Nikki denies she is jealous, she just doesn’t want her other clients to smell the “cheap perfume” on her.

The next day Keegan heads back to court with Jebediah. Jebediah claims that the reason the Bishop wanted Mary to go home is because they are a radical Amish group, and before there were just men in the group. But, now that Mary is with them, there is a chance they will start reproducing and the number of people in their radical group is growing.

Keegan tries to discuss the case with Mary, but she isn’t cooperating. Keegan reminds her that if she doesn’t help him and give her information on the Bishop, Jebediah will go to prison. Keegan heads back to court fueled with the information from Mary. Keegan proves to the court that Bishop is a fraud, and has shaved several Amish men. Jebediah and his brothers are found not guilty of attempted murder, but they do have to go to jail for six months.

After court Keegan and his Joyrider Brooke make their way to Scarlett and Ben’s recommitment ceremony. Ben and his mother are both impressed with Keegan’s new girlfriend. The mayor’s wife happens to be at the ceremony, Keegan tries to charm her into “telling her husband to lay off,” but she doesn’t want to hear it.

Scarlett rushes Keegan outside, and tells him that he is right. She wants to cancel the recommitment ceremony because she thinks it is “phony and self-serving.” Keegan tried to guilt her into going through with the ceremony. She brings up the affair she had with Keegan ten years ago before she married Ben. She confesses that she is afraid of commitment. Keegan convinces her to go through with the ceremony, and she heads back down the aisle. Ben is waiting for her at the altar.

When Scarlett is halfway down the aisle, there is a commotion. Ben’s father has collapsed. Brooke confesses that she was having sex with Ben’s Dad in the bedroom when he collapsed. Keegan is furious, he curses Brooke out and then heads off to the hospital with Scarlett and Ben.

At the hospital Keegan and Ben discuss his Dad’s health problems. He is going to be in critical condition for a few days. Keegan breaks the news that “him and Brooke aren’t going to work out.” Ben assumes Keegan screwed it up, little does he know Brooke was screwing his Dad.