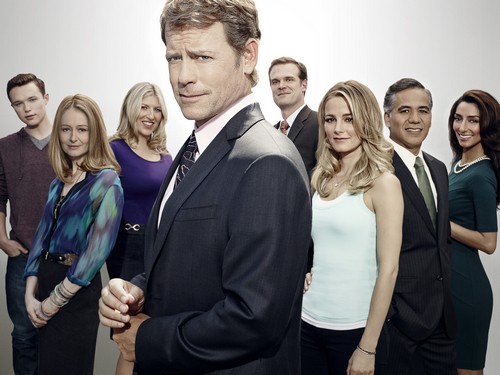 Tonight on FOX their bold new legal drama RAKE airs with its premiere episode called, “Serial Killer.”  The new show stars Academy Award nominee Greg Kinnear, about a brilliant and frustratingly charming criminal defense attorney, whose chaotic and self-destructive personal life often gets in the way of his professional one.

On a single day, Keegan Deane is described as many things. His ex-wife-calls him “unreliable”; his son calls him a “pal”; most judges think he’s “an outrage”; the IRS calls him a “defendant”; and to his former dealer, he’s simply a “tragic loss.”

Brilliant, frustratingly charming and with zero filter, Keegan is one of life’s great addicts. His staggering lack of discretion and inability to self-censor land him the cases that nobody else will touch, but behind that lies a resolute optimism and belief in justice that fuel his dogged determination to defend those who seem beyond redemption. He always tries to do the right thing, but at the same time struggles to save himself from the many self-destructive elements that plague his own life, such as his overindulgence of various excesses, including women and gambling.  Each morning, Keegan tends to wake up bruised – physically, emotionally, spiritually. Usually it’s a combination of them all. Then it’s out into the world – onto the battleground of Keegan’s day.

Don’t forget to come back here tonight at 9 PM EST for your live recap of Rake season 1Premiere “Serial Killer.” In the meantime, be sure to hit up the comments section below and let us know what you’re most excited about for tonight’s episode.

The series premiere of Rake opens in a bar, Keegan Joye is watching a game on the TV with a group of people, and cheering. The team scores so Keegan orders a round of drinks. His friend Roy walks him to the bathroom. Once they are inside, Roy slams into the wall, and says “Victor needs his money.” Keegan promises him he will pay him $15,000.00 tomorrow. Roy leaves the bathroom and Keegan stumbles out. He picks up a random girl from the bar, and takes her with him to a party. Keegan and his new girlfriend head to the backroom so he can play poker until the sun comes up. Keegan wins $5300.00, but the lawyer Jerry doesn’t have the money to him what he won. Jerry hands over the business cards of one of his clients as payment.

Keegan wakes up in a kitchen, surrounded by his brother’s kids. His brother tells him that he “needs to find somewhere else to crash.” His brother Ben reminds him that he was only supposed to be there for one or two weeks, and it has been four months. While Keegan and Ben argue about his living arrangements, the girl he brought home stumbles out to the kitchen. Ben kicks her out and makes her climb the fence in the back-yard. Scarlett, Ben’s wife, emerges and lectures Keegan and Ben about the random women in her son’s bed.

Keegan receives a phone call from Matty, and promises to help him get his driver’s liscense this weekend. He walks outside to get the newspaper and realizes that his car has been towed because he parked in a no-parking zone.

Scarlett agrees to let him drive their SUV as long as he drops their daughter and all of her friends off at school. He has to promise to drive safely though. En route to school with a car full of kids he gets pulled over by the cops for a busted tail-light. Keegan tries to explain to the cops that it isn’t his car, but the cop ID’s him and realizes his license is expired. Keegan has to hand the keys over to the cops, and he has to call Scarlett and have her come pick up all of the kids.

Keegan heads to court with his client. Once they get in the court-room Keegan learns that the prosecutor is running late and court is delayed. The prosecutor finally arrives, it’s Ben’s wife Scarlett, she was running late because she has to go pick up all of the kids that Keegan left on the side of the road.

Keegan’s client has already confessed to murder, but now he is pleading “not guilty.” Keegan heads to the judge’s chambers with Scarlett and the judge and begs to be taken off the case. It was supposed to be in and out, but now that the client is pleading guilty the case could be dragged out for four or five months. The client is in jail and he has no way of even paying Keegan, which means he will have to work for half a year for free. This is the client that his poker buddy Jerry gave him as payment for his poker debt.

Keegan takes his client aside and tries to convince him to plead “guilty.” Keegans client insists that the police forced him to confess, they gave the confessions and told him to copy them.

Keegan heads his friend Nikki’s house. But, Nikki isn’t exactly thrilled to see him. Keegan reminds her that as a prostitute she is supposed to make him feel good, not yell at him for being late. Nikki finally caves and hooks up with Keegan…for $500.00 an hour.

Keegan leaves Nikki’s house and receives a phone call from Roy, he wants to know where their money is. Keegan and his secretary are trying to sell his fish to a Japanese restaurant. The Japanese chefs tell him on a scale of 1-10, his fish is only a 1. They will only pay $10,000.00 for the fish. Keegan refuses to make the sale. He wants the $25,000.00 that they promised him on the phone.

Keegan heads back to his office and sits down with his secretary Leann and tries to make sense of his serial killer case. Keegan is starting to believe that his client is really innocent. He thinks he was forced to confess by the Chief of Police just to clean up a bunch of unsolved murder cases.

Keegan heads back to court and questions the Chief Of Police about writing out his client Jack’s confessions. Chief Michaels wrote a book about nailing all of the murders to Keegan’s client. Keegan declares, “he will not rest until the LA police is held accountable for any wrong-doings against his client.” When he is done proving his client innocent, he plans to sue the police department in civil court for hundreds of thousands of dollars.

Chief Michaels gets lectured by the mayor after court. The mayor and Chief Michaels want Scarlett to tell Keegan to “back off.” Scarlett reminds them he is just doing his job.

Keegan heads to therapy after court, and his therapist reminds him that he is self-centered and only worrying about himself and not his client. His therapist confesses to him that she had a dream about Keegan last night. It turns out his therapist is actually his ex-wife, their son Matty interrupts and makes fun of Keegan for his “free therapy sessions.”

Keegan takes his son Matty out on a driving lesson. Matty tells his Dad to cover for him and tell his mother he slept at his house last week. Keegan receives a phone call from Roy, he wants to know where his money is. Matty freaks out because he doesn’t know how to merge and comes to a complete stop on the freeway. Keegan hangs up on Roy, just as they are rear-ended by another car. Their car gets towed, and Keegan has to catch a ride back to town with the two-truck driver.

Keegan heads back to the court-house for an interview with “On The Record.” After his interview, his client Jack in questioned. Jack freaks out on the news anchor, and basically states he manipulated the Chief of Police. Keegan yanks him off the air.

Keegan and his secretary Leann head back to the office. Their fish isn’t looking so good, his “eyes are turning milky.” Roy is still calling for his money, which Keegan doesn’t have.

Keegan visits Jack in jail and shows him he has proof that Chief Michaels wrote his confessions.

The mayor gives a press conference stating that Chief Michaels has been let go, and he personally thanks Keegan for his discovery.

After the press conference the mayor pays Keegan a visit. He tells Keegan that he has made his life “extremely difficult” and tells him to expect revenge.

There will be no civil suit because Jack did actually kill his first victim. The fish has been on ice for over 24 hours, the most he can get for it is $3,000.00. He heads to the impound lot to get his car and discovers that the mayor had it crushed.

Keegan heads home to Scarlett and Ben’s house, and cooks them his fish on the grill. While they are enjoying dinner, Roy pays him a visit. Roy has come to collect Victor’s $59,000.00, but when he sees the tuna on the grill he sits down for dinner with them.