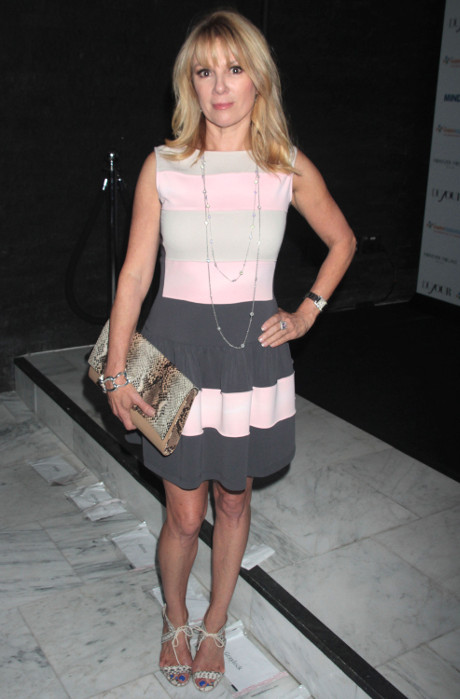 Ramona Singer‘s marriage is imploding and all she can do is grab a glassful of something strong and watch the train wreck. Ramona’s estranged husband, Mario Singer, was living at the couple’s South Hampton mansion when Ramona decided to make an impromptu visit. Upon her arrival, she was met not only with her husband but also with his socialite girlfriend Kasey Dexter.

And, of course, what kind of real housewife would she be if she didn’t offer the police — the ON DUTY police — a drink. Now that’s class. The police wisely turned down the glass of wine and were probably looking at Ramona as if she were some drunken space alien. Word to the wise, Ramona, just because Bravo probably imposes a three drink minimum doesn’t mean the rest of the world can be Intoxicated on the job. It’s not normal.

To make matters worse, after all that hoopla, Ramona reportedly wants Mario back. According to radar online, Ramona is desperate to reconcile with Mario since she depends on him for everything. The couple have been together for quite some time, and the thought of a divorce and starting all over again must make Ramona crazy.

Bravo sure does know how to pick ‘em, right? They always manage to find the most morally bankrupt, criminal, drug-dependent people they can find for those shows. Every day, someone on one of these shows is either getting divorced or indicted. It’s a classic case of which came first, the chicken or the egg? Were the lives of these folks so tragically chaotic prior to joining the cast or did the show create a bicoastal group of monsters? The only person I’m convinced was nuts before she joined the show was Bethenny Frankel; the crazy just wafts off of that chick like the smell of apple pie cooling on the windowsill.

Ramona seems to be in denial about her marriage probably because the thought of being one of the few housewives with a solid marriage is alluring. At some point, however, she needs to scrape up whatever dignity she has left and approach this situation like an adult. If Ramona is in a bad situation, she needs to get out and try not to embarrass herself further in the process. Though, embarrassment is an occupational hazard for a Bravo cast mate; in fact, I wouldn’t be surprised if these ladies are contractually obligated to make complete fools of themselves at least once or twice a month.

According to Brandi, these women make peanuts off of the actual show and not all of them are commercial successes like Bethenny and Teresa. So what do you guys think? Is selling your soul to the devil that is Bravo worth all of the aggravation? Let us know in the comments section!