Ravenswood RECAP 1/14/14: Season 1 Episode 7 “Home is Where the Heart Is (Seriously – Check the Floorboards)” 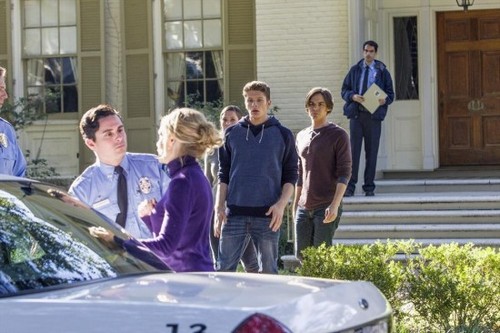 Tonight on the ABC Family the new series RAVENSWOOD returns with a new episode called “Home is Where the Heart Is (Seriously – Check the Floorboards).”  On tonight’s show, Olivia tries to keep it together in the wake of recent happenings.  Did you watch the last episode before the hiatus?  We did and we recapped it for you right here.

On the last episode, fresh off his trip to Rosewood, Caleb struggled to deal with the aftermath of his brief time with Miranda on the other side. Remy realized her dreams may be the best clue they have into understanding the pact, but she unwittingly attracted something that was determined to make sure Remy didn’t wake up. And Miranda decided to haunt Mrs. Grunwald for answers but discovered Grunwald might have a ghostly friend of her own. Meanwhile, Luke and Olivia were unnerved by Collins’ increasing attention towards their mother, and Olivia made a major decision about Dillon, without realizing his true motivations.

On tonight’s show, the Ravenswood Police descend on Luke and Olivia’s house after something with ties to events in both the past and present is unearthed. Caleb’s father decides to find out what his son is up to in Ravenswood, and Caleb is unsure if he wants his help, or if he wants him to get out of town. Remy continues to deal with lingering effects of what she witnessed in her dreams.  Meanwhile, Olivia tries to keep it together in the wake of recent happenings, and Miranda gains surprising insight into Grunwald and her connection to the supernatural.

We hope you stop by for this new show!  If you are fans of Pretty Little Liars, I’m sure you’ll enjoy it.  Make sure to come back here later tonight at 8 PM EST for our recap. What are you most looking forward to this season?

Remy’s father tells her it’s time for bed but she’s still slightly disturbed to fall asleep. She opens her sketchbook and flips through several of the images that she’s noted from her dreams.

Miranda tells Caleb about Ms. Grunwald’s ghostly friend, and how she thinks it’s a “who” not a “what.”

Olivia wakes up to police activity in her home. They’re searching their house because they’ve received a new warrant to do so. Someone dug up a three sided blade in their garden. Their father was supposedly killed by a knife of this type.

Meanwhile, Caleb’s father comes to visit. He asks if something happened with him and Hannah, but Caleb says it’s complicated. He interrogates him more, asking why exactly he’s in Ravenswood. Apparently, Caleb’s father is in town because he’s next of kin to the old Henry Rivers descendant that died at the nursing home.

Remy wakes up to a text from Luke. It says “Cops are here now.” When she gets out of bed, she sees a floor of sketches. Not only are they on her bedroom floor but they’re posted all over her house. Her father comes down with a look of confusion on his face.

Caleb arrives at Luke and Olivia’s. He shows them the picture of the knife Remy drew from memory. The blade she drew — and the one the cops unburied — is from 1917. At the house, Caleb notices the guy who used to work for Collins watching on. His name is Springer. The cops take Luke and Olivia’s mother in for questioning. Luke throws a fit, screaming at the cops for “hurting his mother,” and he’s taken down to the station as well.

Luke sits in jail, trying to simmer down. The cop questions him about the knife and wants to know if he has any information. The cop says that it’s being tested and, soon, they’ll know if it was used to kill his father. There’s a man in the cell beside Luke and he says a very peculiar thing. He says that he’s going to “Wish he was dead before this is all over.”

Olivia is on the phone with Dillon and says that she wants to see him. There’s a knock at the door. She thinks it’s Dillon but it’s actually Mr. Collins.

Meanwhile, Miranda searches the house for Grunwald. She finds Grunwald sleeping. There’s a ghost woman watching over her and when she notices Miranda snooping she pushes her out of the way. This is the same mysterious energy that attacked Miranda last episode.

Olivia talks with Collins. She doesn’t understand why her mother would call Collins to have him check up on her. She’s clearly mad at him and, sort of, accuses him of planting the knife at their house.

Remy looks over her drawings with Miranda and Remy’s convinced that the “hauntings”are mad that she saw the pact being made all those years ago. Miranda thinks that they need to identify who Grunwald’s guardian spirit is. They do some research online and discover that the spirit might be Grunwald’s sister — who’s also being trapped in the town by the pact. They think that, if this is true, Grunwald probably wants the pact broken as much as they do.

Remy’s parents are worried about her mental health and have made her an appointment with a new doctor.

Caleb and his father visit the new house they’ve inherited. Caleb gets angry with his father when he starts talking about how he wants to “put down roots” in Ravenswood.

Beatrice shows up. She’s angry. Miranda finds a picture of Beatrice and a baby — but Beatrice shouts, “Don’t look at that!”

Miranda confronts Beatrice again — this time with the truth: she’s actually Grunwald’s mother. Miranda asks her to help her break the curse, but B is furious and tells her no, that she doesn’t know what she’d be asking for.

Grunwald visits Collins. She asks if he talked to Olivia and Luke. Grunwald says, “They don’t hate you. They just don’t know you.” Collins says that he saw Springer — and that he looks like he’s “drowning, finally starting to realize what he’s gotten himself into.” Grunwald asks what he might do and Collins says, “Something someone’s probably going to have to clean up.”

Olivia returns home and finds her Mom back from the police station. Mom reveals that Collins brought her home from the station. Olivia is just really pissed — because she hates Raymond’s guts. But her mother has an unwavering trust of Collins — and she seems to know more (about everything) than she’s leading everyone to believe.

Olivia is walking down the sidewalk when Springer jumps out of the bushes and begins following her. He tells her that she needs to know what’s going on, that she needs to know what her boyfriend is — and what he’s capable of. He says that everything is her father’s fault and that if her father just would’ve done “right” by his father [Springer’s father] then none of this craziness would be happening. Olivia doesn’t want to hear any of this and runs away from him. Springer chases after her, across the street, but a car hits him. He’s in bad shape. The person who hit him is Tess, Olivia’s best friend.

Remy heads to the hospital after her terrifying sleepwalking ordeal.

Miranda is reading some scripture online. Beatrice appears and notices the glass jar filled with Miranda’s hair. “Do you know what this is? Do you know what happens if you break it?” she asks. Miranda nods. She knows what’ll happen. “You only got a taste of it last time. LEAVE US ALONE!”

That’s the end of the episode. Tune in next week for another intense show!