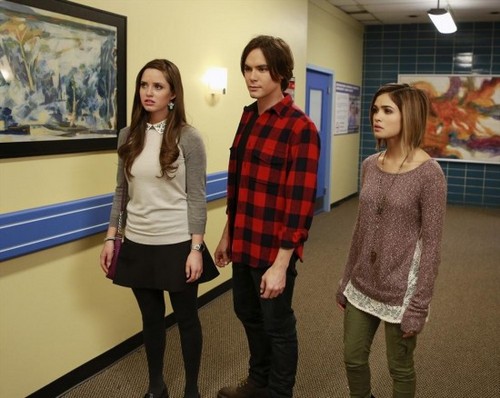 Tonight on the ABC Family the new series RAVENSWOOD returns with a new episode called “I’ll Sleep When I’m Dead.”  On tonight’s show, Remy’s increasingly terrifying dreams send her to a sleep clinic.  Did you watch the last episode?  We did and we recapped it for you right here.

On the last episode, the Ravenswood Police descended on Luke and Olivia’s house after something with ties to events in both the past and present was unearthed. Caleb’s father decided to find out what his son was up to in Ravenswood, and Caleb was unsure if he wanted his help or if he wanted him to get out of town. Remy continued to deal with lingering effects of what she witnessed in her dreams.  Meanwhile, Olivia tried to keep it together in the wake of recent happenings and Miranda gained surprising insight into Grunwald and her connection to the supernatural.

On tonight’s episode, when Remy goes to a sleep clinic in the hopes of finally getting some rest, she learns her dreams about the mysterious pact may have started before she even realized. However, it soon becomes apparent that the clinic may be the least safe place for Remy to be. Olivia discovers some new information about Springer and starts to wonder if he knows about the pact. And Caleb turns to Mr. Price for a lesson in Ravenswood town history.  Meanwhile, Miranda struggles with her place within the group and discovers new consequences for leaving the Collins house.

We hope you stop by for this new show!  If you are fans of Pretty Little Liars, I’m sure you’ll enjoy it.  Make sure to come back here later tonight at 8 PM EST for our recap. What are you most looking forward to this season?

The show opens with Miranda staring at the glass jar of her hair — the thing binding her to the Collins Estate. Caleb comes in asking if she’s planning on opening it, and she says, “Of course.” Caleb says that’s not such a good idea but Miranda isn’t ready to listen and remain cooped up in the house.

Meanwhile, Remy and Luke are at the hospital. Remy’s checking herself into a sleep clinic.

Olivia tries to reach out to Dillon but he doesn’t answer. At the coffee shop, Olivia talks with Tess about what happened to Springer and she thinks he might know something more.

Caleb takes the jar of hair to show Collins. He threatens him and says that if one more thing happens to someone he loves then . . . . Collins interrupts, saying, “I don’t respond to idle threats!” Miranda is there. She gets angry and explodes a glass vase.

Remy and her father meet with a sleep doctor, who tells Remy that her sleep disorders now might be related to the sleep troubles (particularly the nightmares) she had when she was a little girl. Apparently, Remy was treated for sleep walking and night terrors when she was younger. Remy talks with Luke about this new revelation.

Olivia admits to Luke that she thinks Springer was trying to tell her something important and that maybe he feels guilty about something. Tess and Olivia go to visit Springer but his mother is in the room and freaks out that Olivia is there. Olivia can’t understand why Springer’s mother would be so vile and disgusted with her. Remy’s father reveals to Olivia that her father was the DA prior to becoming the mayor and was responsible for putting Springer’s father in jail. “You don’t become a politician without making enemies along the way,” says Remy’s father.

Remy prepares for her sleep study.

Miranda is preparing to walk out of the cemetery. Caleb wants her to promise him that if she sees anything weird or strange that she’ll let him know. Caleb opens the jar and, as he does so, the ravens start cawing aggressively. She manages to walk free.

In the sleeping room, Remy wakes up from her nap. She takes the wires off her head and gets up. She opens the door — only she opens the door not to the hospital but to her room as a child. Old Remy sees Child Remy sleeping. She’s in a dream. The man with the knife enters. The man lifts the blade over Child Remy but Old Remy shouts, “Get away from her!” The man disappears. A second passes before the man grabs Old Remy by the neck. Remy wakes up and the nurse — a young guy who likes flirting with Remy — walks in.

Meanwhile, Olivia tries to get closer to Springer. She manages to gain access to his room, even though she’s not allowed to be there. She finds his phone in his bag of belongings. Conveniently, there’s an audio file on his phone that says, “I did it. I planted the knife. Isn’t that enough?”

Caleb and Olivia chat in the coffee shop. Olivia shows Caleb the audio file and Caleb puts it on a flashdrive to check out later. Miranda has a horrifying vision of their car crash.

Remy talks with Luke about her nightmare — and her “boogeyman.” Luke says that she needs to be careful, both in the dream world and the waking world.

Caleb and Miranda do some digging for a mysterious book — The Unseen Forces — that might contain some answers regarding their ghost and pact questions. They sneak into Mr. Price’s office. Mr. Price is a history teacher at the local high school. This teacher seems a bit shady and clearly knows something about both the history of the town and the history of supernatural forces weaving throughout Ravenswood.

Olivia returns to the hospital. Tess is there too. They see Collins leave Springer’s room. As he leaves the hospital, Springer codes/goes into cardiac arrest.

Meanwhile, Remy prepares for another sleep study. This time, the doc gives her some medication to help her sleep — but she’ll still be able to dream. “Because what good is sleep without dreams?” says the doc. Remy falls asleep.

There’s a creepy clown in her bedroom. The “boogeyman” jumps on her.

In the waking world, she’s flailing in the bed and Luke, watching the monitors alongside the doc, rushes into the room to help her. The doc calls security. Next, Remy’s dad come in and asks what’s wrong. “Nothing. She’s not in distress,” says the doc. “She’s simply in a deeper stage of sleep.”

Back in dream land, Remy has a tea time with the “boogeyman,” the priest that was partly responsible for drafting up the pact. He shows his face.

Caleb and Miranda are mad that they didn’t get the book from Mr. Price, who wouldn’t let them take it home. Miranda is saddened by the fact that she’s not taking well to the outside world. She also gets mad at Caleb, saying that he “doesn’t have to continue playing house” with her. Caleb gets a phone call from Luke. The teapot on the stove starts buzzing. Miranda goes over to the pot and looks into the reflective surface. She says that they need to find Remy immediately.

They go to the hospital. Olivia says that Springer suffered from a bloodclot but that he’s still alive. She also says that Remy is sleeping and she’s not waking up.

Remy asks the man why they were chosen. Are they the smartest? The strongest? The man says it’s certainly not random. Remy asks why he killed Luke’s father with the cursed knife. The man says that he’s just the dealmaker not the murderer — the town does its part. The man says there’s a debt on the books and he always collects. He’s trying to kill Remy in her sleep.

Remy is trapped in the dream world with the man and she’s dying in the real world. The doc tries to save her but she’s going fast.

The man says he’ll answer all sorts of questions, but first he wants to know how she witnessed the pact. Who helped her?

Miranda somehow enters the dream world. She knocks the man in the head with a lamp and says they need to go. Now.

They find their way to a black abyss. Remy jumps into it. She wakes up. The man grabs Miranda. She says, “I might not understand how all this dream hacking works . . . but it’s time you get out of my friend’s head.” She pushes the man into the abyss. They fall. Fall. Fall.

Remy is safe and she’s going home. While they didn’t find out who killed Luke’s dad, they now know that the knife is the tool he uses to make his deals with.

Miranda reunites with Caleb at their house.

Caleb tries to look at the audio file indicating Springer as the person who planted the knife at Olivia’s house, but the file is corrupted.