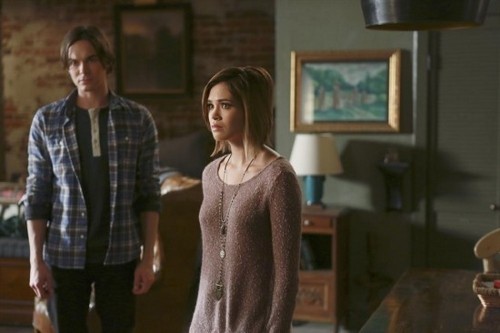 Tonight on the ABC Family the new series RAVENSWOOD returns with a new episode and the season finale called “My Haunted Heart.”  On tonight’s show, Caleb’s ex Hanna shows up in town determined to confront Miranda, and Remy goes missing on the winter finale.   Did you watch the last episode?  We did and we recapped it for you right here.

On the last episode, Mr. Price inadvertently sent Caleb and Miranda on a quest to investigate a secret Collins had been keeping, but it leads them to some startling insight about the pact. With questions about Dillon swirling, Olivia was confused when he finally showed up to help her through her latest crisis. Also, Remy and Luke were determined to prove that Dillon had been hiding something, which put Luke in danger. Meanwhile, Caleb started school in Ravenswood and Miranda tried to keep him company, leading to an awkward incident.

On tonight’s episode, Caleb is thrown for a loop when his Rosewood ex-girlfriend, Hanna, shows up in Ravenswood.  Caleb finally has to clue Hanna in to some of what has been happening in Ravenswood when she shows up demanding to speak to Miranda about “stealing” him away. Luke and Olivia finally learn what really happened to their father and who was responsible. With the walls closing in around him, Dillon makes a drastic move.  And when Remy goes missing, the rest of “The Five” are desperate to rescue her, leading to an intense showdown that puts everyone’s lives in peril.

We hope you stop by for this new show!  If you are fans of Pretty Little Liars, I’m sure you’ll enjoy it. Make sure to come back here later tonight at 9 PM EST for our recap. What are you most looking forward to this season?

The show opens up with Mr. Collins snipping a piece of hair from a recently deceased woman. Grunwald comes in with a cup of coffee and asks if he’s spoken to Springer. She wants to know if he knows what he needs to do. Collins says that he does.

The small girl in the red coat appears to Dillon. Dillon says, “I know what to do, okay?”

Remy, Luke, Olivia, and Caleb are chatting in the coffee shop when Hanna enters. Caleb is very surprised to see her. He introduces her to his friends. H asks where Miranda is.

Remy and Luke discover the boy who appeared to her in the last episode. They find his picture in online archives of old Ravenswood newspapers. Dillon is creeping on them.

Meanwhile, Hanna is hellbent on speaking with Miranda. She wants to know what’s going on. Caleb finally tells her that Miranda is dead.

Remy and Luke identify the ghost she saw as Ryan Atwater.

Hanna has trouble believing Caleb’s explanation regarding Miranda. He tells her everything, that Miranda needs his help with her unfinished business, but Hanna — of course — thinks Caleb’s freaking crazy.

Hanna sits in the coffee shop. Grunwald notices her and says hello. Hanna asks who she can sue in this town for making Caleb crazy. Grunwald says that the veil is thinner here, that even she (alongside the liars) experienced this, and perhaps she shouldn’t be so quick to dismiss Caleb’s claims. Grunwald encourages her to stay for a bit longer and to forget about her past Ravenswood experiences.

Meanwhile, Remy, Olivia, and Luke wonder if the blind ghost Remy’s been seeing can reveal information about their father’s death.

Hanna attempts to reconnect with Caleb. She reveals that she came to fight with Miranda and, after all she’s come to know, she’s now saddened.

Remy, Luke, and Olivia sneak around and find themselves in an office. They ask the ghost if there’s anything they need to see.

Caleb and Hanna are sitting in the park. Caleb leaves to answer the phone. The girl in the red coat comes by and asks if Hanna wants to meet her friend. Hanna agrees. Caleb sees Hanna walking off with the small girl and runs after her. He pulls her away from the girl, who calls herself Max, and tells her “not to look back.” Hanna does turn around . . . only Max has disappeared. Hanna wants to know what’s going on. Caleb says he’ll explain. They leave the park. As they leave, the bruise-faced woman reappears in the spot where Max once stood. (The same woman we saw at the beginning of the previous episode — she was the woman associated with spiders).

Hanna sits in the funeral home. She tries to connect with Miranda by talking to her. Miranda appears behind her. They have a special moment, though Hanna can’t seem to hear Miranda.

Luke, Remy, and Olivia try to summon the ghost in their dad’s office but they don’t have much luck. When they go to leave, the ghost appears, and gives the children a vision. The vision reveals that their father knew about the pact. Dillon walks in and they see Dillon stab their father. O and L are too distraught to fully submerse themselves in the vision, but Remy absorbs every detail. As Dillon runs out of the office, he drops a book and puts it back on the bookshelf. Once the gang returns to reality, Remy goes over to the shelf and grabs the book she saw drop. Inside, she finds Dillon’s thumbprint (in O and L’s father’s blood). How convenient.

They all meet in the coffee shop. They try to find a way to get authorities to search their father’s office again. Olivia admits that she doesn’t want the cops to find Dillon — she wants to kill him.

Remy goes home to look for her father. Dillon is there waiting for her. He says she’s not going to reveal anything. He attacks her, knocks her out, and then drags her body from the house.

Hanna takes a bath. The ghost woman’s spider crawls on the edge of the bathtub. Caleb realizes that Hanna is in the bathtub that he had a strange experience in and tells her to get out immediately.

Caleb gets a text saying that Remy is missing. Caleb confronts Collins and he demands answers. Caleb says that Remy is missing and wants to know what he might know about it. Caleb says, “There’s a direct line between Spring, Dillon, and you.” Caleb thinks Collins knows something. Caleb lets slip that Dillon stabbed the mayor and Collins, who just admitted that his family (who’s protected Ravenswood for years) has never killed anyone, didn’t know that Dillon was responsible for the death of Luke and Olivia’s father.

Collins goes on to reveal his family’s role in the town of Ravenswood: He says that members of his family have always been undertakers; he reveals that it’s been his family’s job to hold the essence of the children of the pact in those jars. He admits that countless people have tried to break the curse . . . only to end up dead. Trying to change things is just not worth it. He admits that he tried to drive Miranda away when she first arrived in Ravenswood because he didn’t want her getting hurt. Miranda appears and politely tells Caleb to leave her uncle alone.

The gang receives a text from Remy’s phone. Caleb identifies the environment from the chapel on the Collins estate.

Dillon walks in. Remy is just coming to on the floor. They try to leave but, just as they do, the chapel’s stain glass window starts flashing and out from the floor rises Abaddon, the man responsible for delivering the pact. He says to Dillon, “Well done, my loyal and faithful servant.”

He tells Miranda that her death “need not be permanent” and that he knows what she really wants. Abaddon starts muttering a strange language and begins bringing Miranda back to life. Dillon runs from the chapel. Max appears behind him. He tells her to shut up. Dillon doesn’t understand why Abaddon turned on him and Max says, “Don’t worry, Dillon. I’m going to help you get away.” They run through the woods. She leads him to the train tracks and, after Dillon trips, she disappears. He’s stuck and, unable to break free, gets run over by a train. Oh my.

Mr. Collins runs into the chapel to stop everything. He reveals that Abaddon is only bringing Miranda back because he needs to kill all of the children together, at the same time, to reap his payment. In attempt to thwart him, Collins smashes one of his glass jars on the floor, and realizes that the only reason why A lured them to the chapel is because he’s too weak to attack them in the real world. This breaking of the jar causes Abaddon to flee the church. The gang wonders “who” Collins released . . . it was Caleb Rivers.

Hanna prepares to leave Ravenswood and Caleb asks her to trust him.

Miranda sits on a bench along. Caleb Rivers (the one who died) runs toward her and asks if it’s really her. They meet in the same place where Caleb asked Miranda to marry him. They look happy together.