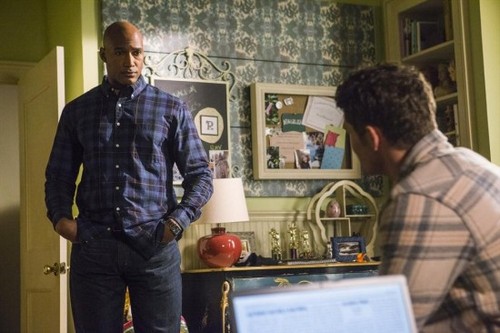 Tonight on the ABC Family the new series RAVENSWOOD returns with a new episode called “Along Came A Spider.”  On tonight’s show, The Ravenswood Police make an arrest for the murder of Luke and Olivia’s father.  Did you watch the last episode?  We did and we recapped it for you right here.

On the last episode, when Remy went to a sleep clinic in the hopes of finally getting some rest, she learned her dreams about the mysterious pact may have started before she even realized. However, it soon became apparent that the clinic might be the least safe place for Remy to be. Olivia discovered some new information about Springer and started to wonder if he knew about the pact. And Caleb turned to Mr. Price for a lesson in Ravenswood town history.  Meanwhile, Miranda struggled with her place within the group and discovered new consequences for leaving the Collins house.

On tonight’s show, Mr. Price inadvertently sends Caleb and Miranda on a quest to investigate a secret Collins has been keeping, but it leads them to some startling insight about the pact. With questions about Dillon swirling, Olivia is confused when he finally shows up to help her through her latest crisis. And Remy and Luke are determined to prove that Dillon has been hiding something, which puts Luke in danger. Meanwhile, Caleb starts school in Ravenswood and Miranda tries to keep him company, leading to an awkward incident.

We hope you stop by for this new show!  If you are fans of Pretty Little Liars, I’m sure you’ll enjoy it.  Make sure to come back here later tonight at 9 PM EST for our recap. What are you most looking forward to this season?

The show opens up at the cemetery. Olivia, Luke, and their mother are visiting their father’s grave site. Mr. Collins has replaced their father’s vandalized gravestone. A detective comes to place Olivia and Luke’s mother under arrests. A strange woman looks on. When they leave, a spider crawls out of her face. She’s of the ghostly variety.

Olivia and Luke argue about Dillon’s whereabouts. As Olivia and Luke wait outside of the police station, Mr. Collins comes out of the precinct. They still suspect him — and they think that Collins put Springer up to burying the knife in O & L’s yard, thus linking their mother to the murder.

Caleb prepares for school in Ravenswood. He has a class taught by Mr. Price, who knows a lot about the town’s history.

O & L talk with their mother. She sends Luke to go get her coat in the car; meanwhile, she tells Olivia to be her brother’s keeper. He doesn’t need to get in trouble with the law. Especially not now.

As Mr. Price’s class finishes up, he tells him that he’d appreciate it if he stopped texting during class. Mr. Price tells Caleb that he’s had some strange dealings with Mr. Collins and that he might want to be careful now that he’s working as Collins’s groundskeeper. He tried to take some pictures of the church on Collins’s estate, but Price tells Caleb that he was chased off. Caleb tells Mr. Price that the church is in disrepair, unsafe, but Mr. Price says that that’s not the truth . . . it’s perfectly fine. What is Mr. Collins hiding in that church?

Dillon shows up on Olivia’s doorstep. He says that he heard about her mom. She asks him where he’s been, but he admits that she won’t believe him. His excuse: he was shipped off to ministry camp after his parents found his condoms. Olivia confronts him about Springer, who alleged that Dillon was the one who told him to bury the knife in their yard.

Remy visits Springer in the hospital. She asks him how he’s feeling. She says that this town has the habit of jumping to conclusions before all the facts are straight. She tries to build a bridge between them, but Springer’s not quick to reveal info about Dillon’s shady ways. She comes up with a solution: she bribes Springer with power — power of media attention — so long as he does something for her in return.

Caleb and Miranda are talking to each other in their home. Caleb proceeds to eat string cheese very awkwardly.

Olivia and Luke have a fight about Dillon. He tells her that he heard Dillon never went away.

Collins and Olivia’s mother chat. He says he’d be willing to mortgage his business for her bail, but she won’t let him do that. He begs her to let him help her.

Meanwhile, Caleb is searching through Collins’s secret office for a key to the chapel. He looks through all the drawers and cupboards but doesn’t have much luck . . . until he finds keys in a small vase. As he’s running out, he has a strange run in with a ghost. The room starts shaking. He sees a strange face in the chemical vases. The ghost knocks over the jars of chemicals, which quickly release fumes into the air. The doors are locked, but Caleb eventually breaks free of the room and runs to safety.

Remy and Luke chat. Luke continues to be upset about Dillon and Olivia; he reveals that he can’t believe that his sister had sex before him. Remy says that she wants to wait until she’s out of high school.

Olivia wants to talk to Caleb at the Collins’s estate, but Miranda appears. She reveals that Collins might not be all bad and that he might be able to help her mother.

Collins is sweeping up the mess that Caleb and the ghost made. Olivia comes in to visit him and she admits, “I need you to help my mother.” She sees a corpse on the table. Its toe moves.

Remy prepares a story to publish in her father’s newspaper about the injustice placed upon Dillon’s father. She shows it to Dillon. In return, she wants answers, and for him to talk to the police. He agrees. He tells her to publish it.

Caleb and Miranda break into the chapel. Miranda sees a large spider crawling on Caleb’s shoulder — but it seems ghostly in nature, as Caleb doesn’t perceive it. But Miranda does. Once they get inside the church, all seems well, except for a strange note that’s illuminated on the stone floor. There are six names listed in the note, “Rivers” being among them.

Remy returns home. Her father is really mad that she published the article behind his back. He fires her from the paper.

Caleb and Miranda tell Olivia about the note they saw on the chapel floor. They tell her that Dillon’s surname was on the floor, and they all wonder why he isn’t “marked.”

Luke walks into the locker room and confronts Dillon. He wants to know how much of this was his fault. Luke gets physical with Dillon, but things get crazy. The shower faucets explode. Dillon says that he’s not in this alone and that it’s not too late for him to make a deal. Dillon reveals that he “got out of the pact” and he’s now “in the clear.” Luke wants to know what this all means.

Dillon leaves. As the steam from the showers grow stronger, Luke is attacked by a strange figure.

Caleb checks out the church again. The strange ghost woman we saw at the beginning of the episode is stalking him. Above the spot where the names are listed there are a swarm of spiders.

Olivia calls Dillon. He doesn’t pick up. She hears a sound in her house — like someone’s sneaking in. Olivia’s mom comes home after she was given help by Collins. Luke’s nowhere to be found.

Remy’s walking home in the dark. A newspaper from the Ravenswood Gazette whips against a white picket fence. She sees a ghost, a young boy.

Luke comes home and tells Remy everything that happened. Luke says that Dillon knew everything, that he was supposed to be in the car that went over the bridge. Luke continues to think that Collins “reouted” the pact to save Dillon’s life.

On her way home, Remy sees Dillon get in the car with Mr. Collins. WHAT A SUPER SHADY MAN!