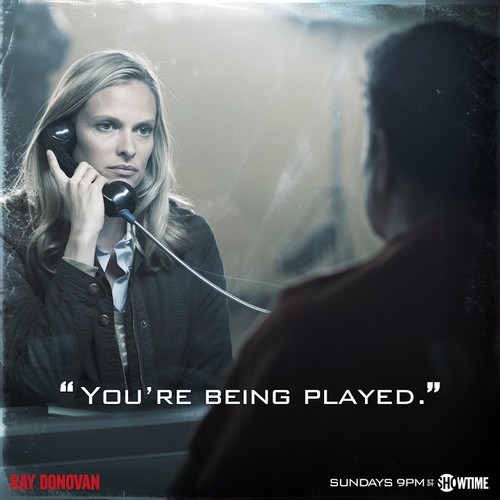 Tonight on Showtime Ann Biderman’s Ray Donovan starring Liev Schreiber returns with an all new Sunday September 14, Season 2 episode 10 called, “Volcheck.”  Kate finds out that she was played.  Meanwhile Cochran is nominated for FBI dictatorship.  Will they find out about his life?

On last week’s episode Ray told Bridget she needed to lie about where she was during the shooting for her own safety; Ray convinced Lee and Ezra to give Cookie the rights to Marvin and Rekon’s music; Mickey made plans to rob a pot store with Shorty; Kate visited a Walpole inmate to find out what went wrong with her article.  Did you watch last week’s episode?  If you want to get caught up before tonight’s episode we happen to have a full and detailed recap, right here for you enjoyment!

On tonight’s show Ashley’s stalker, Bob Lepecka, returns and makes trouble for Steve Knight. Meanwhile, Cochran is officially nominated for the FBI directorship and tries to protect himself from the vetting process; Kate confronts Ray about his past; and Mickey gathers a team for his pot store robbery.

Tonight’s tenth episode of season two looks like it going to be great and you won’t want to miss it. So be sure to tune in for our live coverage of Showtimes’s Ray Donovan tonight at 10PM EST! In the meantime, enjoy a sneak peek of tonight’s episode below.

RECAP: Ray wakes up from sleeping on the couch, he gets up and announces he has to go, he talks about having his wife cheating on him. He isn’t in the mood for anything today. Cookie Brown walks into a house and quietly goes up stairs, Abby wakes up from some sort of nightmare and rushes up to Bridget; thinking that she was killed. It was just a nightmare.

Kate calls Ray and tells him she is sick of his lies; she hangs up right after. Ray asks Avi to find Kate for him fast; he’s pissed at her.

Ray calls someone asking if they are with his father, though he’s told that they have no idea where he is; he offers the man more money if he does his job in keeping his father in check.Mickey is sitting and writing, when Kate comes over to see him; Mickey opens his door and is asked about a guy named Mike. Kate asks what happened to Mickey the night she called him, she knows he lied to her and was scared; Mickey tells her nobody scares him. Mickey tells Kate that Ray is afraid of him and paid Sully to do something; Kate asks what but Mickey tells her to screw off.

Abby drives Bridget to school and mentions she’s not comfortable with it; wanting her daughter to be super careful. Ray gets a call from Avi and is told she is in L.A. and that she rented a car. Ray walks into a room and Cookie Brown asks for some alone time with him, Cookie mentions someone knows that the little kid was killed and wants justice to be served upon them.

Sully comes to check up on Mickey, Mickey tells him to step into his office and says that one night in the future he needs to turn off this surveillance and offers 5 thousand dollars for it.

Abby is at a store and is smoking inside of it; she is told off by one of the employees that she is not allowed to. The girl offers her a make-over and she just accepts it; Abby makes it clear that she doesn’t want to talk at all.

Avi comes in and tells Ray that he’s being stupid; Ray punches Avi in the face and tells him that if they don’t find her because if she prints what she knows they all go to prison. Edward asks for Ray to come over.

Mickey goes to see Terry and tells him to not worry about anything; he asks for Daryll and finds out he’s in the locker room, Daryll asks Mickey what he wants; Mickey tells him about needing 5 thousand dollars and Daryll tell him to screw off. Daryll tells him that he will never trust him on this deal and walks off, Terry tells Mickey that he has the money; though he must be in on the job as well.

Edward closes the door when Ray walks in and lets him hear a message from Kate; he asks what they will do about this. Edward makes it clear Kate has to go now, Ray says no one has to be killed over this.Ray tells Edward he is screwed if he goes after him or Kate. Abby, tells the man she had an affair with that he has to arrest Cookie Brown because he’s a criminal; she knows that he will kill his daughter.

Bridget is at school working on something and is asked if she is going to a funeral, she really doesn’t want to go and feels like she doesn’t want to have her picture taken; a girl asks her if she can go with her and Bridget tells her off.

Abby is at home and opens up a safe with a gun in it, Ray comes home and sees her in the closet and asks where the kids are; she tells them they are at school. Abby says they have to leave, Ray tells her they are not leaving; Abby tells Ray to not touch her and washes her face off. Bridget and Conor come home, saying hello and bye to Ray when he leaves. Mickey takes out five thousand dollars for Sully, letting him know to leave him alone for a bit. Kate walks up to her motel room and Ray is waiting for her outside, Kate asks if he’s going to kill her. Ray tells Kate he lied to her so she can live, he makes it clear that if she doesn’t stop then she is going to die, Ray tells Kate that his dad was supposed to take him to a baseball game but never showed up. Ray starts kissing Kate and the two start having sex; he starts choking her during it and Kate can’t breath at all. Kate throws him off and gets dress fast; running out of the room. Ray just sits there not knowing what to do.

Ray walks to the ocean and takes his clothes off and decides to go swimming in the ocean late at night.