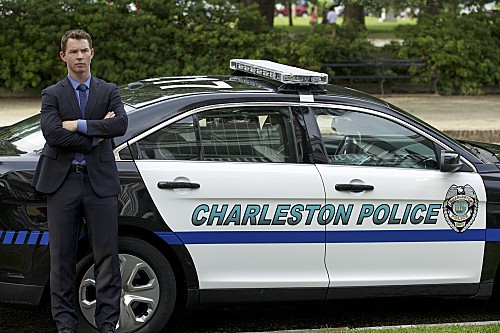 On the last episode when defense attorney Jamie Sawyer was hired by disgraced cop Lee Anne Marcus in the wake of a sex scandal involving the local police department, she found herself facing off against Roy Rayder, the newly appointed City Attorney. Did you watch the last episode? If you missed it we have a full and detailed recap, right here for you.

On tonight’s show when Jamie and Roy take on clients on opposite sides of a heated custody battle, things take an unexpected and violent turn. Meanwhile, Roy struggles with what to do with the missing footage from the police department sex tape.

Preston and Jamie are having sexy time. She gives him a key to her place and he jokes about giving her one as well, but she doesn’t think it’s a joke. #Reckless has started. Roy shows Chief Knox the flash drive he was sent that shows Preston on the tape, while the footage on Terry’s computer had him edited out. Know says Preston is one of his best. He tells him that Lee Anne says she was drugged. Roy says he has to know who sent him the unedited footage. Knox tells Roy to give her some money and ,ake it go away.

He has to go to court for the Benjamin custody case and Knox asks if he’d ever go for custody of his girls but he says he wouldn’t put them through that. The press is out in force for the Benjamin battle and Mrs B says she’s given up her volunteer work to focus on her kids full-time. Jamie comes to chat with Roy and he accuses her of setting up the press circus. Cole is on the stand and says he changed his work to spend time with his son. He says he talks to him every night. He says his ex Cathy has been drinking and doing drugs.

Cathy says she has been clean for eight months and goes to AA meetings twice a week. She says her sister and a baby sitter help on AA nights. She says she always had Marshall because Cole was never around when they were married. Jamie asks Cole if it’s true that Cathy started drinking when he started having an affair with his secretary and she points out Erica, his secretary, and he admits she’s his girlfriend now but says before they weren’t having an affair.

Marshall is there outside the courthouse and speaks to his dad until Cathy says they have to go. Roy watches this with concern. He approaches Cole and he asks if they stand a chance. Roy says he understands because he doesn’t get to see his kids as much as he wants and promises him they’ll fight.

Knox takes the flash drive to the IT guy and says he wants to know who sent the footage. He walks away. The IT guy pops it in and gets to work.

At Cathy’s house, she’s turning off the lights when her place is shot up around her. She ducks and screams and isn’t harmed. Next day, Jamie heads over there. Terry is leading the investigation and says to let Jamie in – he says she’s his favorite Yankee lawyer and she says he’s her least favorite cop and he says with 20 minutes he could change her mind but she says it’s more like five minutes, she heard. Terry says it was an assassination attempt.

Cathy says thankfully Marshall was sleeping over with his cousins. Cole shows up acting distraught. He asks where their son is and she says he’s at Olivia’s. He says he’s getting private security hired for her and Terry asks to talk to him. He asks him to come down to the station. At the Charleston PD, Roy shows up and tells Cole they’re leaving. He asks Terry if he has any evidence. He has none so they leave. Erica shows up and hugs her and he says he would never hurt her. He thinks Cathy is into something that’s causing this problem and says they need to get Marshall out of there.

Lee Anne dresses for her new waitressing gig. She lays down a photo of herself in uniform. Arliss tells her that he doesn’t like the uniform and she says she can take care of herself. He climbs into his wheelchair as he tells her if he runs into Terry, he’ll choke him. She kisses him on the cheek. He asks where she’s going and says she has to go see her lawyer. He asks what they did to her and she says they sent pictures around of her and said things about her and that when she complained, they fired her.

Arliss asks if they asked her for sex or if anyone touched her. She says no and he shouts out that he doesn’t believe her as she walks away. Jamie goes over the merits of her case and says the tape hurts their case since it doesn’t show that she was drugged. She was worried that the tape will be shown and Jamie asks if her husband knows and she tells him that her husband’s injury precludes him from having sex and that makes him insecure. She’s worried what he’ll do if they find out.

Jamie tells her she should watch it to see if she can figure anything out about when it happened. She pops it in and turns the screen so Lee Anne can see. She watches it and then closes the computer. She says she remembers the dress. She says she wore it three months ago when they all went out for Terry’s birthday. Jamie tells Vi they need the missing footage and she tells Jamie they need to contact the PD’s IT guy and she says she can do it.

Dec shows up and tells Roy he told him to keep the Benjamin case out of course and then says no Carolina court will give custody to a father. He says the shooting changes everything and tells Roy to get the case settled. Preston is there and Roy asks him to sit. He says he wants to talk about Lee Anne’s case. He tells him he was sent footage of men that had group sex with Lee Ann and Preston says he’s not in it but Roy says to rethink that answer.

He asks if Jamie knows and if he’ll tell her. Preston says he wants to talk to his union rep first and Roy says if Jamie finds out, she’ll depose him. Terry comes to see the IT guy and asks for security footage of Cathy’s house. He has him freeze some footage and says he sees a car just out of frame. It’s an old Cadillac and says it seems like the guy knows where to park so the cameras can’t see him. They zoom in and see a Kentucky plate.

Terry and the others show up to a cheap motel where the car is parked. They kick in the door and hold the man and woman at gunpoint. He sees cash and a weapon along with photos of Cathy up on the wall so it’s obvious he’s their guy. Terry takes this all in and when they haul the guy out, he tells him – Van Larson, you’re under arrest for the attempted murder of Cathy Benjamin.

Terry has Van in interrogation. He says he sees he has a record in Kentucky and has trouble with skinheads while in jail. He asks who hired him and he says if he can get him level two in jail, he’ll talk. Terry agrees and Van says he got two anonymous calls and that they had an electronic voice disguiser. He says he thought the money could help him start over.

Jamie asks for a suspension of Cole’s visitation until they figure out who did this. Roy pushes for the son to be taken from Cathy until they sort it out. The judge says she agrees with Jamie and Roy gets snippy with her and says that’s what she would think as a woman. She tells him he’s verging on contempt. The judge gives Cole one visit per week and leaves Marshall with Cathy. Jamie tries to talk to Roy but he says he’s sick of her tricks. She says it’s not a trick and says Cole would benefit most from Cathy being hurt. She says his own custody issues are coloring his judgment. He says she’s too blunt and that doesn’t fly in the South. He tells her she doesn’t know him well enough to say something like that to him,

Knox meets with Preston and shows him a print out from the sex tape footage and asks him to explain. He says this could jeopardize their whole operation. Preston says he had to do it to gain their trust and says Knox told him he’d be cut out of the footage. He says he did but that someone sent the original footage to Roy. He tells Preston that he can’t tell Jamie or anyone about his undercover status. He says they can’t let the lawsuit distract him and says they have to stay the course. He tells Preston to stay safe.