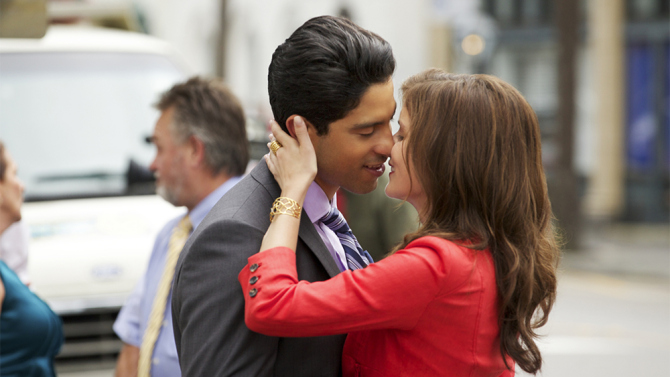 Tonight on CBS their new suspense drama called, RECKLESS airs with their premiere episode called, “Pilot.”  On tonight’s episode courtroom adversaries feel an instant romantic attraction in this legal drama, which begins when the newly appointed City Attorney squares off against a defense lawyer in a sex scandal case involving multiple members of the Charleston Police Department.

For those of you who are not familiar with the show, Reckless is a sultry legal drama set in Charleston, S.C., where a gorgeous Yankee litigator and a charming southern attorney must hide their intense mutual attraction as a police sex scandal threatens to tear the city apart. Jamie Sawyer is enviously cool, confident and armed with south side of Chicago street-smarts as she takes on the good ol’ boys in the South. Her handsome courtroom rival is Roy Rayder, a divorced father of two, embodies the Old South and is the newly minted City Attorney, thanks to his influential former father-in-law, Dec Fortnum.

On tonight’s show when defense attorney Jamie Sawyer is hired by disgraced cop Lee Anne Marcus in the wake of a sex scandal involving the local police department, she finds herself facing off against Roy Rayder, the newly appointed City Attorney.

RECAP: We see a blonde girl in her car getting pulled over by the police, Terry asks for her licence and registration; he tells her she was speeding and asks if she has been drinking. The woman says she’d do anything; the officer tells her to go up against the fence and then he starts doing his thing with her against the fence.

Jamie gets into the courtroom, Roy says she looks beautiful today as always; Terry is back at the office and sits down. He is staring at Lee Anne; Terry is sitting as an informant about a case talking about how a woman was stabbed and had many of her gems and other precious jewelry from her apartment. Roy asks Jaime what she id doing using the ring as evidence, Jamie says the ring fitting the accused man’s girlfriends finger shows off a visual evidence that it was meant for her. Jamie believes the people like to see evidence like that instead of being told things that they have to believes.

Roy walks into an office, and Roy is being offered the job of City Attorney, though he has no firm; though he is offered him to work right there with him.

Jamie talks to her clients girlfriend wondering what Terry was doing to her, the woman says she was fine and that is nothing; Jamie tells her she knows how it is and that she wants to know what’s going on. The woman confesses that Terry is threatening her and her baby; he wants her to accept his requests so that he will help her man on trial.

Jamie comes to see the roomate of the dead victim and they figure Deshawn could not be the murderer, Jamie says they should figure out who did this. Terry looks on his computer and sees a picture of Lee Anne giving him an offensive gesture; Lee Anne tells him they should end this and threatens her with pictures he has. Jamie comes and asks Lee Anne for some pictures of the crime; she notices a ring in the picture that is nothere; Jamie asks about Terry and Lee Anne says he’s the king of dirt bags. Roy gets home and listens to his daughters message they gave him, Jamie calls him later and asks to talk; Jamie says it will take a minute. Jamie is at his door and comes in; Roy is told about how Terry is asking for sex to help Deshawn.

Jamie asks if they can have a beer together, Roy says after they are done with this case that he’s up for it; she says goodbye and that they will see each other in court. Terry goes out to see Lee Anne, he tells her to say nothing about him or what they are doing.

Jamie is at a bar and is approached by Preston; she asks about Terry at the department and he feels like she is just using him. Preston tells her that Terry is a good boy but he has messed up two cases because he’s arrogant; Preston says he doesn’t want to be her inside man. The two are now kissing, and dancing together. Jamie is at home and finds out that the victim of her case was cremated. Lee Anne is called inot the office and is told she is a good officer, though he thinks that she has to go; he says Lee Anne knows why. Lee Anne says she can’t get fired; he tells her she is a bad influence amd that she should not have sent such pictures to fellow officers. She takes off her bade and gun; placing them both on the counter and tells him he will regret this.

Jamie opens up the urn of the ashes of the victim to check what’s inside of it; she starts looking through it to find a ring which was on her finger.Lee Anne goes up to Jamie saying she needs an attorney. Roy at home finds a dvd and watches how Lee Anne was getting together with officers in a sexual manner.

Jamie goes back to see the victims roommate, the boyfriend tells her that she is not there at the moment; Jamie starts looking at the paintings in the stufio and notices how he has a painting.Jamie leaves and really believes that he might be involved in the murder; Roy asks if Jamie is taking on a case about Lee Anee from the police department. Roy invites her over to his place to show her something.

Jamie arrives to Roy’s place and he lets her in this time, Roy turns on the DVD for Jamie showing off Lee Anne and her sexual adventures wit hthe police department; Jamie looks very nervous. Roy notices a cut in the video showing some missing footage that is obviously trying to be hidden, Roy goes out and offers Jamie a beer. Jamie accepts it and confesses watching the video with her was awkward; Jamie sits next to him and tells her how his wife divorced him for a really rich man. Roy asks if Jamie has a boyfriend, Jamie asks why he cares and confirms how she does.

Jamie is pulled over in her car by the police and then she is taken by a bunch of cops; they go to search her car and they found a bunch of dope in her car; she says it’s a set up but they don’t care.

Jamie is in prison and is released on bail by Preston; she is so happy to see him and he takes her to his house. She notices Terry and he gives a slight wink. Jamie brings the ring and finds out that when lit on fire the ring won’t be harmed; the ring starts to melt from the fire and she showes that the ring they have a fixed; Jamie talks about how she knows how the roommate was bringing the gems to a pawnshop. Roy says the case between Deshawn will be dropped since they new evidence proves he had nothing to do with the murder; Roy tells Jamie she did a good job.

Roy offers to give Jamie a ride though she says she has one, Jamie walks off over to Preston; Roy watches them leave together. Jamie tells Lee Anne that there is a tape of her wit hTerry and other officers having sex on a police car; Lee Anne says she could have been slipped in her drink because she has no idea about this happening. Preston confronts Terry telling him to stay away from Jamie, telling him to quit the cocaine scamming or he will personally deal with him. Roy gets a USB that shows that Preston was part of the sex scandal; being the footage that was left out of the DVD.