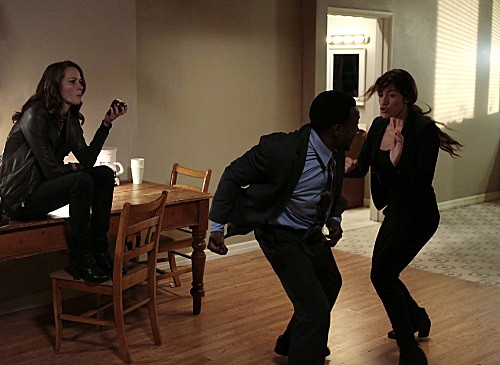 PERSON OF INTEREST comes back for its 6th episode in its third season and we can’t wait to see what happens tonight on the new episode entitled “Mors Praematura.”  On tonight’s show Reese and Finch look for clues as to why a mild-mannered estate investigator’s number has come up.  Did you watch last week’s episode?  We did and we recapped it right here for you!

On last week’s episode when Shaw was tasked to stay close to a 10-year-old identified by The Machine, she grudgingly developed respect for the young girl’s skills in surveillance and realized it could be the very reason why her number has come up. Meanwhile, Carter’s mission to bring the crime organization HR to justice risked exposure.

On tonight’s show freed from her psych ward confinement, Root receives a directive from The Machine that requires Shaw’s assistance – by any means necessary – and takes extreme measures to gain her compliance. Also, Reese and Finch look for clues as to why a mild-mannered estate investigator’s number has come up.  Kirk Acevedo guest stars as Timothy Sloan.

Tonight’s Person of Interest Season 3 Episode 6 is going to be exciting, and you won’t want to miss it. So be sure to tune in for our live coverage of the new episode of Person of Interest — tonight at 9PM EST! While you wait for our recap, hit the comments and let us know how excited you are about the show. Don’t forget to come back at 9PM for our LIVE recap!

The machine was able to pick up Shaw’s attack but with it being best buddies with Root he doesn’t tell Finch about the crime. Although he does get worried when he doesn’t hear from her. He sends Reece to go look for Shaw while he goes undercover on the newest number. He has to watch over a man named Sloane so he attaches himself as a partner in the estate investigator. They have to go through dead people’s items and hopefully find the next closest family member. It means wading through a hoarder’s items in order to find out about her sister.

Reece finds out that Shaw is in trouble. He saw signs of a teaser at her apartment. But he doesn’t know Root isn’t torturing Shaw. She wants to work with her. She told Shaw about her new and intimate relationship with the machine in order to get Shaw to trust her. She needs Shaw to help carry out the machine’s wishes.

Reece is only learning who in fact took Shaw when Finch tells him Sloane is up to something. Sloan went to man’s apartment. A man without family. Finch tried to spy but ended up getting caught out. Sloane wasn’t trying to steal something from the apartment using his job; he knew the guy that died. He was his foster brother. He went to the apartment because he doesn’t believe his former foster brother overdosed. He thinks he was killed and Finch offers to help him.

Things are getting worse. Reece learned from Fusco that Shaw is now working with Root. They stole a medical supply van. While Finch learns Sloan isn’t just being overly emotional. His brother was involved in something messy. Jason, the foster brother, was a hacker. Yet all of his objects containing data were removed from his apartment. Then to top it off his flash drive was microwaved.

They found a mysterious locker Jason had opened up and went to investigate. What they saw was odd. There was computer code written on the storage container’s walls. They were trying to figure what it was when they triggered the alarm system. Luckily Reece saved them from getting set on fire. Afterwards Sloan volunteers to keep helping with the case. He knows how to find things and he really wants to do this for Jason.

Root doesn’t know the machine’s plan. She only learns things about a minute before she’s given orders. She’s mostly along for the enjoyment. That’s why she has Shaw pretend to be an agent and turn her in. Once at the holding site, Shaw does her best with the information Root gave her but she doesn’t know how long she can keep the pretense going.

Later Sloane helps Reece find the clue but was taken in a surprise kidnapping. This happened right around the time Finch was able to fully crack the code. It states that they plan on killing Jason. It seems Jason is still alive and his next door neighbor at the detention center happens to be Root. Jason went to the C.I.A. to help take down his anarchist friends. They had went too far by killing someone. And so the C.I.A faked his death for his “protection”. But his friends know he’s alive and they want to kill before he can testify.

Root is trying to untie Jason’s restraints when the cargo van they’re in gets stopped. She gets him out in time but Jason knows his brother got taken. She calms him down over Sloan and then gives him what he needs to start over and have a new identity. Shaw gets her out trouble when she ran out of bullets and then she knocks her out. Guess she wasn’t over the whole teaser thing from earlier.

Reece saves Sloane although bad guys got away. At least he got to call Jason and speak to him.

Carter has been trying to get her Rookie to notice how dirty HR is. But he was stubborn. It came to point when he had to bury a friend that he realized there is no such thing as loyalty to these people. His real name is Mikhail. HR only hires on guys they know can be loyal while cementing their relationship with the Russian mob. It looks like Carter may have gotten a true ally instead of a reluctant one now.

As for Root, she’s out back into lockdown. Finch has a locked off from all electronics.