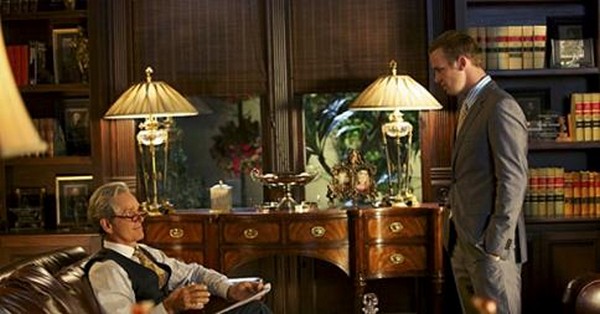 Tonight on CBS their new suspense drama called, RECKLESS airs with another episode called, “When the Smoke Clears.” On tonight’s episode Roy puts his family’s reputation and his position at the law firm on the line when he agrees to defend his high-school sweetheart against murder charges. Meanwhile, Lee Anne tries to end her relationship with Terry for good.

On the last episode, Jamie and Roy found themselves pitted against each other in court when the family of a missing Charleston socialite filed a wrongful death lawsuit against the city. However, things heated up between the legal rivals when they shared a dance at the Mayor’s Ball. Elsewhere, Lee Anne received support from an unlikely ally; at the same time, her case was threatened by another woman making similar claims. Did you watch the last episode? We recapped it all right here for you.

On tonight’s show when Roy agrees to defend his high school sweetheart against murder charges, the case threatens his family’s reputation and his position at the law firm. Meanwhile, Lee Anne tries to break things off with Terry.

Tonight’s episode is going to be great and you won’t want to miss it. So be sure to tune in for our live coverage of CBC’s Reckless tonight at 9 PM EST! While you wait for our recap, hit the comments and let us know if you will be tuning in to Reckless tonight?

Tonight’s episode of Reckless begins with Roy’s old highschool girlfriend Lexi Simms stopping by his office. She just made bail, and is being charged with murdering another hostess at the bar she worked at. Apparently her lawyer tried to hook up with her and she fired him, so she needs Roy to represent her in court tomorrow morning, she says she is desperate, and Roy agrees to help her.

Cruz and Knox meet up, Cruz gives him some intel on a gun shipment of Russian guns. Cruz says with the right time they can take down McCandless and Clint. Knox asks who the buyer is, Cruz says he has been hearing the name “Burnside” tossed around. Knox hands him a cellphone, which is actually a recording device to wear at the transaction, Cruz warns him if they figure out what the recorder is he is “going to get a slug in the head.”

After court Dick corners Roy and orders him to drop Lexi’s case, he tells him that not everything is a conspiracy theory and Lexi is obviously a guilty murderer. Roy refuses to drop the case, Dick informs him that if he embarrasses the firm then he is out.

Roy pays Ashby, the owner of the gentleman’s club where Lexi worked a visit. He demands to have a real list of all of the men at the club the day Tiffany was murdered. The list he gave the cops is clearly fake, half of the men were out of the country that day and one of them was even on life support.

Meanwhile Jamie is prepping LeeAnn for their big day in court, and telling her everything that Roy might say to her or ask her on the stand. Afterwards LeeAnn meets up with Terry in the park, he begs her to leave town with her for two days. LeeAnn insists she can’t leave Arliss, she refuses to be one of those wives that abandon their paraplegic husbands.

Roy finds Ashby smoking a cigar on his front porch. Ashby informs Roy that there is a fine difference between the way things are and the way they should be. He drops a stack of papers on Roy’s lap and tells him he should brush up on the raider family history, and then he leaves.

Vi heads into Jamie’s office and notices the lamp won’t stop flickering. While she is messing with the plug in the outlet she notices a strange cord and follows it up the wall. She finds a spy camera hid on top of Jamie’s book case in her office.

Roy pays Dec a visit and shows him the file that Ashby gave him, it’s an old court case where his mom was charged with embezzlement and his Dad used his power to have Tom Stewart dismiss the case. Dec says he isn’t surprised and he warned him about getting involved with Ashby and the Raven’s Den. Roy thinks that Ashby might have made the entire thing up to blackmail him, and since his Dad and Tom Stewart are dead, only one person would know if it really happened. Roy pays his estranged mom a visit and shows her the file Ashby gave him, he’s shocked when his Mom reveals that the case was real.

[11:02:56 PM] Amanda Austin: Roy’s mom confesses that his dad always made her feel like she wasn’t good enough, so she had an affair with her employer Tom Stewart. Stewart asked her to help him funnel money out of the city accounts, and she agreed. Roy’s Dad agreed to have the charges dismissed, as long as she moved out and left Roy. Roy tells her she had a choice, and he would never abandon his girls the way that she abandoned him.

Roy barges in to Ashby’s office and throws the case file on his chess board, he tells him that he refuses to be blackmailed and he doesn’t care who finds out about his mom. He says he is getting the list one way or another, and if Ashby doesn’t hand it over now he is going to have it published on the front page of the newspaper.

Roy finally gets the list from Ashby, and he sits down with Lexi and they look at all of the customer’s pictures. She finally recognizes a man named Phillip Boyd and says that he was arguing with Tiffany the night that she was murdered. Roy tracks down Phillip Boyd, he’s a VP at Trent Pharmaceuticals. Boyd says that he went in to a room to make a private call because e founds out that their highest selling drug Sylaxyl was being pulled from the market by the FDA, after he hung up he realized Tiffany had overheard the entire conversation. Later that day the stock market went in to a free fall, because someone had leaked info that the FDA was pulling the drug. He was convinced that it was Tiffany and he confronted her about it later.

Jamie heads home after a long day at work, and as she is heading up to bed Cruz shows up on her doorstep. She demands to know what he wants, but he walks in and says he needs to talk to her. He says that he can’t stop thinking about her, some serious operations are going down tomorrow and he just wants her to know that he loves her in case anything happens to him. He tells her that after tomorrow when the smoke clears he will be able to tell her the whole story. He kisses her goodbye and leaves and Jamie stands there looking confused.

Roy feels guilty about how hard he was pressing LeeAnn at the deposition, he tells Dec he owes her an apology and leaves the office to go to her house. When he arrives he is shocked to see Terry and LeeAnn in the back yard in the middle of the night, he hides behind a bush and watches them kiss before Terry leaves.

Roy and Lexi head back to court, and Roy has a theory, he pulls Lexi’s co-worker Kaylee’s bank statement and stock portfolio. She has been buying stocks and selling stocks of company’s owned by men that frequented the Raven’s club and making crazy cash doing it. Kaylee takes the stand and freezes up, confirming that she killed Tiffany because Tiffany figured out she was sharing insides trade secrets. The next day the verdict comes in and Lexi is found “not guilty.”

Vi pays Jamie a visit. Ed the IT guy was able to extract videos off from the camera, and Vi shows her a clip of Terry and LeeAnne making out in her office the night of the Mayor’s Ball, and they see Terry planting the camera on the bookshelf.

At the gun sale all hell breaks loose because the buyer realizes that the cops were tipped off, a shoot-out occurs and Cruz is shot and injured badly, Terry a points a gun at him and demands to know if he has been playing both sides.