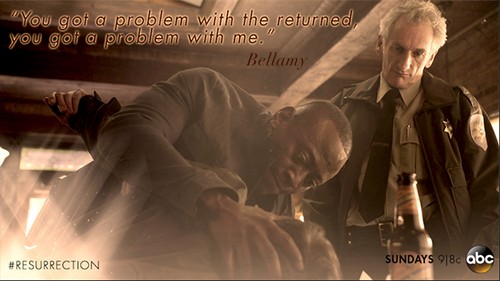 Tonight on ABC Resurrection continues with an all new Sunday November 30, season 2 episode 8 called, “Forsaken,” and we have your weekly recap below.  Tonight, fear and anti-Returned rhetoric rises as the virus spreads; Bellamy [Omar Epps] and Sheriff Fred make every effort to track down the True Living members before they can do any more harm; and Maggie [Devin Kelley] gets closer to finding a cure, but then a kidnapping and a hate crime bring her progress to a halt.

On the last episode, Rachael refused treatment for the virus, fearing for her unborn child. The anti-Returned hate group True Living grew in numbers, including Deputy Carl. Elaine’s brother Ray contracted the virus, despite the fact that he’s living and not Returned. Brian Addison showed more than a passing interest in Margaret. Did you watch the last episode? If you missed it, we have a full and detailed recap right here for you.

On tonight’s episode as per the ABC synopsis, “Pastor Tom’s new church is becoming a refuge for the Returned as fear and anti-Returned rhetoric intensifies. Bellamy and Sheriff Fred are determined to track down the True Living members and stop them from causing any more harm, and Maggie is on the cusp of finding a cure for the virus until the unimaginable happens – a frightening kidnapping and a horrible hate crime brings everything to a grinding halt.”

Tonight’s Resurrection Season 2 episode 8 is going to be exciting, and you won’t want to miss it. So be sure to tune in for our live coverage of Resurrection — tonight at 9 PM EST!

Tonight’s episode of Resurrection begins with Lucille Langston trying to clean the red cross off her front door that the rioters painted because she has someone living with her that came back.  Meanwhile, a woman pays Pastor Tom a visit and says that the red cross on her door upset her children, so she wants someone to take care of her husband – she doesn’t want him living with her anymore.  Elaine is sitting at the hospital, reminiscing with Maggie about when they were growing up.

Bellamy stops at a store where a man is washing the red cross off his door.  Bellamy asks to look at the security camera so he can find out who painted the cross – but the man insists it wasn’t working.  He tells Bellamy he would appreciate it if he just left.

Margaret pays Kyle a visit and reveals that she knows his grandfather was William Kirk and that he burned in a fire at the factory – she knows some people blame that Langston Family for the fire.  She orders him to “stop the deal” and leave her family alone, Maggie knows he has came back to town for revenge.

Bellamy stops by the church where five people have been dropped off and given to Pastor Tom because their families don’t want them anymore, they are afraid that they are going to get a virus from the returned or that someone is targeting their entire family because they left a red cross on the door.

Lucille stops by Maggie’s house and wants to apologize for what she said to Maggie’s mother.  She says she is sorry for her loss and Maggie shouts at her that he mom didn’t deserve the way she was treated.  Lucille leaves a picnic basket and storms out.

Bellamy storms in to Fred’s office and wants to know who is painting the red crosses and reveals that five people were dumped at the church.  Fred says he will talk to somebody about the group, and tells Bellamy to drink a cup of tea and relax.

Maggie has a shocking realization and calls Pastor Tom and Rachel in to the office.  She reveals that the reason that she thinks Rachel was able to beat the virus is because she was pregnant, she wants to take a sample of Rachel’s amniotic fluid to run some tests and use it to help the others who have the virus.  Rachel agrees to do the tests.

Elaine is beating up the vending machine at the hospital and having a meltdown about Ray, she doesn’t understand how he got the virus because he hates the returns and wouldn’t even go near them.  Fred tries to comfort her, and offers her a sandwich.  He asks her if she knows anything about a group called the “True Living” and says they used to meet at Twain’s.

Henry receives a phone call at home from the bank – he reveals that Addison pulled out of the deal.  He is baffled, but Margaret says that he should just let it go and wait for another investor.  She doesn’t let on that she paid him a visit earlier that day.

Rachel goes through with her amnio at the doctor’s office, and then she and Tom head home and talk about baby names.  Rachel bought a stuffed animal at the hospital gift office for the baby, and announces she wants to name him Nathaniel.  She feels the baby kicking and has Tom feel it with his hand.

Maggie and Bellamy head to the hospital, and Maggie gives Ray a shot of the amniotic fluid.  While she is working on him Ray tells her that if he dies he wants to stay dead – and if he comes back she has to tell Elaine not to trust him because it won’t be the real him.

Fred heads back to the police station and tells Bellamy that Jimmy Nolan is apparently the leader of the “True Living,” and he doesn’t think he is dangerous.  They head to the bar to pay Jimmy a visit.  Fred asks him if he painted the red crosses on everyone’s door – Fred embarrasses him and announces in front of all of his friends that he only has one testacle. Jimmy argues with Fred that the returns aren’t natural, Bellamy freaks out on him and slams his head on the table and says that if he has a problem with the returned then he has a problem with him, because he is returned too.  Fred is in shock as Bellamy storms out.  Back at the police station Fred asks Bellamy if Maggie knows he is returned, he reveals she does.

Tom heads to the church, and Janine goes upstairs and wakes up Rachel.  She tells Rachel that she packed a bag for her and Tom wants them to go stay at his sister’s house because of all the anti-return sentiments in town.  Rachel is confused, but agrees to get dressed.

Henry pays Addison a visit, to discuss why he backed out of the factory deal.  He is shocked when Brian’s grandfather emerges from the other room and introduces himself as William Kirk and says he used to work at the Langston factory.  William says his grandson is making a mistake backing out and they should head straight to the bank.  When they arrive the banker informs Henry he needs to put up more collateral – so he decides to remortgage his house.

Fred heads back to the hospital and sees that Elaine went home, Maggie agreed to watch Ray for the night.  Maggie reveals to Fred that Lucille stopped by and tried to apologize but she was hard on her.  Later Maggie calls Lucille and tells her that she can’t take back what she said but she wants them to move forward.

Fred receives an anonymous tip revealing that the True Living group is planning something big – he calls and warns Bellamy, who says he is going to head over to Tom’s church and make sure everything is okay.  Tom heads home and can’t find Jenine or Rachel, but he does find Janine’s creepy pregnancy journal documenting Rachel’s entire pregnancy like it was her own baby.  He calls Janine and tells her to bring Rachel home ASAP.  Rachel hides in the bathroom and calls Tom and says that Janine is acting strange – he says that they need to get her out of there and away from Janine because she is dangerous and upset that Tom is still in love with Rachel.