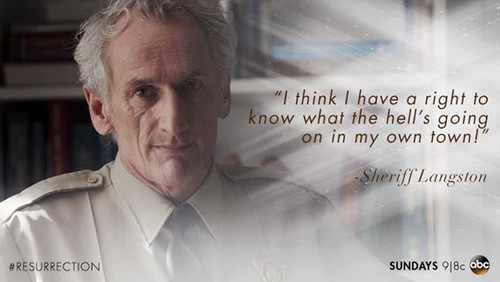 Tonight on ABC Resurrection continues with an all new Sunday November 9, season 2 episode 7 called, “Miracles.” Tonight, Rachael [Kathleen Munroe] refuses treatment for the virus, fearing for the safety of her unborn child; at the same time, Elaine’s [Samaire Armstrong] brother Ray [Travis Young] comes down with the disease. Meanwhile, Deputy Carl throws his support behind the growing anti-returned group, True Living; and Brian Addison takes more than a passing interest in Margaret.

On the last episode, Bellamy, now desperately ill himself, turned to an unexpected source, his shadowy government contact (guest star Donna Murphy) for help and ended up with a shocking revelation about his past. And after another returned disappeared into thin air like Caleb Richards, the living looked for answers. A newcomer to Arcadia (guest star Kyle Secor) made Henry a tantalizing offer. Did you watch the last episode? If you missed it, we have a full and detailed recap right here for you.

On tonight’s episode as per the ABC synopsis, “Rachael refuses treatment for the virus, fearing for her unborn child. The anti-Returned hate group True Living grows in numbers, including Deputy Carl. Elaine’s brother Ray contracts the virus, despite the fact that he’s living and not Returned. Brian Addison shows more than a passing interest in Margaret.”

Tonight’s Resurrection Season 2 episode 7 is going to be exciting, and you won’t want to miss it. So be sure to tune in for our live coverage of Resurrection — tonight at 9 PM EST!

Rachel has been having weird fevered dreams. In them, she sees Margaret and oddly enough she also sees the old factory fire at the Langston’s that had caused several death back in the 1930s. It was such a very vivid dream. And for a second there, Rachel had even thought it was real. But when she had woken up – she had quickly dismissed what she had seen as just a part of her imagination.

However, across town Margaret had woken up from the same dream. And afterwards she asked Jacob if he knew a woman called Rachel!

Rachel has been staying at Maggie’s clinic for a while now. She’s been running a high fever for several days and odds are she won’t survive for much long if it continues. So Maggie told her about the cure Bellamy had brought back with him. And though it’s not a sure thing – it’s still better than the certain death Rachel is facing if she decided not to take the cure.

But so far Rachel is refusing to take serum. Maggie doesn’t know what its effects are and Rachel can’t risk the life of her unborn child on a whim. Hence she’s dragging her feet on taking it and that’s causing Pastor Tom to argue with her. He thinks she should save her own life. Regardless of the cost. And it’s the women in his life that’s fighting him.

His wife is supporting Rachel’s decision and all the while he’s viewing Rachel’s choice to not take the serum as just another way for her to commit suicide. She did it before so he isn’t sure she’s not doing it again as merely using the virus as an excuse!

Speaking of which, there’s been a new case of the virus in town and this time the victim isn’t one of the returned. Elaine’s brother had gotten sick at one his True Living meetings. True Living is a radical new group that’s focused on hating the returned. And it was one of its newest members, Deputy Carl, that was able to catch on to Ray being sick.

When Ray was brought in, Maggie wanted to use the serum on him right away but first she needed confirmation from Bellamy’s contacts that it would be safe using on the living. And as it turns out – it wasn’t. Bellamy was told the serum wouldn’t work on the living. Their immune system was allegedly very different.

So, without reassurance, Ray had to go without. And that meant he only got sicker. Ultimately, he was suffering just as much as Rachel was. But, she at least, had an option at ending her pain. She could take the serum and the only reason she hasn’t is because she fears the repercussions.

Although, Tom and Bellamy were going to ignore Rachel’s wishes and give her the cure anyways. They had waited until she had fallen asleep and then they had tried to act while she was defenseless to stop them. They were going to give her the serum and if Maggie hadn’t stopped them in time – they could very well have hurt her child.

And funny thing is, all Rachel needed was time. She went on to get over the virus naturally and she was back to her old self by the next morning.

It seems that only thing that came out of Rachel’s ordeal is that Bellamy had finally worked up the guts to talk to Maggie about his condition. She had wanted to know why he was so sure the serum would work and so Bellamy told her that he was going to give Rachel some of his “own” supply.

Bellamy is a returned and Maggie was shocked when he told her. She had thought they were good enough friends that Bellamy would have told her his secret the second he had found out about it. But, she hadn’t. So now she’s angry. At him! Everytime Bellamy has had the chance to come clean with her – he had chosen to lie.

And as they were busy living out their little drama, hysteria was slowly taking over the town. True Living’s cause had spread after Ray had gotten sick. With him gone, Deputy Carl had taken over and he changed the direction of the group. He turned what was once a small group of conspiracy theorists into a militaristic group with a grudge.

They later had marked the door of everyone returned still in town and in next week’s promo they’re going to make things very uncomfortable for every returned they can get their hands on.
Yet, they aren’t the biggest threat we have to look forward to. While True Living is worried about all of the returned – there’s one returned that’s holding onto an age-old grudge against the Langston Family. And he might take down other people in the process.