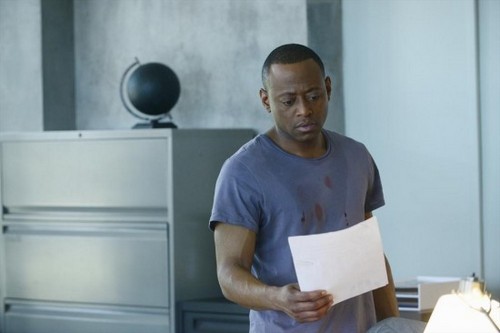 Tonight on ABC Resurrection continues with an all new Sunday November 2, season 2 episode 6 called, “Affliction.” Tonight, a desperately ill Bellamy [Omar Epps] turns to his shadowy government contact for help and ends up learning something shocking about his own past; and the living seek answers after another returned vanishes into thin air. Meanwhile, a newcomer to Arcadia makes Henry an interesting offer.

On the last episode, Barbara made strides in mending her relationship with Fred and Maggie, which only incited Margaret to step up her tactics to stop this. Bellamy’s situation grew more precarious as he struggled to keep his secret from Maggie, while dealing with a strange illness that was spreading amongst the returned leading Bellamy to made some desperate measures. Did you watch the last episode? If you missed it, we have a full and detailed recap right here for you.

On tonight’s episode Bellamy, now desperately ill himself, turns to an unexpected source, his shadowy government contact (guest star Donna Murphy) for help and ends up with a shocking revelation about his past. And after another returned disappears into thin air like Caleb Richards, the living look for answers. A newcomer to Arcadia (guest star Kyle Secor) makes Henry a tantalizing offer.

Tonight’s Resurrection Season 2 episode 6 is going to be exciting, and you won’t want to miss it. So be sure to tune in for our live coverage of Resurrection — tonight at 9 PM EST!

On tonight’s episode of Resurrection, secrets have a way of getting out. And, really, they’re being brought to light at the most inopportune time. The virus affecting the returned is highly contagious. Doctors are even saying it’s a mutated form of the Spanish Flu. So if it’s anything like its closest relative – it can easily become an epidemic.

So far none of the “normal” living people are getting sick but that doesn’t mean they aren’t worried. And there’s only one thing that happens when people begin to panic – things around town get a bit volatile. However Bellamy, the usual voice of reason, isn’t in town at the moment. He had distance himself from his friends after he got sick with the virus.

Which means the only sane people left in a town about to reach the pinnacle of hysteria are people like Margaret and her sons who are simply too afraid of her to demand answers! Last week, Margaret had manipulated events to get rid of her erstwhile daughter-in-law. And Elaine had seen her do it. Though she doesn’t know how it works or what exactly Margaret did.

But Margaret is denying all culpability. She told Maggie that Elaine must have been mistaken. Although, the one person that believes that lie is Henry. Otherwise known as the momma’s boy that was too scared to even defend his own wife against his mother. Fred, Margaret’s other son, knows at least to question his mother’s excuse so after

Maggie came to him crying her eye out over her mother – he vowed to do something.

He chose to challenge his mother’s hold on her family. He pushed her into admitting her true feelings about Barbra’s disappearance yet she never revealed to him what she did to get the other woman to leave. But now they know where each of them stand on what’s best for their family.

Still, Fred is going to need help taking down his mother. Soon he’s going to need Bellamy’s help and that only going to happen when the federal agent finally deigns to come back. Bellamy, who had voluntarily locked himself up in some scary secret government hospital somewhere, went on to do something he wasn’t supposed to. Like breaking quarantine. He that in order to investigate the people he’s working with. And while he was snooping around he ended up finding out information about himself.

He learned that he was actually born in 1936. As the story goes he died when he was six months old and was found years later in 1972 Chicago. The authorities at the time must have thought someone had abandoned their baby. So he was put up for adoption a few months later.

Bellamy’s real name is Robert Thompson and his family were looking for him before the government came in to make a clean sweep. Sadly, though, a reunion was not in the cars. Bellamy parents were one of the first to catch the virus. They disappeared after they became sick but his sister, technical his older sister, was still at the facility. She hadn’t gotten infected and so Bellamy asked to see her.

He didn’t tell her who he was yet at the end of their meeting he knew he wanted to take her out of the facility. And bring her home. Back to Arcadia.

Bellamy couldn’t do it right away so he chose to leave and come back for her at a later date. The first thing he had to concentrate on was getting the doses of whatever it is that saved his life to the other people that needed it. The government hadn’t supplied him a lot (not for every returned in the town) so he gave it to Maggie to use as she deemed necessary.

But even with the virus under control, there’s another danger lurking in the background. Someone is after the Langston family and they use the best person they could have – Henry!