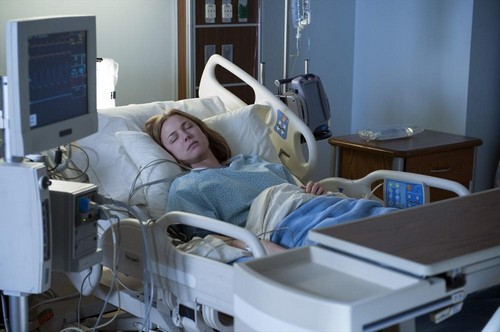 Tonight on ABC’s hit drama REVENGE continues with a new episode called, “Endurance.” On tonight’s show forever changed, Emily fights to come to terms with her new identity.  Did you watch the last episode season 3 episode 11?  If you want to catch up we did and we recapped it here for you!

On last episode before as allies and enemies scrambled to learn what happened the night of Emily’s wedding, the Graysons closed ranks to protect their own. But when everyone’s a suspect, it was only a matter of time before they tore each other apart.

On tonight’s show physically and mentally broken, Emily finds herself more lost than ever while her enemies circle closer. But one game changing revelation will ignite a new path of destruction.

Tonight’s Revenge season 3 episode 12 is going to be exciting, and you won’t want to miss. So be sure to tune in for our live coverage of Revenge — tonight at 9 PM EST!  While you wait for our recap, hit the comments and let us know how excited you are about the new season of the Revenge? Check out a sneak peek video of tonight’s episode below.

Emily Thorne is fully recovered as in, with a little assistance from Jack, she remembers everything. She even recalled Nolan when snuck to visit her. She liked how he passed himself off as a candy striper. In particular the outfit she knew he loved rocking. Nolan takes this to mean she could be back to her normal self any day now and it turned out he was wrong. Emily has had enough with her revenge. She’s tried out and doesn’t want to pursue the takedown anymore. All Emily wants to do is leave the Hamptons.

Which ended up being more difficult than she though. Her plan was to wait until she fully recovered and then leave. Yet when she woke up after a lite nap; she found herself in Grayson Manor. Victoria had her move to the house in case Emily remembered anything and started talking to some random orderly. Daniel was throw when he saw Emily had been discharged. He had just come from visiting Sarah and didn’t want to deal with his wife.

Sarah it seems hadn’t tried to kill herself. She was drunk and slipped in her tub. That’s all she claimed happened and frankly she’s offended Daniel would think otherwise. She told him to go home to Emily and when he kept on insisting he wanted to talk; Jack intervened. He told Daniel to leave as well and pushed him when he tried to put a fight. Victoria saw his black eye after he stopped by the house. She told him to keep his temper under control. It’s vitally important after what he did to Emily.

As for Emily she believes she has help on the inside. The mysterious woman from last week, Nico, was Takedo’s daughter. She never got to meet Emily, but knew her from stories her father used to tell. Nico is supposed to be watching over Emily under Aiden’s orders. The two had become close once she learned her father had died. Although it’s doubtable whether she knows Aiden was the man to kill Takedo.

Patrick is finding out some hard truths. He was helping his mother to get her hands on the mysterious box at Nolan’s house when he learned Victoria lied to him. For some reason he thought he was different than everyone else. He didn’t think he still had to prove himself to her. So learning it was Daniel and not Lydia that shot Emily was hard to take in. Sure, she made her excuses about not wanting to drag him into her mess, but her lies make him think his mother doesn’t trust him and there’s one way he knows for sure to fix this. He arranged for Nolan to forgive him and the two will be having dinner at his place later. If Patrick can get the box for Victoria without having to hire outside parties then maybe she won’t keep secrets.

Nico overheard the conversation between Patrick and Vitoria on the phone and told Emily what the family is planning. Yet Emily didn’t care. She was done with the whole business. Nico tried to motivate her and left when Emily refused to fight. It was similar to when she got a visit form Jack and Carl. He wanted her to push back and she simply didn’t have it in her. All she could think about was when she’ll be leaving and hopefully start a family of her own with Aiden.

Such dreams will sadly never come true. Victoria wanted to be the one to tell her. Because of Emily’s wounds and the surgery that was required afterwards; Emily can’t have children. Victoria explained that could possibly be why Conrad had been a little cold towards Emily. He thought he was getting an heir only to be forever disappointed.

Nico had already left by then. She was meeting with Aiden. He was mad she left Emily alone. Which is only fair, but she was mad that he never mentioned his engagement to Emily. She hadn’t thought he would hide something like that seeing as he made promised to return for her back when they were in Japan.

Patrick had gotten the double infinity box for his mother. All it took was him knocking out Nolan. Nolan realized Patrick was trying to get him drunk and started to switch out his drinks for water. His ploy was revealed and Patrick made sure to get the better of him.

Inside the box, there were documents detailing the lives about the Graysons. They were articles about Daniel and journals about the Graysons habits. Victoria was excited to finally get her hands on evidence. She always knew Emily was a grafter and now she has proof. She couldn’t wait to tell Emily that her days as a privileged Grayson were over. As if that could have ever scared Emily. Soon after Emily held a meet with the press conference at the Manor. She told them how she clearly remembered Lydia shooting her and the family came up a 10 million dollar rewards towards any news leading to Lydia’s capture. The old Emily is back.

Victoria never did get her hands on the real box. Nolan had switched it out at the last minute.

Emily managed to get out of the house. She knew Aiden would come to see her and she wanted to tell him in person. She’s not going to run away with him anymore. She can’t not when she knows the Graysons took away her future. Aiden is hurting and natural he turned to someone to make him feel better. Lucky for him, Nico was willing to take him back without any hesitation.

Emily disappointed three men with her actions. Shhe pushed away Aiden, She made sure Daniel couldn’t away with Sarah, and she let down Jack. Jack really thought she had changed and boy was he wrong.