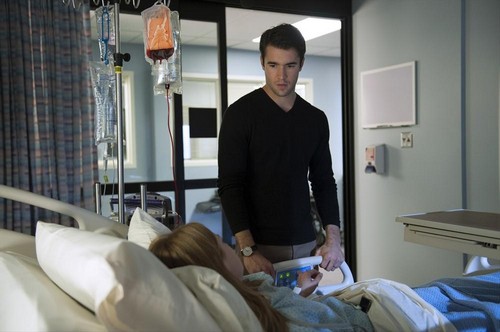 Tonight on ABC after a three week hiatus the hit drama REVENGE continues with a new episode called, “Homecoming.” On tonight’s show suspicions mount and new battle lines are drawn after the shooting of Emily Thorpe.  Did you watch the last episode season 3 episode 10?  If you want to catch up we did and we recapped it here for you!

On last episode before the hiatus the wedding of the century finally arrived and Emily’s master plan was poised to go off without a hitch until enemies united, bringing new complications and leading to dire consequences.

On tonight’s show as allies and enemies scramble to learn what happened the night of Emily’s wedding, the Graysons close ranks to protect their own. But when everyone’s a suspect, it’s only a matter of time before they tear each other apart.

Tonight’s Revenge season 3 episode 11 is going to be exciting, and you won’t want to miss. So be sure to tune in for our live coverage of Revenge — tonight at 9 PM EST!  While you wait for our recap, hit the comments and let us know how excited you are about the new season of the Revenge? Check out a sneak peek video of tonight’s episode below.

The media is reporting on the disappearance of the newlywed Emily Grayson. Seeing the news at home, Nolan believes everything is going according to plan so he’s not worrying himself. Although he will keep up the act in order to get Patrick’s shoulder to cry on. No, it’s everyone else is worried that is all except Daniel who is playing his part in this charade out nicely. The stoic husband hasn’t spoken a word to his family about what really happened. He doesn’t even know yet that Charlotte and Conrad are already starting to suspect Victoria of the deed. Someone shot Emily and the police know it had to be someone on the boat.

Jack and Aiden were worried enough to begin their own search. Luckily there was a tracker both Aiden and Emily knew about. Aiden found the signal but only after Emily rescued herself. She hitched a ride on a boat passing. There Aiden found her and saw how wounded she was. She was conscious at the time and simply wanted to follow through with her plan. She begged Aiden to help her escape, but Aiden couldn’t. He could tell she needs medical help and she did black out. So he left her not but before he made sure to alert the captain to Emily’s presence.

Regrouping with the rest of the guys later, Aiden tells Jack and Nolan what he did. They can’t believe it. Especially Jack. He doesn’t understand why Aiden simply didn’t help her escape. Why are they sticking to the plan after someone nearly killed Emily.

Emily is found alive and taken in to care. The Grayson all appear to be relieved and immediately go in to see her. They learn she’s in good condition despite several blows to the head and the obvious gunshots wounds. They can all eventually go in to see her as long as Victoria doesn’t. The police have notified the medical team that Victoria wasn’t allowed into the room seeing as she is currently the prime suspect. Victoria hates to be singled out like that. She turns to Patrick to comfort her. He is after all the only person she can trust. That was until Nolan arrived at the hospital.

Victoria doesn’t understand what Emily’s plan was but she knows Nolan must have been involved in some way. She refuses to allow him to see his friend and when Nolan asks Patrick to stick up for him; she turns on her boy too! She can’t believe he went against her wishes in order to date Nolan. To her that’s a betrayal.

The only person that was able to speak to Emily was Daniel. He was there when his confused and disoriented wife woke up. He wanted to know what she remembered when he learned she doesn’t recall a thing. Not even her own name. Afterwards Daniel watches her closely without actually going near her. Charlotte thinks that he’s just afraid to be near Emily when her health that fragile. To help him take his mind off of it, she told him about her conversation with the cops. Daniel had a similar conversation however he went out of his way to say his mother was innocent. Charlotte didn’t do the same. She believes their mother was the one to shoot Emily and Daniel is too much of a coward to tell her otherwise.

Margot had a photographer on the boat. It was supposed the honeymoon voyage for a piece in her magazine but she hid the microchip that held incriminating photos. She told Jack she was afraid of what Conrad might do. Yet when they were looking over the photos, Jack points out that Victoria wasn’t the only person missing when Emily got shot. There was someone else.

Victoria is losing control of a life she worked so hard to build. Lydia is basically making her mark on Grayson manor while Victoria is still there. She nearly got into a catfight and all it served was to amuse Conrad. Things are looking and getting worse when Margot finds her. They had become allies of a sort after Margot learned about Conrad. She wanted to Margot there was another person missing when Emily was shot. Lydia wasn’t in any on the photos with the family.

Well, that is just perfect seeing as Daniel finally man up and told his mother he was the culprit. He close to turning himself in when Victoria got such happy news. To add a cherry on top, all she had to do was tell Conrad their son was at risk and even he was willing to throw Lydia to the wolves.

Aiden and Nolan had come up with a plan. They were going to sneak Emily out of the hospital. Aiden showed up ready to be all James Bond to all of sudden realizing something is wrong with Emily. She wasn’t faking her amnesia with Daniel. She honestly doesn’t remember a thing and finding a strange man over her bed isn’t helping. She freaks out and fights Aiden off. He was forced to leave her there once she called in back-up.

The guys don’t know what to do. Nolan hacked into her records and saw that her amnesia was caused by trauma. She made herself forget everything and they don’t know how to get her to remember. Jack thinks he should see her. Maybe that will help. In order to do so he asks for Charlotte’s assistance. Charlotte is extremely troubled when she manages to catch up with Jack. She just came from seeing Emily and had gotten freaked. Emily claimed she remembered her father and that his name was David Clarke. Jack tells her Emily might have gotten her own history confused with Charlotte’s.

Charlotte and Jack arrive at the hospital in the nick of time. Unbeknownst to them someone came close to injecting Emily with something. The assailant’s name is Nico and she’s an old friend/lover of Aiden’s. She swears she came to town to help Aiden, but what was in the syringe?

Back at the hospital, Jack does his best to help Emily. He talks to her and tries to slowly fill her in. Yet he also apologizes. For fighting with her and holding on to his pain for much too long. He gives her Amanda’s necklace. He was going to leave after that when Emily remembered. She remembers it was Daniel that shot her.

Daniel may have been safe when his family threw Lydia into line of fire but he wasn’t grateful enough for his father’s sacrifice. If He gets in trouble again then it won’t be Conrad pulling the strings to keep him out of Jail.

As for Victoria; Patrick has found a way to make nice with mommy. He told her one of Nolan’s secrets.