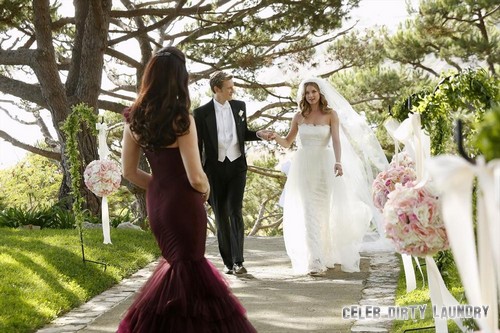 Tonight on ABC after a one week hiatus the hit drama REVENGE continues with a new episode called, “Exodus.” On tonight’s show wedding vows are made, secrets are revealed and Emily’s fate is sealed.  Did you watch the last episode season 3 episode 8?  If you want to catch up we did and we recapped it here for you!

On last week’s show as the wedding of the century quickly approached, Emily put the finishing touches on her final takedown. But the tighter Emily held the Graysons in her grasp, the more they slipped through her fingers.  The episode was written by Joe Fazzio, and directed by Jennifer Getzinger.

On tonight’s show the wedding of the century has finally arrived and Emily’s master plan is poised to go off without a hitch until enemies unite, bringing new complications and leading to dire consequences.

Tonight’s Revenge season 3 episode 10 is going to be exciting, and you won’t want to miss. So be sure to tune in for our live coverage of Revenge — tonight at 9 PM EST!  While you wait for our recap, hit the comments and let us know how excited you are about the new season of the Revenge? Check out a sneak peek video of tonight’s episode below.

The day of the wedding has finally dawned but it’s not a new beginning for anyone. Not when their up to the same old tricks. Emily needs Victoria to be at her wedding. It’s all part of her master plan so she went to Conrad. She told him about Victoria’s declining to come to her special day. She then goes on to help concoct a plan with Conrad to change Victoria’s stance. She gets him to forgive Patrick for trying to kill him. This way with Patrick back as a nice reminder on what does happen when she misses milestones, Victoria would be nice and guilt to accept her invitation.

The plan works and there’s only one minor hitch – she knew this was Emily’s doing. But Patrick made her look past that for now.

Emily’s full plan to setting up Victoria didn’t actually require her getting hurt. She was to spill some of vialed blood on deck and yell out Victoria’s name before jumping overboard. That was a plan but someone changed it without her knowledge.

Emily’s plan to say goodbye to Jack didn’t go the way she planned either. She wanted to say a private goodbye seeing as he won’t be going to the wedding. They had hugged like they used to but things changed when she revealed a secret she was holding back. She told him she was with Amanda when she died. Emily wanted to give him peace with reassuring Amanda didn’t die alone when all he feels is angry. He felt as if she ruined their goodbyes. He knew if she wasn’t leaving then she never would have admitted to being with Amanda. And frankly he is tired of her selfishness. In the end, she cost him way too much.

Lydia’s romantic reunion with Conrad is over. He realized she was close to selling him out to Margot and has decided to end their little dance once and for all. He’s had his fill of manipulative women. Losing him makes Lydia resort to plan B. She uses the old photo she has of Emily to blackmail her. For now, all she wants is her old house back. Emily won’t need it and decides to concede on that point as long as Lydia keeps her secret till the wedding.

In the meantime she’ll have Aiden destroy all evidence against her including Lydia’s one photo. Aiden stopped Lydia from entering the church with a deed to the house.

The wedding in itself was beautiful. The church was full of flowers and light. There were no interruptions or nasty public displays. It truly was the wedding of the year. Now if only it was based on love instead of duty and revenge. Daniel couldn’t wait to call Sarah after the ceremony. She was smart enough not answer the phone.

Nolan has to keep Patrick off the family’s boat when it departs least he ruins the set up with Victoria. Nolan tried seduction but was turned down. It seems Patrick had to make choice between the Emily faction and his mother’s. He went with his mom leaving Nolan no other choice than to use threats. He threatened Patrick with what happened to Father Paul Whitley.

With all the fake romance, Conrad was fooled into being sentimental. He had a quick chat with Margot at the wedding which made him realize Lydia wasn’t going to betray after all. Conrad is a new man with that hindrance out the way. He does more than return to Lydia though. He wants to bring her in the family. Starting by having her on the honeymoon yacht trip with everyone.

The boat trip is going as planned except no one had counted on Sarah trying to kill herself. Daniel was feeling horrible before he heard but afterwards he just can’t stand to have anyone near him. He leaves the carefully planned distraction Emily set up around the same time Lydia joins Victoria. Lydia wanted to give Victoria the photo knowing how much it would make Victoria’s day and possibly amend their rift. The plan was for Victoria to be by herself and thereby not have an alibi but now she does. The one person without an alibi on the boat is Daniel.

Victoria ruined her safety net by confronting Emily. She got Emily to admit to faking her pregnancy right before Aiden quietly drugged her and dragged her away. Emily was thinking everything could continue going to plane but Daniel came upon her. You see he heard how she faked the pregnancy. Seeing the gun right next her; he couldn’t stop himself. Daniel shot Emily and then he callously threw the gun overboard!

Who is going to find Emily? And what will they do with her?