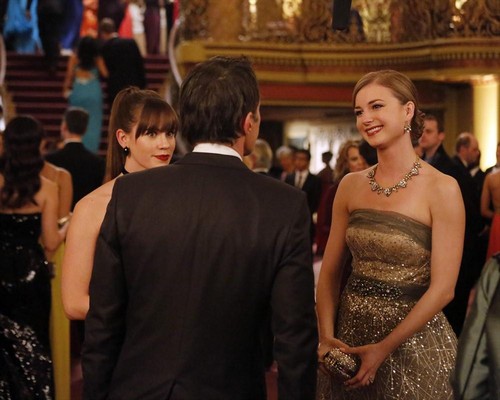 Tonight REVENGE returns to ABC for another exciting episode called “Disgrace.” On tonight’s episode opening night at the opera sets the stage for a devastating revelation.  “Disgrace” was written by Shannon Goss and directed by Matt Shakman.

On the last week’s episode REVENGE returned  and Emily’s blackouts grew increasingly violent, her only hope lied with the person she betrayed most, while Victoria made a drastic move to deal with someone from her past.  Did you catch last week’s episode of Revenge? If not then you’re in luck because we have a detailed recap right here to help you catch up.

On tonight’s episode as the notorious Pascal LeMarchal’s unexpected visit reverberates throughout the Hamptons, Emily and Victoria go head to head in a very public showdown.

Tonight’s episode airs at 10PM EST on ABC and  is bound to be full of all the typical twists and turns that we have come to expect from REVENGE. We’ll be recapping it right here for you but in the meantime feel free to hit up the comments now and tell us your thoughts on the current season.

Tonight’s episode of Revenge begins with Emily and Nolan trying to determine whether or not Stevie Grayson is on their side, and why she visited Emily’s Dad in prison. According to a report Nolan secured she was picked up for a DWI the day later, and that was why she never came back to the prison.

Margaux’s Dad has arrived, and Margeaux reminds him that he is here to fire Grayson from her company. Her Dad tells her to “let him handle it.”

Emily tries to talk to Stevie, but her long lost son Jack intervenes. He tells Emily to “leave Stevie out of it,” and begs her to let him have “just this one thing.”

Grayson and Pasquale head to the club to play tennis, Victoria arrives and reminds Conrad that she got the country club membership in the divorce. Conrad leaves and Pasquale invites Victoria to have lunch with him, she declines.

Margaux pays Jack a visit and reminds him they are going to the Opera, she has even gotten a ticket for his new Mom Stevie.

Emily tracks Conrad down at the bar. She wants to know why Conrad had her “drag Stevie back here.” Conrad explains that it was just a clever way to get back at his ex-wife by making up with his first wife.

At Jack’s house Stevie is paying Grandma and putting Jack’s baby to bed. Jack invites her to go to the Opera tomorrow night with him and Margaux. Stevie sits down and looks at a photo album and gushes about how proud she is of Jack and how she wishes she didn’t miss so much of his life. She confesses to Jack that she met “Amanda’s” father once in prison. Jack admits that Amanda/Emily thought her Dad was an innocent man. He tells Stevie to “drop it.” Stevie looks at a photo of Emily next to a photo of a young Amanda..she might be putting two and two together.

Victoria and Daniel call Emily into the study and show her pictures of Aiden and her kissing. Daniel reveals that their marriage is over, and they plan to offer her a lump sum to make her go away. Emily says she’ll “see them in court” and plans to reveal that Daniel shot her to a judge.

Emily sits down with Nolan and tries to make sense of the latest developments in her marriage. They are interrupted by a knock on the door, Stevie Grayson is standing on her door-step. She tells Emily to tell her “who she really is.” Emily plays dumb and tells Stevie she doesn’t know what she is talking about. Stevie wants to know why she was friends with Amanda, but she is married to a Grayson. Emily confesses that “Amanda was like a sister to her.” Stevie reveals to Emily that she thinks David Clark was innocent, and confesses that she me with him once. According to Stevie Conrad set her up, and faked her DWI results so that she got disbarred.

Nolan finds someone rummaging through his kitchen, an old hacker friend of his who just got out of jail named Javier. Nolan agrees to “let him crash for one day only.”

Victoria sits down with the private investigator that Daniel hired to follow Emily. Pasquale interrupts to bring her a custom Dolce & Gabana dress he had flown in for her to wear to the opera. Victoria accepts the gown, but turns down Pasquale.

The next day Stevie reveals to Jack that she visited Emily. She wants to know why Emily is so loyal to him, and why Jack and Emily don’t want to help her clear David Clarke’s name, since they both cared about Amanda? Stevie reveals that after David was convicted she looked into his case, and there was a “suspicious piece of evidence.” But, when she was disbarred they seized all of her files, and the evidence.

Jack enlists the help of Nolan to help him hack into the firm’s database so that he can find the evidence that Stevie states they seized. Nolan attends a meeting with the patent department to distract the lawyers while Jack sneaks into the archive room. He knows he is looking for something labeled “June 1997,” but he experiences a hiccup when he gets inside the room and none of the files have dates on them. Jack texts Nolan for help and Nolan has his prison friend call Jack and talk him through the codes.

Margaux interrupts Pasquale and Conrad’s meeting. Conrad reveals to Margaux that Pasquale has been fudging the books, and making it look like the magazine is successful, when in actuality the magazine loses about a million dollars a quarter.

Jack brings Emily the evidence he stole from the firm, Emily is annoyed and says it is “her fight not his.” She tells Jack to “stay out of it.”

Daniel catches his Mom in his office and asks what she is going. Victoria reveals that Aiden is out of town, she hired his PI to track him down. Victoria says that she knows Emily is up to something, the reason she turned down the huge settlement is because she is after their family and not their money. She wants Daniel to stay married to her until she figures out what Emily is up to.

Emily curses Nolan out for helping Jack get involved and stealing evidence, and tells Nolan that he better not have “told Javier too much.” Emily shows Nolan a picture on her computer from the evidence they sold, Nolan says “wow, that’s a bombshell.” And Emily adds, “and my next target.”

It’s time for the opera. Emily arrives on Daniel’s arm and smiles for the paparazzi. Pasquale arrives and Charlotte introduces him to Emily. Pasquale excuses himself and tracks down Victoria. Victoria is wearing the dress he got her, but tells him to “keep his distance.” Jack introduces his Mom to Stevie. Margaux asks Pasquale why he hasn’t left yet, and he says he has “unfinished business.”

During the opera Charlotte receives a tip on the magazine’s hot line saying that Emily faked a pregnancy. Emily turns on Daniel, who seems pretty proud of himself, and says “how could you?” Victoria curses Emily out and chases her out of the opera telling her that her “medical records are out there and now everyone will know she faked a pregnancy.” Emily runs out of the opera and the paparazzi swarm her and begin photographing her, apparently they got the tip as well.

The next day Emily packs her bags and Daniel and Victoria serve her the divorce papers, they remind her that the settlement is no longer on the table. After Emily leaves Daniel asks his Mom if she leaked the medical records, and she denies it.

Nolan tries to kick Javier out, but he reveals that he is under house arrest and he gave his parole officer Nolan’s address.

Jack pays Emily a visit after the opera to check on her, but she reassures him that she is okay. Emily reveals that she leaked her own medical records to create a public break form the Grayson’s. Jack wants to know what her new plan is, and what was on the evidence files he stole. Emily reveals that Pasquale is her next target and he was involved in her Dad’s cover-up. Jack plans to help Emily seek revenge on his girlfriend’s Dad Pasquale.