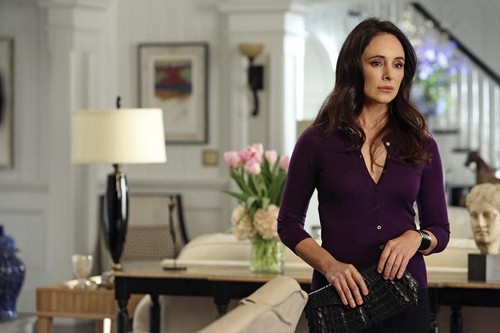 Tonight REVENGE returns to ABC for another exciting episode called “Struggle”. As Emily’s blackouts grow increasingly violent, her only hope lies with the person she betrayed most, while Victoria makes a drastic move to deal with someone from her past. Did you catch last week’s episode of Revenge? If not then you’re in luck because we have a detailed recap right here to help you catch up.

On the last episode REVENGE returned after almost a two month hiatus and episode and Emily’s mysterious blackouts threatened everything and everyone she holds dear, Victoria confronted two formidable ghosts from her past.  Emily didn’t look so good. She broke down and confessed that she was “losing control.”

On tonight’s episode as Emily’s blackouts grow increasingly violent, her only hope lies with the person she betrayed most, while Victoria makes a drastic move to deal with someone from her past

Tonight’s episode airs at 10PM EST on ABC and  is bound to be full of all the typical twists and turns that we have come to expect from REVENGE. We’ll be recapping it live right here for you but in the meantime feel free to hit up the comments now and tell us your thoughts on the current season.

Tonight’s episode of Revenge opens with Jack on the phone with a realtor,k the home that he wanted is considering an “all cash offer” instead of the offer he put in. Stevie arrives wile Jack is getting off the phone, she brought him a box of photos of them in the hospital when he was a baby, after Stevie gave birth to him. Jack has no interest in getting to know Stevie now, regardless of whether he gave birth to him or not.

Meanwhile Patrick crashes a memorial service for Jimmy at a pub, and reveals to a bunch of drunk friend of Jimmy that Jimmy was “nothing but a rapist.” They attack him.

Victoria and Stevie are bickering over which one of them own the house Victoria is living in. Victoria has no intention of giving up her home.

Emily barges into Nolan’s house freaking out, she blacked out again and came to on her porch destroying her father’s Infinity carving with a knife. Nolan tells her not to “let this destroy her.” She storms out and announces she is going to do what she should have done in the first place, “kill them all.”

Victoria heads to the police precinct to bail out Patrick after the brawl at Jimmy’s wake. She warns him to “let it go.”

Nolan tracks down Aiden, and begs him to help Emily. He warns Aiden that Emily is about to do something she will “not come back from…ever.”

Emily heads to South Fork, and lets herself into Conrad’s room. The door beeps, and she realizes someone else is entering the room, she crawls underneath the bed to avoid being caught, and then someone with black gloves on pulls her out by her legs.

Aiden has dragged Emily out of South Fork and tied her up in an abandoned building. He plans to save her from her sub-conscious, by holding her head underwater.

Jack pays Stevie a visit, he just received a phone call from his realtor saying he could have his dream house if he still wanted it. Apparently Stevie contacted the realtor on his behalf, and used her attorney clout to get Jack the house he wanted.

Nolan shows up at Patrick’s house and tells him that he knows he killed his Dad Jimmy. Patrick denies it, but Nolan isn’t buying it. Nolan tells Patrick that he still has a booth at the art exhibit, and he still wants “good things” for him.

Meanwhile, Aiden is still drowning Emily. She finally has a breakthrough, and reveals “her Father is to blame for everything.”

It’s time for the Hampton Art Exhibit. Victoria corers Stevie at the exhibit, and Stevie reveals she plans to turn Grayson Manor into a Halfway House. Victoria plans to argue in court that Grayson Manor is a historical landmark and therefore can’t be used as halfway house.

Emily is crying to Aiden, she blames her father David for where she is now. He told her the night before he was arrested that Victoria, Emily, and him were “going to be a family.” Now, he got his wish, Emily is a Grayson.

Victoria is surprised to see Patrick setting up his artwork at the exhibit, but she is happy that he is getting out and moving on, so she supports him. She reveals to Patrick that she plans to take Stevie down.

Aiden informs Emily that the only mistake his Dad ever made was “falling for the wrong woman.” Emily agrees and declares she is still going to clear her Dad’s name.

Renowned artist Stefano Leone visits Patrick at his booth and is impressed with his art. He offers him an apprentice position at his art studio in Tuscon.

Jack pays Emily a visit at her house, he wants some advice about how to deal with Stevie barging into his life and declaring she was his Mom. Emily reminds Jack that if it is true that Stevie is his Mom, then she is the only parent he has got, and he should at least give her a chance to explain herself. Before Jack leaves Emily thanks him for giving her a chance too.

Patrick texts Victoria’s after the exhibit and reveals he plans to leave the Hamptons. He thinks there is a darkness inside him, inherited from his Father, that makes him do evil things to protect her. He knows that if he goes to Tucson to work with Stefano, he will give his mother something to be proud of.

Jack shows up at Stevie’s room, obviously taking Emily’s advice to heart. Stevie says that she was protecting Jack from herself, apparently when he was born she was a raging alcoholic, but she has been sober for twenty years now. She was in rehab when she found out she was pregnant, and after she gave birth to Jack she couldn’t be a decent Mother. She hasn’t come back to the Hamptons, because the Graysons are “triggers” for her. But, now she is ready to face the Graysons and Jack. Jack invites Stevie to come over to his house tomorrow and officially meet her grandson.

Nolan has a drink with Victoria, it turns out she and Nolan set up Patrick and paid Stefano to offer him an apprenticeship to get him out of the Hamptons.

Daniel has had a private investigator following Emily. The PI brought Daniel photos of Emily and Aiden kissing earlier the day.

Emily is “sprucing up the cottage” and plans to stay there for a while. Nolan brought her a new metal safe to put her father’s journal in. Emily has an epiphany and remembers her Dad writing about a recovering alcoholic lawyer that visited him in prison and said she wanted his case, she never was able to help him because she got disbarred a few days later. Emily realizes that Jack’s Mom Stevie knew her Dad, and now she plans to discover every secret she is hiding.