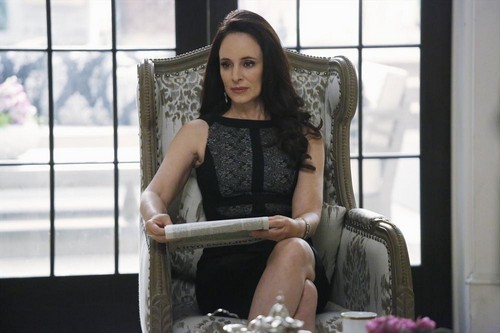 Tonight on ABC’s hit drama REVENGE continues after an almost two-month hiatus with a new episode called,“Payback.” On tonight’s show in-laws scheme and exes return as Emily becomes her own worst enemy.  Did you watch the last episode season 3 episode 12?  If you want to catch up we did and we recapped it here for you!

On last episode In order to make Emily jealous, Daniel reconciled with Sara. Nolan confronted Patrick about his assault and gave him information about his father, leading Patrick to go after Victoria for answers. Emily learned about Aiden and Niko’s relationship and when she blacked out she found herself with Aiden.  After moving out of Grayson Manor, Conrad got revenge over Daniel.  When Emily again blacked out she woke up in a hotel bedroom, when Conrad walked in and hinted that they slept together. A vengeful Niko was sent to Moscow, Russia to kill the man who she believed killed her father, after Nolan falsified evidence to protect Aide.  Meanwhile, Conrad’s ex-wife returns.

On tonight’s episode while Emily’s mysterious blackouts threaten everything and everyone she holds dear, Victoria confronts two formidable ghosts from her past.  Emily doesn’t look so good. She breaks down and confesses that she is “losing control.” Poor Emily, we all knew that several episodes ago. She is in WAY over her head.

Tonight’s Revenge season 3 episode 14 is going to be exciting, and you won’t want to miss. So be sure to tune in for our live coverage of Revenge — tonight at 9 PM EST!  While you wait for our recap, hit the comments and let us know how excited you are about the new season of the Revenge? Check out a sneak peek video of tonight’s episode below.

Tonight’s episode of Revenge opens with Emily going over her test results with her doctor after her cat scan, according to her doctor she is making progress and soon the swelling will go down.

Conrad and Victoria are discussing their divorce, and the maid barges in and says there was a fire at the gallery.

Margaux shows Jack a house and he tells her he plans to buy it, and hopes that she will live with him.

Victoria arrives at the gallery, and finds Patrick in the burnt rubble. A man walks in and says he is a contractor.

Emily arrives at Nolan’s and sees that Aiden has packed his bags, Nolan confirms he is getting ready to leave. Nolan shows Emily the 12 hours of security footage tapes that she asked for. It turns out that Conrad put her to bed and then didn’t come back to the room until 7:00 AM when she woke up. Emily receives a phone call from Stevie Grayson while she is with Nolan, Stevie says she is in town and she is ready to process her divorce.

Emily heads home and Daniel introduces her to Clarissa, the party planner he hired to throw his sister Charlotte’s birthday party. Daniel mentions to Emily that he noticed she didn’t come home the night before.

Emily meets up with Stevie to discuss her divorce, she apparently talked to Stevie the night before on the phone and doesn’t remember anything she said to her. Stevie tells her that since Daniel cheated on her it is grounds for annulment, but Emily tells her she has changed her mind and she is in love with Daniel. Stevie tells her to suit herself and leaves the restaurant, and Emily has a flashback of her making out with Aiden.

Meanwhile Aiden is tied to a pole, and being held hostage.

Conrad pays Stevie a visit at her hotel room and says he wants her back.

Patrick and the contractor, who happens to be his long lost Dad are having a heart to heart at the gallery. Victoria told Patrick that he had raped her and that was how she got pregnant, but according to his Dad Victoria hid the pregnancy from him.

Nolan finds Emily sleeping on the bench on the porch swing. He wakes her up and asks her if “it happened again.” Apparently she passed out and doesn’t remember what she has been doing for the last two days. She tells Nolan the last thing she remembers was meeting Stevie, but he tells her that was two days ago.

The next thing Emily knows she is at Charlotte’s birthday party and has no idea how she got there. She calls Nolan and tells him to call her as soon as he gets the message. Conrad tells Emily “kudos” for calling his ex-wife, and warns Emily if she feels unsafe around Daniel again she can stay in the suite at the Fork.

Margaux tracks down Daniel at the party, and wants to know what his father is up to.

Victoria is less than thrilled to see that the contractor, Brennan has arrived at the party. He wants Victoria to approve his paint choices. He asks her why she keeps staring at him like that, and says that he understands she needs to “keep up appearances.” Victoria insists he is mistaken and they don’t know each other.

Emily finds Nolan and learns that she “hulked out” and broke her cellphone. He says that he tried to stop her from going back into the “lions den” and Emily freaked out on him. Nolan thinks it is strange that Aiden still hasn’t picked up his stuff. Emily finds the sheath to Nico’s sword in one of aiden’s boxes and realizes that Nico figured out that Aiden killed her father.

Emily rushes to save Aiden, as she is untying him Nico appears and they fight. Emily pins her down with the sword, but Aiden won’t let Emily kill her. He tells Nico that her Dad died by the code he lived by and it wasn’t his fault that he killed him. Nico leaves…alive.

Stevie heads to the Stow Away and Jack serves her at the bar, Stevie introduces herself to Jack and Jack realizes she is Conrad’s ex-wife. After Jack takes Carl upstairs to put him to bed Stevie calls and cancels her flight back to Los Angeles.

Victoria pays Patrick a visit at the gallery, and curses him out for not firing the contractor Brennen. While she is telling Patrick that he can’t hire a man that raped her while she was fifteen, Brennen walks in. He realizes that Patrick is his son, and then proceeds to explain that he didn’t rape Victoria, she was willing and able to have sex that night. Victoria tries to storm out but Brennen grabs her arm, Patrick freaks out when he puts his hands on Victoria and grabs him and slams his head off from the concrete. Patrick takes out his cell phone to call 911 while Brennen lays on the floor surrounded by a puddle of blood, but Victoria takes the phone and hangs up.

Aiden sits down with Emily and says he isn’t going to thank her for saving his life, because he wouldn’t have been in danger if she hadn’t planted the sword on him. Emily tries to explain to him that she has been blacking out and hasn’t been herself lately. Aiden reveals that yesterday Emily showed up and threw herself at him and wanted a reconciliation, but Emily doesn’t even remember doing that. He tells her to “get out before she doesn’t something else she regrets.”

Charlotte and Danny are hanging out after her birthday party. Danny confides in Charlotte that he knows Emily and Conrad have been working together. Now that Charlotte is working at their Dad’s office, Danny wants her to spy on him and find out what he is up to.

Victoria and Patrick are back at the house, Brennen died and the coroner rules it as an accidental death after falling from his ladder and bleeding to death. Patrick is distraught though, regardless of what Brennen did or didn’t do to Victoria, he thinks he and his Mom are monsters for standing there and watching him die.

Stevie crashes Victoria and Conrad’s divorce meeting and reveals that she actually owns Victoria’s house, it was left to her in Conrad’s first divorce. She informs Victoria she wants her out by the end of the week.

Emily receives a phone call from her doctor and the doctor informed her that any blackouts she is having has nothing to do with her brain swelling.. Nolan is scared, Emily is the same age that her mother was when her mother started having a psychotic break and tried to drown her. Nolan thinks the same thing may be happening to Emily.

Stevie shows up at the Stow Away again. She asks Jack what Conrad has done to him and Jack tells her it is none of her business. Stevie disagrees, it is her business, because Jack is her son…