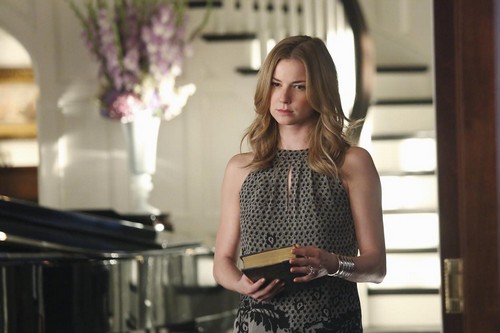 Tonight on ABC’s hit drama REVENGE continues with a new episode called, “Hatred.” On tonight’s show Emily jeopardizes everything as she realizes what it means.  Did you watch the last episode season 3 episode 12?  If you want to catch up we did and we recapped it here for you!

On last episode physically and mentally broken, Emily found herself more lost than ever while her enemies circled closer. But one game changing revelation ignites a new path of destruction.

On tonight’s show with tension between Emily and Daniel at an all time high, Emily makes it clear she is not giving up. However, her own instability could put everything she has worked for at risk.

Tonight’s Revenge season 3 episode 13 is going to be exciting, and you won’t want to miss. So be sure to tune in for our live coverage of Revenge — tonight at 9 PM EST!  While you wait for our recap, hit the comments and let us know how excited you are about the new season of the Revenge? Check out a sneak peek video of tonight’s episode below.

In tonight’s episode, Emily has a new lease on life so to speak. Before all her revenge plans were merely focusing on Victoria’s takedown. Now mother and on will go down in flame together. Emily hate Daniel for taking away her future and she’s going to use their marriage to make his life a living hell. The first thing she had to concern herself with was getting better. She needed to heal faster than what it would usually take. So she made Nico cauterize her as in she had a hot poker pressed against her wound so it would heal quicker.

All she wants to focus on is how to ruin everyone that’s hurt her. Even she has to throw Conrad under the bus to do it. She showed him much more kindness in the last few days than everyone else in his family. It seems he’s leaving Grayson Manor. After he lost Lydia he doesn’t want to bother playing happy families with anyone at the moment. Although he does tells Emily that once Daniel disappoints her, as he’s bound to do, then she can come find him.

Conrad is leaving the family home, but he’s making sure he has the money he needs to live in style. He’s suing Margot and Daniel’s magazine for damages after Voulez accused him of supplying the gun to Lydia in the day Emily was shot. Margot never wrote that sentence and neither did Daniel. That’s why they figured it must be Conrad. Daniel had went head to head with his father and told the older man to “bring it”.

Daniel really should be careful about the people he brings down with them. Take Sarah for instance. He made sure Emily caught him in bed with her. And after hearing about it, Victoria warned him not to poke the bear. She said it was fine to treat Emily however way he wished if he hadn’t brought Sarah into their mess.

Victoria is constantly running after her sons trying to get them to see sense. Too bad for her they never take her sound advice. Patrick learned who his father was from Nolan and wanted to meet the man. Victoria told him that she couldn’t allow that. His father wasn’t a good man and never deserved to be a father. But Patrick has to meet him. He heard the man had come to the orphanage where he was before he got adopted. His father was refused admittance based off of Victoria’s request. And with the life he had with his adoptive parents, learning he was wanted mean so much to him. It’s why he’s dragging along Victoria to help identify his father off a long list of men with the same name.

Daniel didn’t listen to his mother and make nice. Instead he fired the whole staff. He told Emily he couldn’t trust them with discretion because of her threats. He did it to upset Emily and make her feel guilty about people who’ve been at the house for the last 25 years were not jobless. Nevertheless Emily is made of sterner stuff than that. She wrote out a check to the former staff with interest.

It was while she was writing the checks that Nolan ran into her. He wanted to see if she was ok although he didn’t mean to drop the Nico/Aiden bomb on her. What Daniel does can’t hurt her. It’s when Aiden, a man she was actually in love with, moves on so soon after the engagement that manages to leave her disorientated. Emily had a black-out. One second she was swimming and the next she was at Nolan’s. She was confused why and how she got there.

Conrad agrees not to sue the magazine as long as he got shares and his son was ousted. Daniel wasn’t going to agree but it’s technically not his magazine. Margot accept Conrad’s offer. She’s not going to sacrifice herself for Daniel no matter how long they’ve been friends for.

Daniel doesn’t take losing his job as a big hardship though. He sees it as a new opportunity. Now he can leave without anyone holding him back. He tells Sarah they should run away together. Why can’t they start over in Italy?

Patrick did get to see his father and seeing Victoria’s reaction to him; he no longer wishes he had made the trip. Victoria freaked when she saw Jimmy. Patrick literally had to carry her to safety where she finally revealed the truth. Victoria was just a kid when her mother kicked her out of the house. She found a place to stay and Jimmy happened to live down the corridor. He pretended to be a friend until he got her alone. He raped her and even though Victoria ran away he kept following her. When Victoria got the chance to go to Paris she knew her son would be safer at the orphanage than he was with her. It’s what ultimately helped her leaving Patrick behind.

Emily had overheard Daniel and Sarah talking. She decided to pull out the big gun as in telling Sarah’s mother about the happy couple. Sarah’s dad had left their family for someone else so when her mom sees her playing the mistress she vents out her anger on the pair. And when Sarah chooses to stay rather than leave the manor with her mother; she gets disowned.

Sarah didn’t last a night in her new position. She thought about what her mother said and broke it off with Daniel. If Emily’s first swing was that massive then it means Emily was never going to let him go.

Nico isn’t so much helping Emily as she’s passing the time till she learns who killed her father. Nolan is covering for Aiden but for how long?

Something is wrong with Emily. Her blackouts have gotten so bad that she awoke in bed after apparently sleeping with Conrad. What does this mean for her revenge plans?