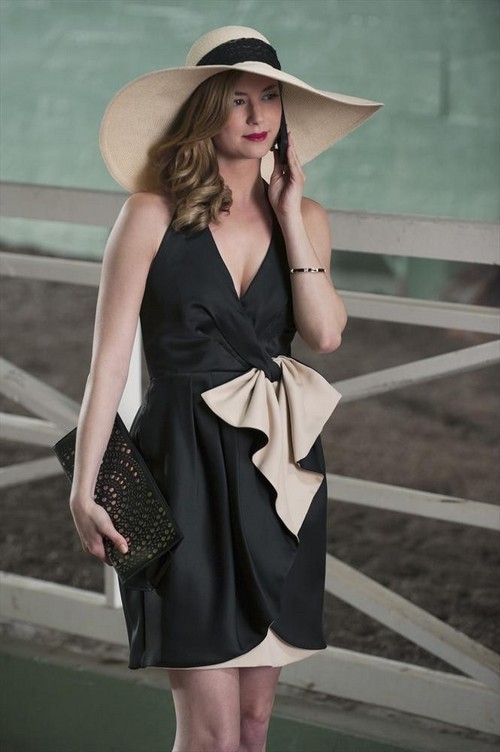 Tonight REVENGE returns to ABC for another exciting episode called,  “Allegiance.”  On it, Victoria is confident Emily will take the bait when she sets a trap for her. Meanwhile, Emily uncovers the identity of one of her dad’s main conspirators.

On tonight’s episode as Emily learns onto the identity of a key conspirator against her father, Victoria sets a trap she knows Emily can’t resist.  A day at the races leads to new revelations and a takedown that may be Emily’s last.  “Allegiance” was written by Ted Sullivan and directed by Jennifer Wilkinison.

Tonight’s episode of Revenge begins at the horse races, where Emily is meeting with Pasquale. Pasquale tells Emily he is ready to take her up on her offer. Emily says there is no reason he should have to buy Grayson secrets from her, he is dating Conrad’s wife and he can tell her any Grayson secrets he wants to hear. Emily tells him that she knows he is playing her and tells him to tell Victoria “nice try.”

Daniel and Margaux are also at the horserace. Daniel shows Margaux Javier’s app design on his tablet and says he plan to take it to her father and use it to get him to go into business with him.

Emily witnesses Victoria arguing with a man named Luke. She accuses Luke of being Conrad’s lapdog. And, she says “it was supposed to be you not David.” He warns Victoria he has evidence he has been holding on to for the last twenty years. Victoria dares him to use it, she would love to see him and Conrad take each other out.

Emily heads back to her house and fills Aiden in on Luke Gilliam, he was Grayson’s top earner. The reason he was never on Emily’s radar before is because her father never wrote about him in his journals. She tells Aiden that Luke has evidence about Flight 197 and he plans to get it from him.

Jack heads to the office to surprise Margaux. He just returned from LA. Margaux says the office is hectic because she is about ot close a huge deal with Daniel. Jack takes her aside, he wants to knows what is going on-she hasn’t talked to him in over a week. Margaux reveals that her Dad Pasquale asked her to take over the entire family business while they are gone. Jack says he wants to catch up with her and spend the night together, Margaux says it isn’t possible, but once the deal is closed she is “all his.”

Conrad pays Victoria a visit and wants to know why she was arguing with Luke. He reminds her that he paid Luke “handsomely” for his silence. Victoria says she could care less she is happy since she started dating Pasquale. Conrad tells Victoria she should ask Pasquale what part he played in her “beloved David’s death.”

Jack heads over to Emily’s house. She is excited to see he is back from LA. He says the Graysons really hurt his Mom Stevie, that’s why he came to see her because he knows she gets it. Emily fills jack in on her latest target – Luke Gilliam, and his oil well business. She has scheduled a meeting with him tomorrow, and she needs Jack’s help. He tells her that he is “all in.”

Nolan meets up with Aiden. He has a lead on Oscar Chapman, the man that faked his death twenty years ago. Nolan says he has located a woman named Brenda that cleaned out Oscar’s bank account for him after he died.

Pasquale arrives at Victoria’s house and she is less than thrilled to see him. She demands to know if he also profited from David’s death. Pasquale says that a reporter came to him and wanted him to publish a story about what happened to David and Flight 197 (Oscar) and Pasquale “silenced him.” But, he did it for Victoria, because he knew if the truth came out it would hurt her.

Emily heads to her meeting with Luke, while he is pitching to her about his gas well business. Jack goes undercover as a crazy man at the restaurant and accuses him of poisoning his family with his gas wells While Jack is distracting Luke, Emily steals a sample from his bag.

Javier heads to a meeting with Margaux and Daniel. Daniel “called in a few favors” and got the terms of his parole lifted. Daniel explains that he is loyal to Nolan and can’t go into business with them. Daniel says he understands and then hands him the keys to a car he bought for him.

Nolan and Aiden track down Brenda. She taisered Nolan and makes a run for it, but Aiden manages to chase her down. When he tackled her, her wig falls off, and they realize that Brenda is Oscar. They head back to Oscar/Brenda’s house with him and he spills the beans. He says that Trevor (Aiden’s Dad) planted a bomb on the plane so that they would free Aiden’s sister. He gave Oscar the entire story and Oscar tried to get it published, but Pasquale shut him down. According to Oscar, Aiden’s Dad Trevor didn’t kill himself, he was murdered by Pasquale.

Charlotte and Javier head back to Grayson Manor. Charlotte pressures Javier to sign with her brother. Javier insists he can’t do that to Nolan. Charlotte teases him and says, “he can either be next to Nolan Ross or be the next Nolan Ross.”

Jack heads to Emily’s house and she hands him a flashdrive. She says it is Luke’s “undoing.”

Pasquale is not happy that Conrad tried to break up him and Victoria. He shows up at his suite and plays part of a recording to Conrad. He recorded all of Conrad’s conversations about Flight 197 and David. He tells Conrad that he now “controls him.”

Daniel has a drink with his Mom, he asks her what Luke’s story is. Victoria reveals that she brought Luke here, and their fight was just for show. It’s part of her ploy to find out how Emily is linked to Flight 197. She is setting Emily up, and she is falling for it hook, line, and sinker.

Javier walks into Nolan’s house and Nolan asks him why the app is gone off the server, he was going to work on it and it is gone. Javier reveals that he is going into business with the Graysons, Nolan is furious and tells Javier that “no on plays him.” Javier scoffs that he just did as he storms out.

Luke heads to the Hampton Environmental Society event and gives a speech about his oil wells. He drinks a test tube of water from towns that already have wells in them. He begins choking and gasping for air because Emily filled the test tube with chemicals. Luke drops to his knees on stage. Victoria watches Emily’s reaction in the audience.

Emily videochats with Luke while he lies in the hospital with his laptop. She tells him that if he doesn’t hand over the evidence he has on Flight 197 she will “make him pay.”

Oliver walks into his apartment and finds Pasquale sitting in the dark waiting for him. Pasquale shoots him in the head and kills him.

Conrad joins Aiden at the bar. He tells Aiden that Pasquale killed Oscar and he is in danger unless he teams up with Conrad and helps him get something he wants from Pasquale. Aiden is obviously upset, he tells Conrad to “go to hell” and storms off.

Emily and Jack cheers to their success for the day, and Jack reveals to Emily that he and Margaux are braking up, then he heads home. Emily takes out her marker and crosses out Luke’s picture on her infamous Grayson Global picture.

Meanwhile, at Grayson Manor Victoria has a similar picture and a marker, she has crossed off all the people that Emily has taken out. She says out loud, “She’s getting revenge…for David.”