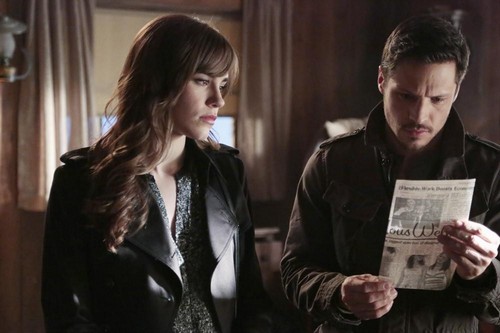 Tonight REVENGE returns to ABC for another exciting episode called, “Revolution.” On this evening’s episode, the Graysons gain leverage, so Emily adopts a new persona to unmask them.

On last week’s episode Emily learned onto the identity of a key conspirator against her father, Victoria set a trap she knows Emily can’t resist. A day at the races lead to new revelations and a takedown that may be Emily’s last.  Did you watch last week’s episode?  If you missed it we have a full and detailed recap, right here for your enjoyment.

On tonight’s episode as all the Graysons slowly gain the upper hand, Emily is forced to take on a new identity to expose them.  Emily zeros in on pascal, leading to a shocking outcome.

Tonight’s episode of Revenge begins with Aiden and Conrad having a secret mission in a parking garage. Conrad wants to know why Aiden is stalling and hasn’t taken out Pascal yet.

At Grayson Manor Pascal proposes to Victoria and asks her to be his wife. She graciously accepts his proposal and he puts a ring on her finger.

Nolan is trying to get Emily to reconsider taking down Conrad at the App Launch, Aiden arrives and says that Conrad gave him an ultimatum-take down Pascal or Conrad exposes him. Emily tells him to take care of it and hands him a gun.

Pascal is walking down the street and masked men jump out of a van and snatch him and put a bag over his head. They take him to an interrogation room and he is shocked to see Emily waiting for him. He sits down at the table with her and she introduces herself as a Homeland Security Agent named Rebecca Stone and tells him to tell her “everything he knows.” She says that she has been under cover for 3 years building a case against the Graysons. Pascal wants his lawyer, but Rebecca/Emily says under the Patriot Act he has no right to an attorney. She makes him hand over her phone.

Charlotte receives an anonymous letter, she is freaked out and shows it to her Mom. She is afraid that David Clark is still alive because the handwriting matches the journals of his she seen. The letter says the “day she became a Clark” was one of the best days of her life. Victoria takes the letter and says it is just a prank and she will destroy it.

Emily, Nolan, and Aiden listen to the recording Pascal has on his phone that he was using to blackmail Conrad. They realize that Pascal was bluffing and the recording has nothing to do with Flight 197.

Conrad pays Victoria a visit, and tries to warn her about Pascal. He says that Pascal murdered Oscar yesterday and the only reason he proposed to her was so that she couldn’t testify against him.

Charlotte surprises Jack at his house. She shows him the letter she received, and reveals she thinks David Clark is still alive. She found three more letters that her Mom had hidden form her. Jack says he thinks he can help her.

Emily is nailing her interrogation rouse. She gives Pascal a wire and tells him to wear it to the Launch party, and get a confession from Conrad. If he does that she will let him leave the country “a free man.”

Pascal heads home and Victoria can tell that he is upset. He says that he has “had it with this country” and first thing tomorrow he is headed back to Paris and she is welcome to join him. He gets in the shower and Victoria finds Emily/Rebecca’s fake business card in his jack pocket. She calls the number and is shocked to hear the recording say “you have reached the Department of Homeland Security.”

Victoria confesses to Daniel that she thinks Pascal is in contact with Homeland Security. She is afraid that he is using her, Daniel insists that he really cares about her and if he has beef with anyone it is Conrad.

Jack has a drink with Nolan and has Nolan track the letters that Charlotte received. He gives Jack a name and address, but Jack refuses to tell him what the letters are for, or from.

Daniel runs to Conrad’s room and warns him that Pascal is “up to something” and he is “Going to make his move at the launch party.” Daniel wants Conrad to lure him to the airport during the party and he is going to have him secretly extradited for “cooking the books.”

Jack and Charlotte arrives at the cabin in the woods where Nolan traced the letters from, where a man named “Kurt Brenner” apparently lives. They snoop around and find stacks of books and articles about Flight 197. Jack convinces Charlotte that the cabin can’t belong to David, because David wouldn’t need to research Flight 197-he knew all about it. Jack picks up a ring off the desk while Charlotte isn’t looking and pockets it and they leave. After they are gone a man comes out of a closet and looks around.

Margaux has learned that Pascalis leaving the country, she questions him about why he is doing so. She is afraid that when he goes home Gideon (her brother) will convince him to change his mind about handing the company over to her. Pascal tells her he will put it in writing naming her the next CEO before he leaves.

It’s time for the My Clone Launch Party. Emily and Nolan arrive, and are in contact with Aiden who is sitting outside in his van listening in on Pascal’s wire. Victoria begs Pascal to leave the party with her and fly out right now, but Pascal informs her he can’t do that and walks off in search of Conrad. Emily congratulates her on her engagement and tells her that she is “finally getting what she deserves.”

Pascal takes the stage and announces that Margaux will be his successor and taking over the company. Margaux and Daniel takes the stage and discuss the My Clone App and then Javier joins them and reveals it on the screen behind him. Of course Nolan sabotaged the App and it turned out to be a disaster in front of the entire party. Daniel yanks Javier off the stage and fires him…they bought the app, they don’t need him anymore.

Pascal deviates from the plan and heads up to the roof with Conrad. Conrad has a chopper there waiting for him and he signals the pilot to turn on the propellers. Emily rushes upstairs to see what Pascal is doing, Victoria follows closely behind her. Pascal is busy trying to get Conrad to confess to Flight 197, Conrad can tell he is up to something and Daniel warned him he was in contact with Homeland Security. While Pascal is in mid-sentence Conrad pushes him in the propellers and kills him, Conrad is sprayed with Pascal’s blood. Emily watches in horror and then slips in to the shadows as Victoria arrives. She drops to her knees and begins screaming, Victor tells his pilot he should call 911.

The police and EMT’s arrive. Victoria is furious that the police won’t arrest Conrad. They believe that Pascal walked into the propeller on accident and Conrad is innocent.

Daniel is comforting Margaux who is shocked and confused about her father’s death. Her phone goes off and Daniel reads the message and tells her that “she is the new CEO.” She doesn’t seem toe excited though, she continues to sob over her father’s death.

Emily is sitting with Aiden rehashing Pascal’s Dad, she is in shock that Conrad just shoved him into the propellers. She declares she is going to “take Conrad down.”

Daniel checks in with Victoria and she is suspicious that he tipped Conrad off about Homeland Security. Daniel insists his Dad probably just had a contact at Homeland Security. Victoria says she will make sure Conrad “burns in hell.” She calls the Homeland Security number again and begins shaking when she hears a recording stating the number has been disconnected.