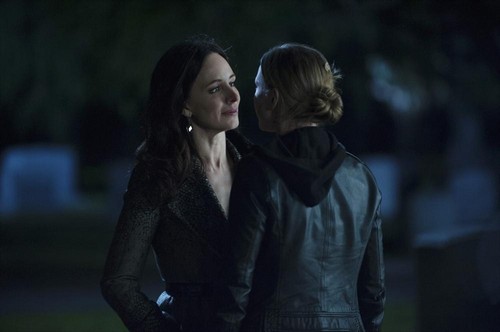 Tonight REVENGE returns to ABC for the season 3 finale episode-called, “Execution.” On this evening’s episode, in the third-season finale, Emily and Victoria wage war one another.

On tonight’s episode Emily goes all in on her mission to avenge her father on the season finale.  Rumor has it someone dies in the finale and from the photos from the episode it looks like Emily is burying someone.  Emily VanCamp said that the season finale is going to be epic and she cried filming it.   “Execution” was written by Sunil Nayar & Joe Fazzio and directed by Ken Fink.

Aiden snaps Emily back to reality and shows her the front page of the newspaper, which features Conrad Grayson’s recent broadcast. Emily tells Aiden that she “loves him”.

Meanwhile Margaux, Daniel, Victoria and a small entourage are transporting Pascal’s coffin to a plane so that he can be flown to Paris for his funeral. Victoria proclaims to Daniel that his father will pay for this.

At court the judge announces to a courtroom and media frenzy that he is denying Conrad bail, and they have officially reopened David Clark’s case. As Conrad is hauled back to his cell the judge promises him that he will get justice, and so will David Clark.

After court Nolan reveals to Aiden, Emily, and Jack that the cabin in the woods where they found David’s ring is actually David’s cabin. The title is in his name, and Emily’s Grandfather left David the cabin. Emily says she will “find out” who the imposter is.

Javier pays Nolan a visit with his tail between the legs, he apologizes to Nolan for not listening to him and losing My Clone, Nolan hints that it’s not over yet.

Margaux officially names Daniel her “second in command” since she is now running her Father’s company. While they are toasting to their new roles in the company, Margaux’s brother Gideon crashes their party and they are shocked to see he isn’t in France.

Conrad’s lawyer sits down with him after court and reveals to him that since the courts reopened David Clark’s case, they have evidence to support the theory that Conrad murdered Pascal to keep him quiet.

Emily heads to the cabin in the woods where Jack found her Dad’s ring, and is jumped by Victoria’s henchman. After a struggle Emily manages to knock him out and escape, she fills Aiden in on what happened.

Gideon and Nolan meet up and make plans to steal back Pascal’s company and My Clone from Daniel and Margaux.

Aiden pays Victoria’s therapist for hire Michelle a visit and informs her that he wants her to give up Victoria. The therapist leaves the room and says she is going to get records that prove Victoria paid her to lock Amanda Clark away, however she is playing him and Victoria is waiting outside the office door. Victoria barges in and confronts Aiden, and Aiden stands up and realizes that the tea that the therapist gave him was poisonous. He stumbles to the ground and Victoria jumps on top of him and smothers him with a pillow until he stops breathing altogether.

Emily heads home after celebrating her Dad’s overturned verdict at the Stowaway and finds Aiden dead on the couch, where Victoria apparently planted his body. As Emily screams Victoria lurks in the shadows and listens in on her agony.

The next day Nolan tries to comfort Emily, and Emily confesses that she “loved him more than she has even loved anybody.” Nolan tells Emily that Aiden told him once in confidence that he “was broken” until he met Emily.

Later Jack and Nolan discuss Aiden’s death. They know that Emily told the cops Aiden’s death was a suicide because Emily is preparing to take Victoria out herself. Jack doesn’t think this is a good idea and he thinks that they need to “protect Emily” before it goes too far.

Emily pays her old therapist Michelle a visit, since she knows that was where Aiden was headed before he was killed. She forces Michelle to watch a video of herself brainwashing Amanda Clark when she was a child and convincing her that her Dad “hurt her,” and was a killer.

Conrad heads into the prison Church and cries. During his prayer he confesses that right now “death would be a luxury.”

Emily heads over to charlotte’s and shows her the ring that Jack found in the cabin. Emily informs her that David was buried with the ring and that means someone must have dug up his grave. Charlotte takes the ring and orders Emily “get out.”

Charlotte confronts Jack and asks him why he told Emily about the cabin in the woods. While Jack is trying to reason with her he puts his hand on her shoulder and Charlotte has a flashback and recognizes Jack’s voice and realizes he is one of the men that kidnapped her.

Gideon goes out for drinks with Daniel and sets him up, he drugs him and puts him in bed naked with a girl he met at the bar. The girl is dead- Gideon paid her in coke and she overdosed. He takes a photo of Daniel sleeping with the dead girl and calls Margaux and tells her to meet him at Daniel’s room. He shows Nolan the photo, and Nolan freaks out – he informs him this “is not how he does business.”

Conrad manages to pay a prison guard to help him escape from jail, dressed as a priest. As he is skipping down the road in the middle of the night, giddy over his newly found freedom, a black van pulls up and a man in a hoodie hops out. He stabs Conrad to death and then removes his hoodie, revealing the he is David Clark.

A detective shows up at the Stowaway and reveals to Jack he has to come in for questioning, Charlotte implemented him in her kidnapping.

Victoria wakes up and realizes she is in a mental hospital, the same mental hospital she had Emily/Amanda locked away in when she was a child. Victoria tells Emily she won’t get away with this, however Emily has forced Victoria’s own therapist Michelle to lie and say she is certifiably crazy. Emily walks out as Victoria screams, “She’s Amanda Clark!” and the doctors strap her arms down and begin pumping her full of sedatives.