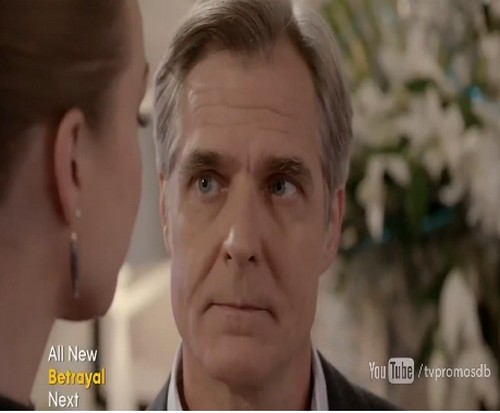 Episode 3.13 of Revenge, “Hatred,” aired on ABC last night and left fans craving more. Unfortunately Season 3 Episode 14 of Revenge, “Payback,” will not air until Sunday, March 9th. So, fans have a month and a half to let the shocking events that transpired in “Hatred” to sink in. When Revenge returns in March the series will pick up where it left off last night, but at a new time. ABC has pushed the series back an hour and starting in March it will air at 10:00 PM, instead of 9:00 PM. March 9th is a long ways away, so while you are waiting you can enjoy our Revenge Episode 3.14 spoiler round-up.

Victoria Grayson sure is persistent. She is still determined to figure out who exactly Emily is, and in the promo for 3.14 “Payback” Victoria is questioning Emily. She asks her “Who are your parents? Where did you come from, and why are you still here?” As if Emily doesn’t have enough to worry about, now she has Detective Victoria hot on her trail.

Emily Is In Trouble

In Revenge 3.14, Emily will be in trouble. When isn’t Emily in trouble? In the promo for “Payback,” Emily doesn’t look so good. She breaks down and confesses that she is “losing control.” Poor Emily, we all knew that several episodes ago. She is in WAY over her head.

So, what is one to do when they feel their enemies closing in on them? Well, if you are Emily Thorn then you just “kill them all.” Since Emily feels like she is “losing control,” her solution is murder. She confides in Nolan that she is thinking about just killing all of her enemies and being done with her “Revengenda.”

Victoria Grayson may not have much time to torment Emily in “Payback.” Conrad’s first wife Stevie is sticking around, and according to the Revenge 3.14 promo, Victoria and Stevie will be going head to head when the series returns in March. It looks like Victoria Grayson has finally met her match!

Rumor has it a new alliance will be formed in Episode 3.14. And, it could be a dangerous one. While Victoria and Stevie are busy going to war against each other, Emily will be spending some quality time with her husband’s father Conrad Grayson. Victoria may not have to worry about Stevie, if Emily and Conrad team up to take her down, Stevie will be the least of her worries.