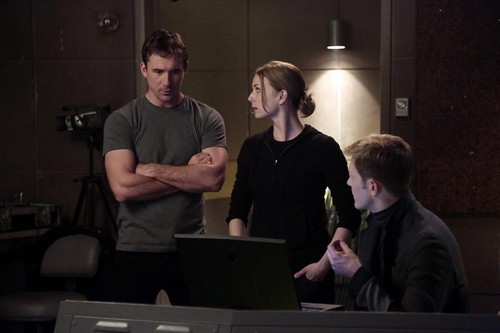 Revenge returned tonight to ABC with another great episode.  Are you enjoying this season as much as I am?  I cannot wait till next episode, and we have a sneak peek video and some insight for you below on what is going on next week’s episode called, “Impetus.”

On tonight’s show as all the Graysons slowly gained the upper hand, Emily was forced to take on a new identity to expose them.  Emily zeroed in on pascal, leading to a shocking outcome.  More happened!  If you missed the episode we have a full and detailed recap, right here for you.

Spoiler alert: If you’re one of those people who doesn’t like spoilers, stop readingnow! We have some juicy spoilers for you about the season 3 episode 21 of ABC’s “Impetus.” Synopsis follows.

ABC’s Official Synopsis: “Dire circumstance leads Emily to take extreme measures against both the Graysons and those closest to her.”

On next week’s episode Emily turns to extreme measures in an attempt to complete her mission.  “Impetus” was written by Gretchen J. Berg & Aaron Harberts and directed by J. Miller Tobin.

Revenge Season 3, Episode 21 “Impetus” airs on ABC on May 4th, 2014. Check out the preview videos and photos from episode 21 below and let us know in the comments below what you think!