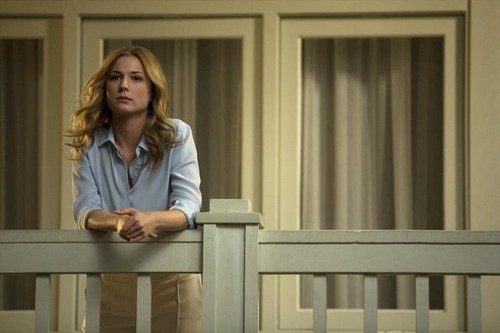 Revenge Spoilers for season 4 episode 6 ‘Damage’ promise viewers a hot and wildly entertaining time. ABC’s Revenge has been attempting to inject some much-needed life into the fourth season, especially as ratings continue to dwindle and the buzz surrounding the once-hot show dies down even further. We’re currently awaiting Episode 6 of Season 4, titled ‘Damage’. At this point, Madeleine Stowe and Emily VanCamp are the only reasons to keep watching this show, and I wouldn’t be surprised if ABC decided to wrap up the show after this season. As such, it’s not shocking that the writers are really giving it their all, and why the presumed-dead David Clarke made a [not-so-shocking] return from the dead.

ABC’s official synopsis for Season 4 Episode 6 ‘Damage’ is: “Charlotte’s downward spiral takes her to a place where even Emily worries she can’t be saved as David and Nolan have a very public reunion.”

Emily is obviously trying her best to learn as much as she possibly can about her father, who she assumed was dead all these years. In fact, the whole catalyst for this was David Clarke’s death, and why Emily Thorne [nee Amanda Clarke] went to such extremes to get revenge on the people responsible for her father’s death. However, it looks like the more Emily uncovers about her father, the more twists and turns she stumbles upon.

From the synopsis, it seems that David Clarke and Nolan – who worked together and had a very close relationship – are reunited. Nolan was the one that David entrusted his daughter’s safety to, and he’s the only one he trusted with Amanda’s fortune and future. Nolan is also one of the only people who’s known Emily’s true identity throughout this whole show, and it’s bound to be an emotional reunion. In fact, I can’t wait until Nolan, David, and Emily are all in the same room – after four seasons of heartbreak, death, and mayhem, it’ll be nice to see some happy family time, no?

What do you guys think about David Clarke alive? Is it a ridiculous way to inject some life into a dying show, or did the plot twist make sense to you? Let us know your thoughts in the comments below.