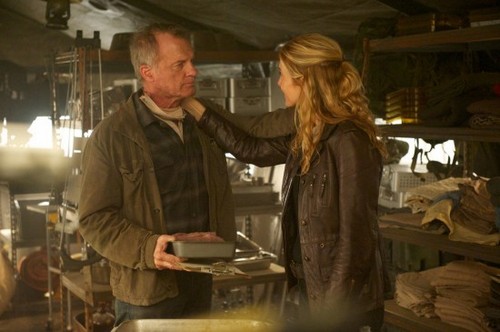 Tonight REVOLUTION returns to NBC with a whole new episode called “Captain Trips.”  On tonight’s episode Miles and Monroe continued to join forces in order to survive.  Did you see the last episode?  We did and we recapped it here for you!

In tonight’s episode, the gang (with the addition of Connor) returns to their quarter only to find neither Gene nor Charlie followed their directions by staying put. As for Aaron – he surely must be with the grandfather/granddaughter duo. Which leaves the rest of their group with no choice but to try and track them down. Even if that means risking their own lives in another rescue mission. Thankfully they don’t have to look very far. Their friends are predictable and will be wherever the Patriots are. Once they spotted Gene at the camp though, Monroe was quick to suspect Gene switched sides yet again. However Rachel noticed what was going on with the rest of the camp. Quickly they realized there was an epidemic.

One of them had to go down into the camp and couldn’t be Monroe or Miles. Connor was suggested, but he wasn’t going to risk his own life by helping people he’s never met. So Rachel went. She tried to hide under a face mask. And for a while it worked.

Still her face was recognizable especially to General Allenford. The only thing that saved her was that he actually needed her help. She was highly skilled scientist and hundreds are dying before a cure can get shipped out. Also she claims she came alone. This allowed the general to believe he has the upper hand. So much so he’s already threatened her with his own brand of questioning later on.

Meanwhile Aaron and Priscilla are still at Grace’s. Aaron was looking forward to talk to Grace when he saw her “Dear John” letter. Grace has done a runner. Apparently she had enough with the nanos and all the other weird things that have been going on. They were just too much for her. Aaron can understand seeing as the nanos are pushing his buttons too They reappeared to him. This time in the form of Cynthia.

All the nanos want is for him and Priscilla to go to some a small town in Texas. They don’t explain nor do they seem to care about the logistics. Aaron needs to go because they won’t stop pushing him until he does.

Julia is caught between a rock and hard place. Her husband has her son in custody and she doesn’t know what has become of him. It reminds her of the earlier days during the blackout. There was a time she nearly lost Jason and the only way they were able to save him was by using their smarts. They both learned how to kill when Jason needed them back then. She’s hoping they can pull off the same trick again. Julia got her husband to reveal that Jason is alive and his whereabouts. Anything else and she’s going to need Neville’s help.

Julia came up with a plan. They’re going to use her husband to get Jason out. As far as their plans go; no of that matters when Jason is in danger.

Back at the makeshift hospital, Rachel learned some troubling news about the virus. She noticed that it wasn’t acting like it should have been. The virus was acting like it was made rather than naturally mutated. She thinks the Patriots started this epidemic and it becomes more obvious after they notice who is actually getting sick. It was people with disorders or an addiction. Almost as if the Patriots were trying to weed out everyone that wasn’t perfect. Leaving the town that’s left to only have “pure” residents.

Rachel had only come to that conclusion when her dad started to show symptoms. The Patriots must have infected him without anyone knowing. Now, they really do need to find that cure.

The Patriots never sent for a cure. Miles, Monroe, and Connor raided their place hoping to find one and found the place empty. It’s a good thing there was a plan B. They kidnapped the General and infected him (Rachel was able to make serum just for him). If the General wants to live then he needs to tell them were the cure is.

Julia and Neville were caught. It seems her husband always had a tail on her so all those secrets meetings with Neville didn’t look good. He set them up and then he scared them. He asked Julia “what makes you think your son is even alive”. They don’t know about Jason’s fate or theirs seeing as they won’t be killed right away. Julia’s husband wants to play with them first.

Connor never wanted to help out with the whole epidemic thing. Monroe was the one to talk him into it. Connor went in with the general in a Patriots’ uniform. He was supposed to pick up the cure and come back, but the General trapped him. He warned his guards about the Connor and they ended up surrounding him.